Despite the best single-day performance in the US Dollar since March after this weekend’s G20 Summit, ASEAN currencies such as the Philippine Peso and also the Indian Rupee held their ground looking at the table below. The Greenback saw gains as the US and China agreed to restart trade negotiations, effectively resulting in a truce as Donald Trump withheld from raising further tariffs against Xi Jinping.

As a side effect, this also boosted regional ASEAN equities such as the PCOMP (Philippines Stock Exchange PSEI Index) and in South Asia the NIFTY 50 (India’s stock exchange index). Being sentiment-linked currencies, the uptick in market optimism helped to offset USD strength against PHP and INR. Though the Singapore Dollar fared worse as it tends to more closely track the US Dollar. 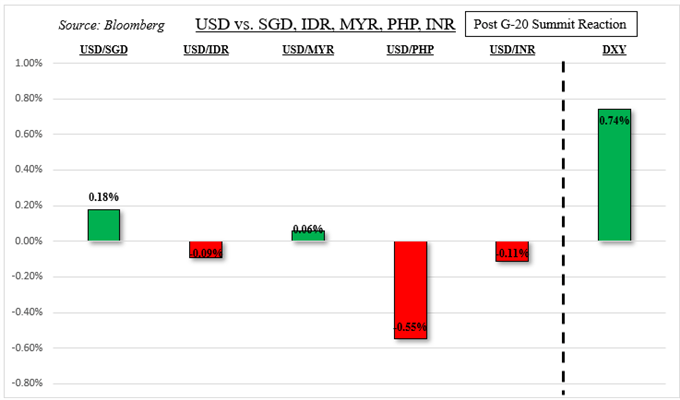 The backdrop of a cooldown in US-China trade war fears may continue boosting sentiment, especially in the Asia Pacific region. This is likely to keep providing upside support for domestic bourses such as in Malaysia and Indonesia as well. However, something to keep in mind of is how this could impact monetary policy in the United States.

In the first day of trading on Wall Street after the G20 Summit, we saw local front-end government bond yields rally. Coupled with better-than-expected ISM PMI data, this cooled some of the aggressive easing bets that the markets have been pricing in. As a result, the S&P 500, after gapping higher, spent most of its day trading lower. A less-dovish Fed should not be discounted for, and this may bolster the US Dollar.

Turning my attention to the Philippines, the PHP will be eyeing upcoming local inflation data. In June, Philippine CPI is expected to clock in at 2.8% y/y versus 3.2% prior. There could be an upside surprise due to the crude oil price rebound in June since the commodity is a key import for the nation. If that cools BSP rate cut expectations, that could boost the Philippine Peso.

Meanwhile, the INR is awaiting India’s fiscal 2020 deficit target, which is expected to clock in at 3.4% of GDP. A higher target could be tempting for Finance Minister Nirmala Sitharaman, due to slowing economic growth. But that could risk sending Indian bond yields higher and lower its sovereign credit rating, which could weaken the Indian Rupee. The RBI is already in easing mode, cutting rates this year.

Will US Jobs Report Disappoint?

On the whole, US economic data is still tending to increasingly underperform, opening the door to a softer-than-expected non-farm payrolls report at the end of this week. After seeing gains in the aftermath of the G20 Summit, the US Dollar could see near-term weakness if a weaker print rekindles Fed rate cut expectations. That may bolster some of its ASEAN currency counterparts.

Be mindful of the US Independence Day holiday on Thursday, which brings with it lower levels of liquidity and can translate into more aggressive volatility in stocks, currencies and commodities.