The Swedish Krona and Norwegian Krone face major external-event risk this week from the release of the FOMC meeting minutes, the ECB rate decision and commentary from Mario Draghi as well as the showdown of Brexit. Local CPI data out of Norway and Sweden will be also be released throughout the week in addition to other peripheral economic indicators.

USDSEK and USDNOK will be eyeing the release of the FOMC meeting minutes on Wednesday along with several key economic indicators spread throughout the week. The publication from the Fed will give investors a better idea of the central bank’s outlook for domestic and global growth, both of which have been declining.

The Fed has reiterated that it is in wait-and-see mode and has emphasized a patient approach to raising rates while the outlook remains unclear. If the meeting minutes reveal dovish overtones, it could send the US Dollar lower, though the Greenback may quickly reverse and catch a haven bid as investors panic over why the Fed has become more downbeat.

The following key US economic indicators will also be worth watching this week because of the potential impact they may have on USD-Nordic crosses and overall monetary policy from the Fed:

The ECB will announce its rate decision this week with markets pricing in a hold on rates. However, what investors may be more interested in is the commentary from central bank President Mario Draghi. At the last meeting on March 7, USDSEK jumped over one percent and reached a 17-year high with NOK following a similar pattern. 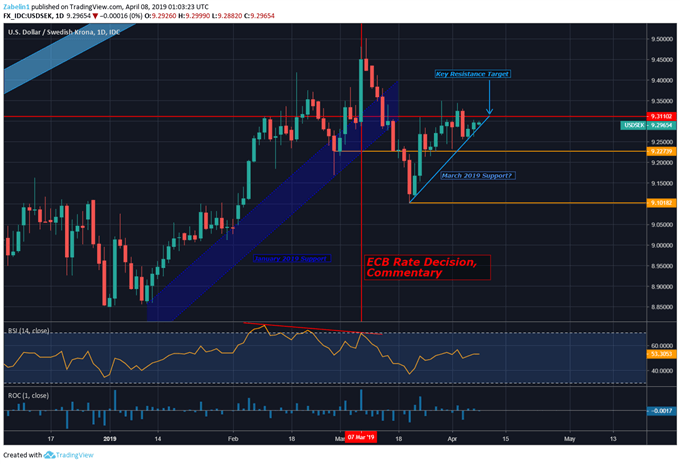 This is because Draghi’s outlook for Eurozone growth – Norway and Sweden’s largest trading partner – was substantially cut along with inflation forecasts due to the Continent’s unexpectedly rapid deceleration. As export-driven economies, Norway and Sweden’s performance is closely tied to growth trajectory of core Western Europe. As such, trends in SEK and NOK are also a reflection of European growth.

Another major event risk is Brexit. Unless Theresa May is able to secure an extension, the UK will be set to leave the EU on April 12. GBP traders are biting their nails as the probability of a no-deal Brexit continues to loom. On April 10, an emergency summit will be held with the 27 other member states to see if the process can be delayed further. UK Prime Minister Theresa May has asked to push the deadline to June 30.

Feeling lost on Brexit? Check out our infographic timeline here !

Local CPI data out of Sweden and Norway will be released roughly in the midst of the other major event risk this week and could end up being overshadowed and distort the impact these indicators would otherwise have under normal circumstances. Sweden’s economy has been suffering as policymakers attempt to grapple with a frustratingly weak Krona and growing risk from rising household indebtedness.

In Norway, economic performance has been relatively stronger, and central bank officials recently raised rates and intend on another hike in June. However, the Krone’s performance may be undercut if global slowdown fears materialize and European affairs further deteriorate. As an export-driven economy with a heavy reliance on the petroleum sector, the Krone and overall economic activity is sensitive to changes in global sentiment.

Norway’s sovereign wealth fund – the largest in the world – recently announced that they are reducing their exposure to emerging markets in the fund and considering adding renewable energy investments. As an oil-linked economy, the fund’s divestment from the cycle-sensitive commodity is perhaps a canary in the coal mine that global risk appetite may wane and put pressure on risk-loving assets and overall economic activity.

See DailyFX’s quarterly forecast about where crude oil prices may be heading in Q2 2019 !

EUR/USD At Risk of Retreat Below 1.05 Key Level
Advertisement