At the most recent policy meeting, Riksbank Governor Stefan Ingves gave off an unexpectedly upbeat tone and – relatively – hawkish outlook on policy going forward. The central bank kept the benchmark rate at -0.25 percent but reiterated that they are still looking to raise rates at least once in the latter half of the year.

‘It is the economic outlook and inflation prospects that will determine future monetary policy’ Ingves said. Looking past his comments on the Swedish economy’s strength and global developments now being in a ‘calmer phase’ the majority of the Riksbank board members don’t seem to share this same sentiment. One needn’t look further than the December policy meeting minutes to see other policymakers’ concerns.

Domestic risks from high household indebtedness combined with international risks from Brexit and the US-China trade war are still matters of concern. Markets appear to be betting that the Riksbank’s policy will be blown away by these headwinds and will compel the central bank to adjust its policy to a more dovish approach. 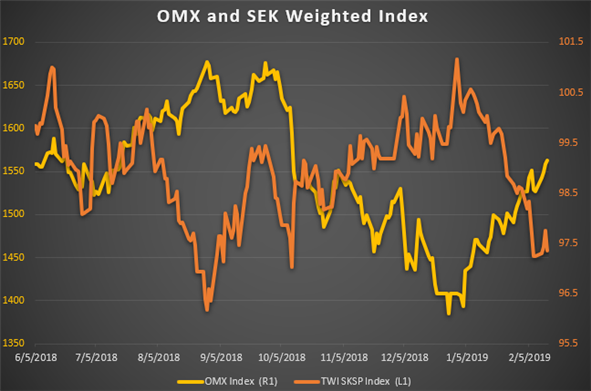 Despite SEK – measured here as a weighted index against a basket of other currencies – dropping along with Sweden’s economic performance, the country’s benchmark OMX equity index has continued to climb. This seems to complement the theory that investors are expecting for the central bank to implement a policy conducive for countering a slowdown in the business cycle via looser credit conditions. 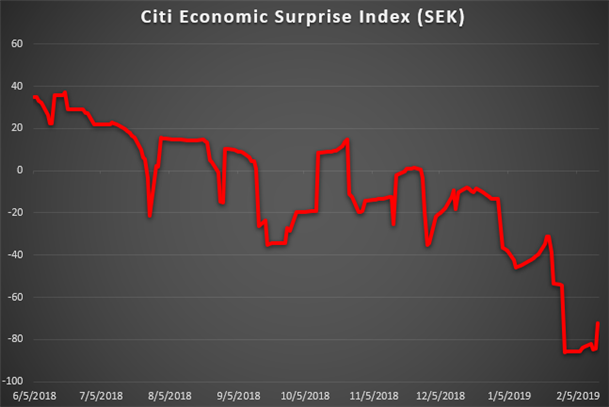 The potential turmoil in Europe may also play a bigger role in weighing on the Swedish economy. For the time being, markets appear to be kicking the proverbial can down the road and ignoring that the three largest Eurozone economies are slowing down faster than forecasts had suggested. The potential impact it may have on Sweden’s economy has to do with the unique political economy of EU-Nordic relations.

USD/SEK in this environment may rise as investors pivot away from chasing yields to preserving capital. The pair have skyrocketed through several resistance levels and are now trading above a key support at 9.2027. As of February 11, USD/SEK reached its highest point since December 2016. However, the pair in the coming days may cool down as it exits what appears to be overbought territory in the RSI indicator. 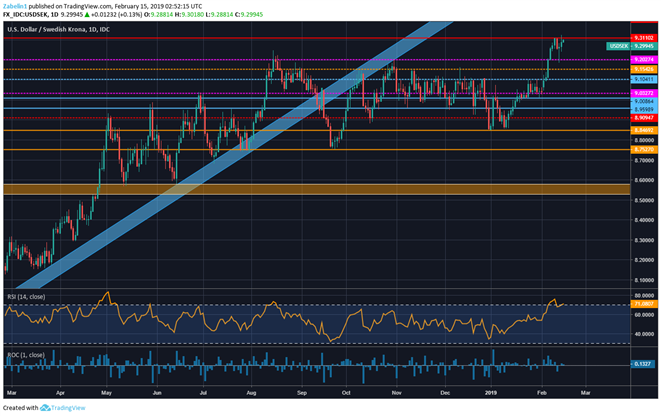 Within the coming months the pair may aim for 9.4066 with potentially minor resistance levels along the way. The broader fundamental outlook for global politics and the economy suggests investors may feel more skittish on the export-driven Krona and might instead flock to the US Dollar and Japanese Yen as risk appetite sours.