Last week, the US Dollar ended cautiously higher (if you are looking at DXY) and this was felt across most ASEAN currencies. The highly liquid and yielding Greenback saw seesawing price action as rising stock prices and ebbing haven demand competed for its attention. Factors such as weak economic data from Europe, mixed news on trade wars and the US avoiding going back into a shutdown all contributed to this.

The Indonesian Rupiah was the notable underperformer, falling with the Jakarta Stock Exchange Composite Index. This was partially due to Indonesian exports dropping the most since June 2017, with the trade deficit widening more than expected. The Malaysian Ringgit also depreciated despite a better-than-expected GDP report in Q4. The Bank of Malaysia noted that the MYR outlook could be affected by external uncertainties. 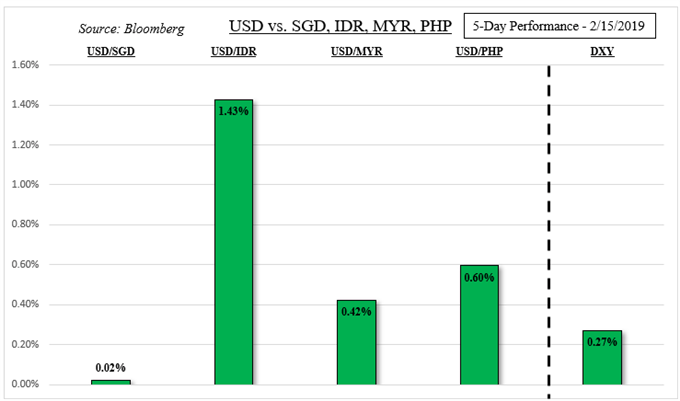 Next week, the regional and external economic event docket notably thins out. Most important, USD/IDR will be eyeing a Bank of Indonesia monetary policy announcement. Rates are anticipated to be left unchanged with inflation running within their parameters. Meanwhile, the Fed has considerably reduced its hawkish stance. Keep an eye out for what the Indonesian central bank has to say about the state of IDR.

They have consistently upheld that they see it as undervalued. As such, a lack of a clear-cut signal to hike again may not necessarily depreciate the Rupiah. Its performance will more likely depend on how the central bank feels about its performance which - granted - has been appreciating since October. Technically speaking, USD/IDR has cleared a key resistance barrier but intervention to keep it down presents a persistent threat.

For what may impact the US Dollar next week - and therefore USD/MYR - keep an eye on the FOMC minutes from the January monetary policy announcement. Reiteration of their more cautious approach may hurt the Greenback. Lately, more attention has been placed on European economic data after Italy went into a technical recession and Germany narrowly avoided one.

With that in mind, watch out for the German and Eurozone ZEW sentiment surveys. Data has been tending to underperform relative to economists’ expectations, opening the door to a downside surprise. If the US Dollar gains as equities turn lower, the Singapore Dollar may succumb to selling pressure relatively speaking. Fundamentally, the S&P 500 could be heading for a reversal in the medium term, which leaves equities vulnerable.