Despite a rally in the US Dollar last week triggered by a deterioration in sentiment, ASEAN currencies generally stood their ground excluding the Singapore Dollar (see chart below). Gains in the greenback were somewhat trimmed following the Bank of England ‘Super Thursday’ rate decision which boosted the British Pound. The Philippine Peso thus gained ground against USD, even after a mostly in-line BSP rate decision.

The Indonesian Rupiah ended the week little changed as expected, upheld by the Bank of Indonesia which sees its currency as undervalued. Arguably, it was the Malaysian Ringgit that showed the most resilience. After markets were closed for the Lunar New Year, Palm Oil futures (a key export for Malaysia) soared to their highest in about seven months. USD/MYR dropped sharply as a result. 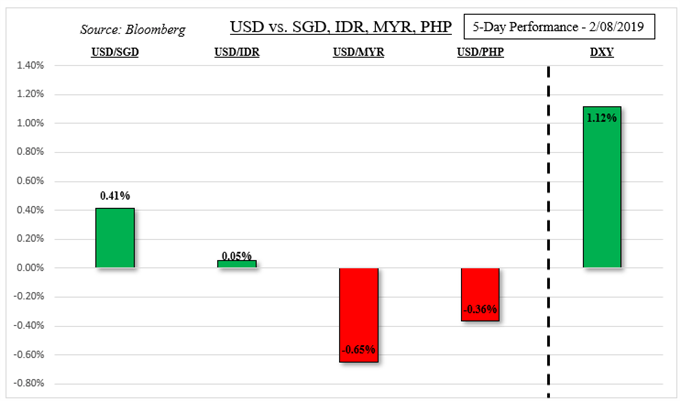 The week ahead contains a plethora of trade data from the Philippines, Malaysia, Indonesia and China. The focus will probably be on the latter to continue gauging the impact of the world’s second largest economy slowing. Malaysia will also release GDP data, but USD/MYR could concentrate more on external developments relating to the impact of sentiment on financial markets.

Here, delayed US inflation data may surprise to the upside (as has been the tendency lately), perhaps helping to reduce dovish Fed monetary policy expectations. That could extend declines seen in the S&P 500 as of late as may be fundamentally running out of reasons to rally. The highly liquid US Dollar could benefit from these developments, perhaps continuing pressuring SGD.

The Greenback may struggle against IDR given how heavily the Bank of Indonesia is intervening in foreign exchange markets. Additional political risks include the US reentering a government shutdown if funding for President Donald Trump’s border wall is not secured. He made a promise to construct it during last week’s rather uneventful State of the Union address. Meanwhile, the threat of a no deal Brexit inches closer.

The Philippine Peso could emerge unharmed next week if the monthly OPEC production report shows that despite continued supply cuts, demand could fall going forward as global growth slows. The commodity is a key import in the Philippine’s, the sharp decline in oil prices late last year bolstered PHP. If sentiment-sensitive oil prices fall with stocks and weakening demand, USD/PHP may rise.