PHP Eyes Busy Week, Asia Stocks at Risk if Sentiment Sours in US

A surprisingly dovish Fed caught the US Dollar off guard this past week as the S&P 500 climbed along with market optimism. In short, the central bank lowered the urgency to hike rates in the future but still reiterated their data-dependent policy approach. Expectations of just one hike this year plummeted as probabilities of a cut increased.

The focus for risk trends seemed to be on the Fed as a trade deal between US-China got pushed back to the “near future”, but talks seemed to be going well. This boded nicely for sentiment-oriented ASEAN currencies. Notable outperformers were the Indonesian Rupiah and Philippine Peso. Still, data out of the world’s second largest economy were mixed, continuing to raise concerns about a slowdown in China. 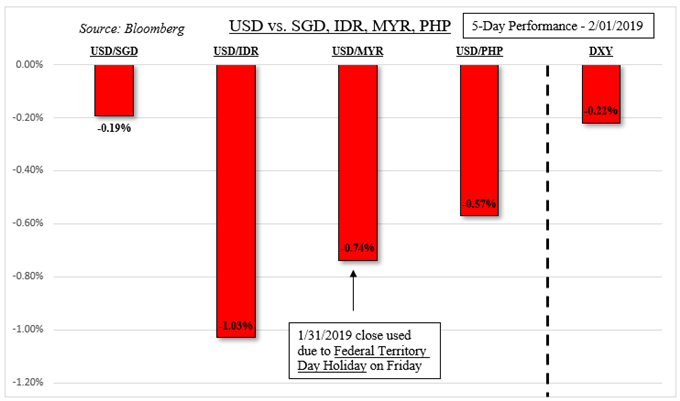 The week ahead is busy for the Philippine Peso which is facing January’s inflation report on Tuesday. Price growth is anticipated to keep slowing as CPI clocks in at 4.4% y/y, down from 5.1% in December. On the chart below, mild disinflation has accompanied gains in PHP against the US Dollar over the past couple of months. This helps to alleviate pressures the local central bank faces. 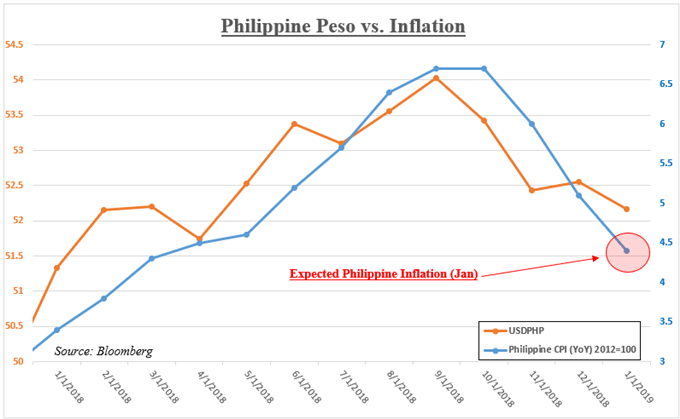 Speaking of, on Thursday the Philippine central bank monetary policy announcement will cross the wires. The BSP is anticipated to leave rates unchanged as it envisions inflation continuing to slow this year. This might be the case in the near-term as the impact of falling oil prices filter into the economy. After all, the commodity is a key import for the nation.

But, this may not last. Looking at the chart below, there has been a recovery in crude oil prices which occurred with gains on Wall Street and efforts from OPEC to reduce output. Since the beginning of this month, while the commodity and S&P 500 rose, USD/PHP swung. On the one hand, weakness in the US Dollar works in PHP’s favor. On the other, higher oil may reignite inflation pressures on the economy. 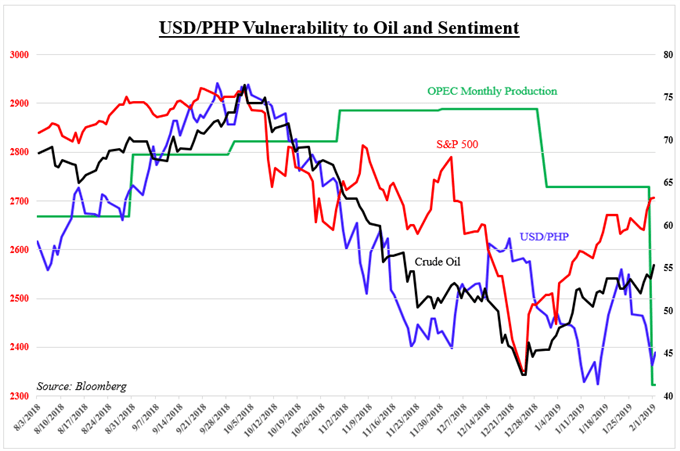 If Philippine inflation slows as expected, that may cool bets of further tightening to come from the BSP. That would give the US Dollar an opportunity to gain ground against PHP. Meanwhile, in Indonesia we will get Q4 GDP. Regardless of the outcome, the Bank of Indonesia has made it clear that it still sees the Rupiah as undervalued. As such, weakness in IDR prices may be countered by intervention from the central bank.

With a final deal on trade between the world’s largest economies coming in the near future, the focus shifts in the interim to external economic event risk for ASEAN currencies and sentiment. The first estimate of Q4 US GDP and PCE Core (the Fed’s preferred measure of inflation) is due to cross the wires. Local data has been tending to outperform relative to economists’ expectations as of late.

Such was the scenario last Friday on a stellar US jobs report that left the S&P 500 lower while the US Dollar and local government bond yields rose. This highlights the risks Wall Street is facing down the road as equities run out of reasons to rally. A downturn in market mood as domestic data beats expectations and boost the greenback could reverberate into Southeast Asian economies.