ASEAN currencies generally had another rosy week thanks to supportive news flow from the US. There, the US Dollar declined as caution from the Fed stressed the importance of being data depend. Stocks rose as the S&P 500 achieved its best winning streak since September 2018 with market mood continuing to improve. This is despite a lack of a clear cut outcome on US China trade talks and softening Chinese inflation. China’s Vice Premier, Lie He, is now scheduled to visit the US late in January for ongoing talks. 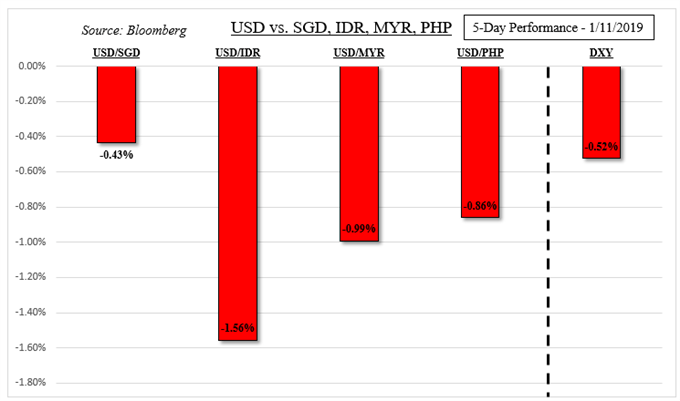 Looking at what to expect this week for emerging markets in the Southeastern Asia region, we will get Indonesian trade data as well as its central bank monetary policy announcement later on. The former is important for the latter because the Bank of Indonesia left rates unchanged back in late December. It sees policy levels as consistent with efforts to lower the current account deficit.

Trade balance, or net exports, is a key component of the current account. If the trade deficit shrinks, that would be in line with what the central bank anticipates. The Bank of Indonesia also expects the Fed to raise rates twice this year which the markets have completely priced out. A cautious Fed and a weaker USD is alleviating pressure on emerging markets with high amounts external debt.

As a result, this has allowed the Bank of Indonesia to accumulate foreign exchange reserves (see chart below) as its currency rose in recent weeks. But, the central bank still sees IDR as undervalued. With that in mind, it may leave the door open to hikes down the road in an effort drive the Rupiah higher. Don’t discount the data-dependent Fed though, streaks of rosy data out of the US may easily revive hawkish bets. 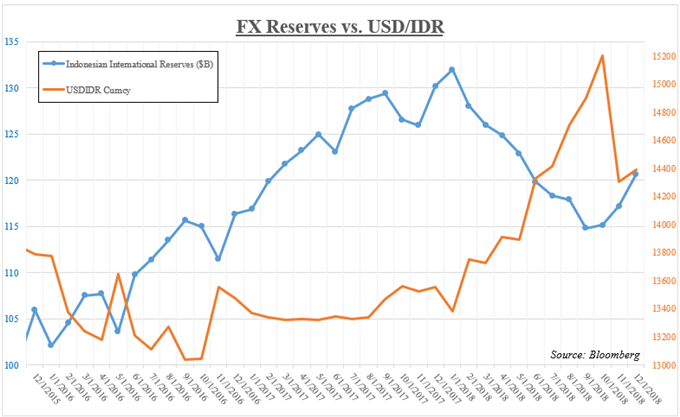 In regards to that aspect, watch out for US wholesale inflation, retail sales and Fed speak. Domestic economic news flow is still tending to underperform relative to economists’ expectations, but it has been by an increasingly smaller margin. Thus the downside risk for currencies such as the Malaysian Ringgit is rosy US data. Slowing economic growth on the other hand, both from the US and China, may also bode ill for oil prices to the benefit of crude importers such as the Philippines and for PHP prices.