The progress that we see unfold in the most liquid markets is the product of many different participants adding, removing or shorting exposure for a myriad of different reasons. This is why many technical traders have thrown in the towel with fundamentals, because it could be construed as insanity to presume that we can track the motivations of so many different traders and plot their intention. Yet, thankfully, the events and themes that we come across in an average day, week, month of trading are not imbued with the same degree of influence. This is why we attempt to garner a sense of intent and momentum behind 'risk trends' regularly - it is a universal constant when it comes to influence, though it is not always under power. Speculative appetite is more often a 'result' of one or many catalysts, so the next level of focus is on those themes that can trigger a deeper fault. Trade wars and the US government shutdown are two such options. The trade war has been spreading since January last year when President Trump started the ball rolling with tariffs on solar panels and washing machines. Fast forward to today and there are over $350 billion US and Chinese products that have import taxes applied to them. As the anniversary rolls around, there have been reports that US and Chinese negotiators are making progress, but there is little tangible evidence. That said, it has been suggested the President wants a resolution to help boost the stock market which doesn't even strain expectation considering he has attacked the Fed and rates to win favorable market response. Meanwhile, the US government shutdown is moving into its 21st day to match the record from 1995-1996. Even if this standoff is resolved tomorrow, the negative impact on GDP and sentiment has already made its mark - and we don't need further reason to question the stability of the financial system. The threat of the US losing its primacy as the world's financial hub and reserve is now entering mainstream. That may already ensure it happens, the question is how long it takes.

Powell Refuses the Dollar Another Convenient Push after EURUSD's Break

Risk trends via global equities, emerging markets and carry trade are still leaning higher over the span of the past week, but that doesn't override the trouble built up over the past months were benchmark indices dipped into 'bear market' territory just last month, and many other sentiment-based assets have suffered under the sense of fear for many more months, establishing far more significant losses. The S&P 500 is testing its bullish mettle at 2,600, but that is not an absolute line in the technical sands. Uncertainty persists with volatility elevated which will undermine the development of clear trends that don't have a direct line to heavy fundamental motivation and it will readily poke holes in otherwise textbook technical levels (without committing). Equities and explicit risk assets are not the only markets that are being undermined by a sense of uncertainty. EURUSD's break above 1.1500 (and the 100-day moving average) Wednesday was textbook but lighting the fuse doesn't necessarily mean explosion. The pair retraced much of its gains this past session - though former resistance still holds as support for now - and that shouldn't come as a surprise. From where would the charge continue to build momentum? The Dollar is carrying plenty of fundamental burden around its neck, but the market doesn't seem to be very concerned about the trade war backlash, government shutdown credit implications, sliding interest rate forecast and uncertainty of its safe haven capacity. When those themes kick back in, I will look for a more remarkable move from the Dollar and its benchmark pair. In the meantime, it is worth remaining skeptical and cautious. 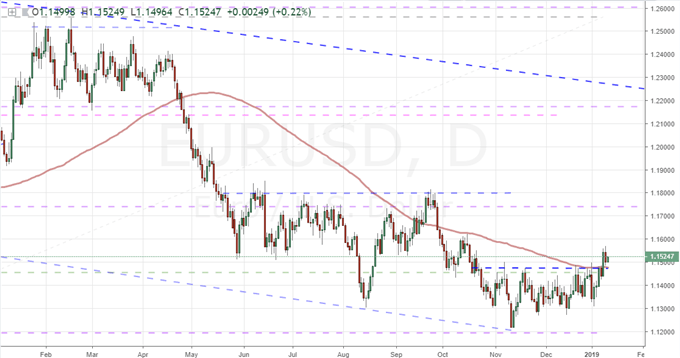 What Can the Pound Make of GDP with a Contentious Brexit Vote Beckoning Our Attention Forward?

The Sterling has made little progress over the past few months. That is true when we price the currency in Dollars, Euros or as an equally-weighted index. There have been a handful of high profile fundamental updates in both data and theme form, but they all pale in terms of influence relative to the potential of the impending Brexit. The Article 50 split officially occurs on March 29, but we are far past the speculated cutoff point to establish an agreement and get to work on the technical steps of sorting out the separation. Now, we are just waiting to see if the UK and EU can agree to a deal for economic and trade relations post-Brexit or the country will simply be severed from its collective counterparts. After Prime Minister May backed out of a vote on her proposal in Parliament last month, markets have eagerly awaited the follow up due January 15th. Leading up to this vote, there has been deep skepticism that her May's next effort will be able to win approval; and so, Parliament has been busy increasing its influence over the process should the threat of a 'no deal' outcome come to pass. Pressure for a general election and second referendum continues as a steady clip, but the government pushes back consistently. Nevertheless, the MPs have afforded themselves a say over the future should a no-deal be the only path and have made it necessary that May will have to come back with an alternative plan in only 3 days if her proposal is rejected. This is closing in on the end game, so would we expect traditional and limited-scope event risk to carry the Sterling to a meaningful trend with this hanging over the currency and economy's head? Remember that as we take in the UK's monthly GDP, trade balance, industrial production and construction activity data. 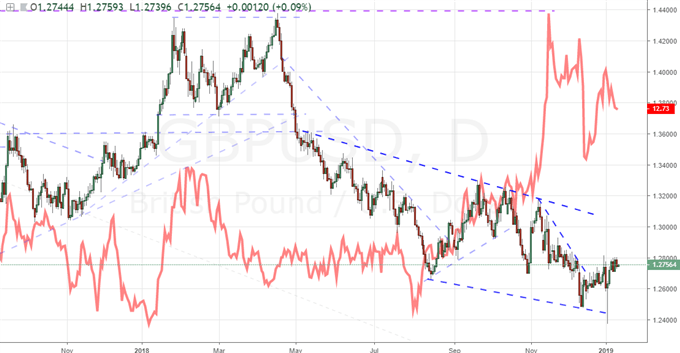 Canadian Dollar and Oil Slow Their Climb, Watch Risk for Your Guidelines

Much of what we are dealing with from risk assets to Dollar to Pound is uncertainty. Committing to a view on the market with the kind of open-ended threats facing these markets is highly unlikely - though not impossible. If you are looking for assets that may be able to generate a little more movement outside of these strong currents, there are options. The Canadian Dollar has been one such currency. USDCAD dropped aggressively this past week, but its six-day drive (matching the longest bearish move in 12 months) finally started to stall out this past session. Perhaps crude oil is once again playing a role in this pair's performance. The positive correlation between commodity and Loonie has returned. At the same time, crude has extended its own recovery to match the longest consecutive advance since December 2016. If the slow climb in the US indices - as a guide to risk trends - falls apart, don't expect crude oil (and by connection the Loonie) to continue their moves on their own. 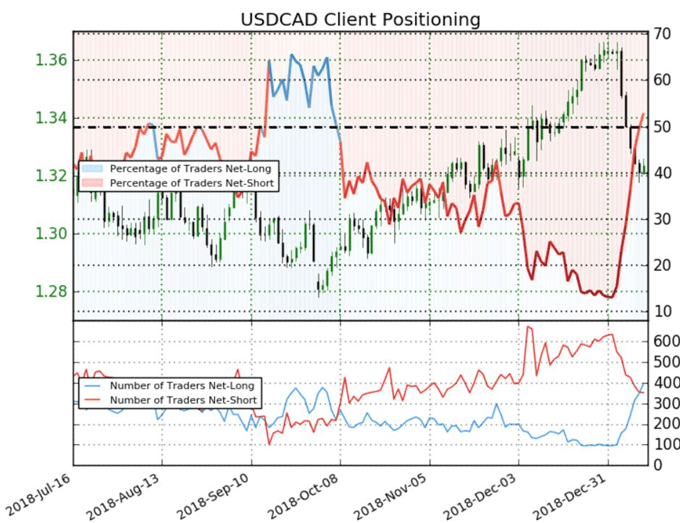