The Swedish Parliament will be officially voting on the Speaker of the Riksdag’s second formal proposal for Prime Minister on December 14. Stefan Lofven of the Social Democrats Party – who recently failed to create a government coalition after being ousted by a vote of no confidence – faces an almost certain rejection.

This comes after he failed to reach an agreement with the Center and Liberal parties to deliver center-right policies in exchange for support in parliament. If four proposed candidates for PM are rejected, it will trigger a snap election.

Additionally, his caretaker government’s budget proposal was also rejected on December 12. Instead, parliament passed a center-right budget put forth by the Moderates Party and Christian Democrats. It includes the biggest income tax cut since 2007, and is estimated to provide a 0.6-0.7 percentage points to GDP from the fiscal stimulus. This compares to the caretaker government’s so-called “neutral” budget that essentially would maintain the previous year’s framework. It was forecasted to only contribute 0.1-0.2 percentage points to GDP.

The adopted budget proposal will almost certainly provide a boost to Sweden’s slowing economy. Several inflation reports for November undershot the forecasts, consequently cooling rate hike bets for December. Markets are now pricing in February rate hike. This also comes against the backdrop of global uncertainty – particularly in Europe – and a “gloomy” GDP in Q3.

In the short term, as Sweden wrestles with gridlock and slow inflation likely until year-end, EUR/SEK may continue to rise. The 10.2858 price level may serve as temporary support in the near-term. However, heading into Q1, the Swedish Krona – supported by a rate hike and fiscal stimulus – may cause the currency to rise relative to the Euro, thereby exerting downward pressure on the pair. The next possible levels of support are 10.2538 and 10.2116. 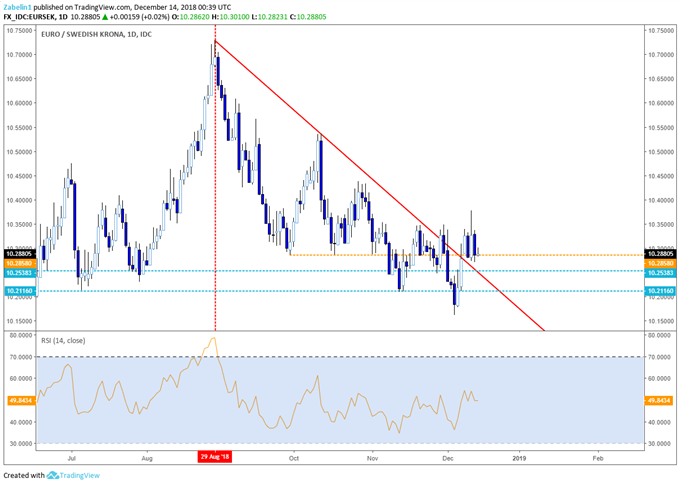 For further updates on global political economy and asset responses to geopolitical shifts, feel free to follow me on twitter @ZabelinDimitri where I frequently tweet updates before writing an article on it.