Hawkish Fed After US Midterms a Risk for PHP, IDR, MYR and SGD

A recovery in risk appetite this past week boded ill for the US Dollar, which depreciated as demand for liquid safe havens dropped. The S&P 500 and Dow Jones rallied following multiple bullish signals, ending the first few days in November on an upbeat after a shaky October. The backdrop for the improvement in market mood seemed to be ebbing US China trade war fears.

Not surprisingly, this boded well for ASEAN bloc currencies such as the Singapore Dollar and Philippine Peso. The Indonesian Rupiah also gained as the central bank reiterated efforts to maintain price stability while local CPI data crossed the wires 3.16% y/y in October versus 3.06% anticipated. But gains on the inflation data were fairly modest as the data remained within the central bank’s price target.

The Malaysian Ringgit saw temporary weakness after Prime Minister Mahathir Mohamad announced a wider-than-expected budget deficit target of 3.7% of GDP. This risks potentially hurting Malaysia’s credit rating, especially after the Prime Minister got rid of a 6% consumption tax shortly after he won the general election back in May. Slowing Chinese Manufacturing PMI seemed to pass without much notice. 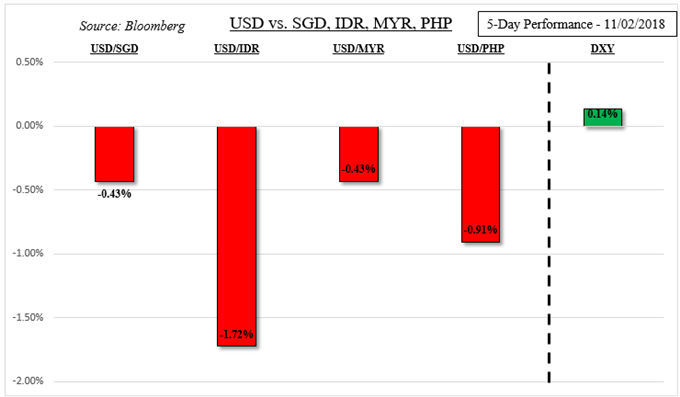 The week ahead is loaded with both regional and external event risk. Indonesia’s third quarter GDP will cross the wires on November 5th, economists’ are anticipating a slowdown to 5.18% y/y growth from 5.27%. But as with last week’s CPI data, the event may pass without much fireworks given a central bank that seems to be taking a break in its hiking cycle. Bank of Indonesia also envisioned higher foreign exchange reserves in October which will cross the wires next week along with data from neighboring countries.

Meanwhile the Philippine Peso will look to what could be more interesting inflation data. Philippine CPI is expected to clock in at 6.8% y/y in October, the highest since February 2009. Should prices keep rising away from the BSP’s target, rate hike expectations may drive USD/PHP lower. Not to mention that the weaker PHP since the beginning of this year puts upward pressure on prices. The Peso has already broken a critical rising support line, insinuating that the dominant uptrend might be over. 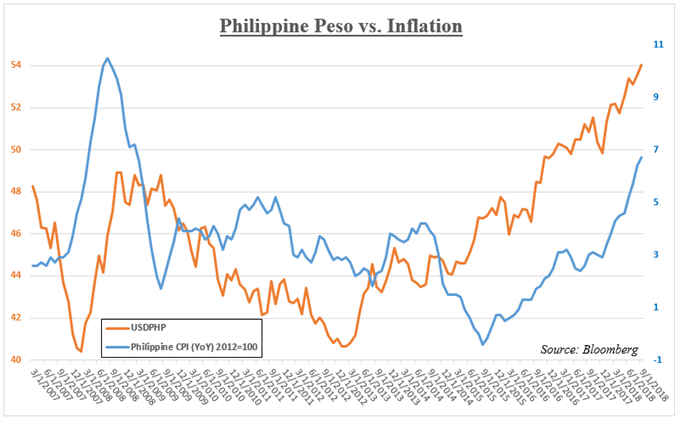 Externally, all eyes will be on the US midterms and Fed rate decision which could have lasting impacts on stocks and the US Dollar. The most likely outcome priced in for the former are Democrats taking control of the House of Representatives while Republicans hold the Senate. Such a scenario may have a limited adverse impact on stocks.

Regardless of the outcome in US elections, the Fed will still be on course to raise rates in the near-term. Fed Funds Futures are pricing in a 75% chance of a hike in December. As such, the central bank may use this week’s monetary policy announcement to prepare the markets for it and more, sending the US Dollar higher. US hourly earnings clocking in at their highest since March 2009 last week underpins this and may send stocks resuming their aggressive declines last month. This would bode ill for sentiment-linked ASEAN currencies.