As anticipated, Wall Street nearly wiping out its upside progress this year boded well for the US Dollar which thus had consequences for most ASEAN bloc currencies. The S&P 500 tumbled about 4.15% as US government bond prices rallied, signaling a flight to safety. In times of financial market stress as risk trends sour, the highly liquid greenback tends to perform well.

The Malaysian Ringgit, Indonesian Rupiah and Singapore Dollar depreciated against their US counterpart. Meanwhile the Bank of Indonesia left rates unchanged as expected and left a lack of urgency to adjust them until more data crosses the wires. The Philippine Peso on the other hand outperformed, particularly bolstered as the PSEi rose following a recovery on Wall Street Thursday. 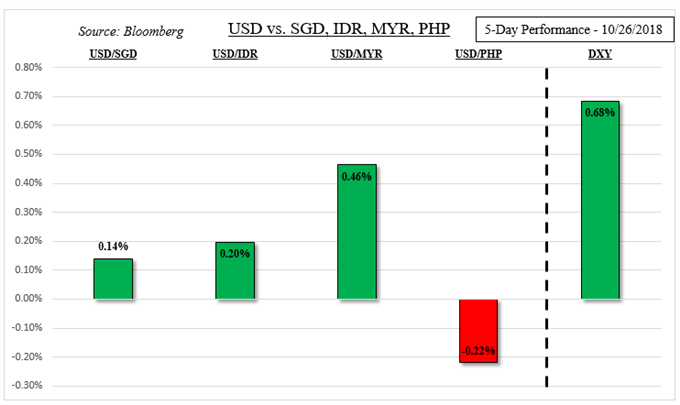 The week ahead is loaded with domestic and international event risk. Starting with the former, October’s Indonesian CPI data is due. Despite inflationary pressures from a weaker IDR, the county’s headline CPI rate has been in a steady decline since the latter half of 2017. Should this trend continue, it may lessen the scope for the central bank to raise rates again soon. After all, its message last week was that it will be guided by key economic data. 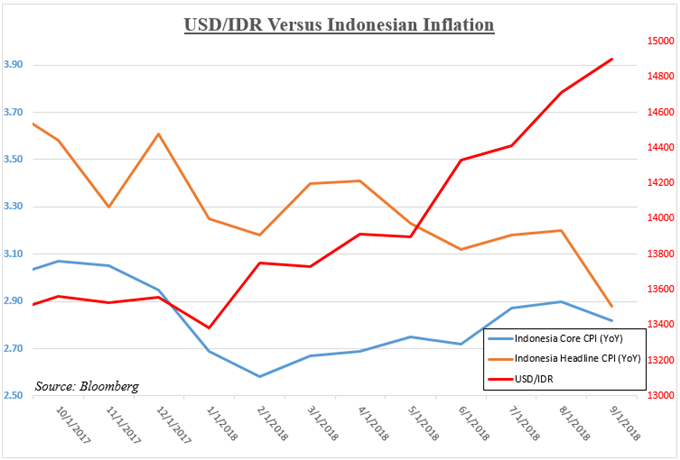 Malaysia will also be presenting the 2019 budget towards the end of this week. Earlier this month, Prime Minister Mahathir Mohamad trimmed GDP targets while widening budget deficit targets to about 3 percent of growth. This would reverse progress towards balancing the budget and Moody’s followed with concerning remarks.

According to a sovereign analyst from the agency, “the resultant increase in fiscal deficit is credit negative...departure from…steady deficit reduction”. This could place Malaysia’s credit rating at risk which may pressure the Ringgit lower. Since these updates, USD/MYR has been on a steady ascent. We have already seen rather reckless Italian budget proposals weighing on the Euro.

This week also contains Chinese Manufacturing PMI data which is a gauge of the health of the country’s industrial sector. A reading above 50 indicates expansion and 50.6 is expected which would be down from 50.8 prior. The survey has been on a steady decline since May as the economy continues slowing. China GDP clocked in at 6.5% y/y in Q3 2018, the lowest in roughly a decade. More of the same may pressure emerging markets lower and its neighboring nations may feel the pain.

Beyond that, sentiment-linked currencies such as the Philippine Peso may still be at risk to weakness in global stock markets if the rout continues. Externally, the US Dollar may get a boost from better-than-expected local jobs data as well as the Fed’s preferred measure of inflation. The risk of more greenback gains leaves USD/SGD, USD/PHP, USD/IDR and USD/SGD vulnerable.