A pullback in the US Dollar towards the end of last week resulted in ASEAN bloc currencies paring some of their losses against the Greenback. One particular standout was the Indonesian Rupiah which got some help from its associated central bank. The Bank of Indonesia surprised markets when it raised rates by 50 basis points to 5.25% from 4.75%. This was 0.25% higher than expected.

The unexpected outcome left its mark on IDR and a combination of USD weakness led USD/IDR lower. Bank of Indonesia shifted their stance to tightening and pledged to maintain pre-emptive monetary policy as they guard the Rupiah in line with the fundamentals. Meanwhile, the Singapore Dollar didn’t show much enthusiasm for a local inflation report as expected. There, CPI core was 1.5% y/y versus 1.4% anticipated.

More is to come this week from Indonesia where on Monday, we will get June’s inflation report. There, the headline rate is anticipated coming down to 3.00% y/y from 3.23%. In fact, from last week’s monetary policy announcement, the central bank forecasted inflation coming in between 2.5%-4.5% this year and next. Higher rates of inflation may bolster IDR and vice versa, but keep in mind that regardless of the outcome, the Bank of Indonesia is facing increasing pressure from a hawkish Fed.

In addition to Indonesia, later on this week we will also get Philippine inflation which could be more interesting. A couple of weeks ago, the Philippine central bank raised rates and cut 2018 inflation projections to 4.5% from 4.6%. In addition, it expects some disinflation in the year ahead as it allows prices to overshoot their 2%-4% target.

As far as this week’s CPI report is concerned, Bangko Sentral ng Pilipinas projects a worst case scenario of inflation clocking in at 5.1% y/y in June. The markets are expecting 4.8%. While faster CPI growth may inspire some PHP strength, it will probably take consistent inflation overshooting to worry the central bank which seems contempt with some higher prices in the meantime. Nevertheless, higher inflation is a step closer in that direction.

Finally, we will get foreign reserves towards the end of this week at an unspecified time on Friday. Malaysia, Indonesia and the Philippines are up while Singapore will have to wait until next week. These statistics are important for understanding how much associated central banks are fighting to keep their currencies elevated against a rising US Dollar.

The US Dollar Risk for ASEAN Bloc Currencies

Stronger domestic CPI could perhaps only offer temporary relief for ASEAN bloc currencies if a rising greenback continues pressuring them. On this front, we will get June’s employment report on Friday. There, markets will probably be looking for wage gains which may boost the US Dollar. In addition, do keep an eye out for signs of increasing trade war tensions between the US and China. The greenback may gain if traders seek safety given its liquid appeal. The US is expected to enact the first part of its $50b in Chinese import tariffs on Friday.

On a daily chart below, USD/PHP could be on the edge of a reversal. Despite its recent push higher up to the 76.4% Fibonacci extension at 53.90, RSI was not able to keep up with the ace and negative divergence has emerged. This suggests momentum to the upside is ebbing and the pair may turn lower ahead and if not, perhaps consolidate.

A reversal of the pair’s uptrend from the beginning of this year would need some confirmation though. The first step in this direction would be getting below 53.30 which is the June 22nd and 14th low. However, the pair may then stall above 52.93 which acted as resistance in May. It could reestablish itself as support though and confirmation of a reversal could be once we get below that. 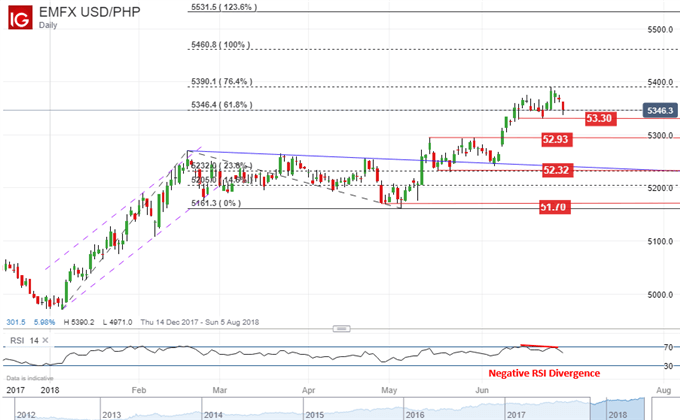