Find out what retail traders’ Euro buy and sell decisions say about the coming price trend!

Following a rosy day on Wall Street, most Asian benchmark indexes followed suit and were cautiously higher by Friday afternoon trade. Though most of the gains were quite sudden as news crossed the wires that European Union leaders reached a deal at their Brussels Summit on the issue of immigration. Sentiment improved as some political uncertainty was arguably reduced.

The measures EU leaders agreed on lessened concerns that there would be a standoff between Italy and the bloc. Earlier this month, the two anti-establishment parties (Five Star Movement, Northern League) came together to form a government. Their proposed reforms, if enacted, would violate some EU laws. Today’s agreement probably cooled some of those fears, perhaps paving the way to more agreements down the road.

Looking at equities, Japan’s Nikkei 225 rose about 0.13%. More aggressive were in China where the Shanghai Composite and CSI 300 climbed about 1.20% and 1.48% respectively. In Australia, the ASX 200 was little changed but favoring slight gains, industrials and health care were holding it down. South Korea’s KOSPI was up a little over a quarter of a percentage point.

On the FX side of things, the Euro was the clear champion with EUR/USD rising more than 0.4 percent following the news from Brussels. On the 15-minute chart, the pair had its largest move (up or down) since the ECB rate decision a couple of weeks ago. Not surprisingly, the US Dollar was down across the board, likely reflecting heightened demand for its European counterpart.

Sentiment-linked currencies like the Australian and New Zealand Dollars pushed higher. Though the latter has quite the distance to go to make up for its heavy losses in recent days. The anti-risk Japanese Yen plunged as a boost in risk appetite sunk the need for safety, it was the worst performing major at the time of this writing. USD/JPY was heading for a close above 2017 resistance. Such an outcome could pave the way for a resumption of its uptrend after impressive employment data.

A Look Ahead – Eurozone CPI, Canadian GDP and Fed’s Preferred Measure of Inflation

Friday’s remaining economic calendar docket is loaded with key event risk. Most notably, we will start with Eurozone CPI data. During Thursday’s European session, we had softer German inflation data which may be a preview for a worse-than-expected outcome on the aggregate figures. In addition, data out of the regional bloc has been tending to outperform for most of this year so far. Such an outcome could see the Euro give up some of its gains from the Asia session as ECB 2019 rate hike bets get pushed out further.

Then, we will get April’s Canadian GDP data. Growth is expected to slow to 2.5% y/y from 2.9%. Keep in mind, last week we also had a worse-than-expected local CPI outcome. Nevertheless, the Canadian Dollar held on to its gains as Bank of Canada’s Governor Stepen Poloz kept the door open to rate hikes despite rising concerns on trade war worries. With that in mind, perhaps CAD losses could be tamed in the bigger picture.

Finally and simultaneously, we will also get the Fed’s preferred measure of inflation. PCE Core is anticipated to rise 1.9% y/y in May from 1.8% in April. Such a result may bolster Fed hawkish expectations and boost the US Dollar.

On a daily chart, EUR/USD is still struggling to get below the May horizontal support and the news from Brussels has sent it rising back to the November/December 2017 lows. Simultaneously, positive RSI divergence warns that the pair is losing downside momentum and the pair may rise in the near-term. A close above resistance opens the door for a test of the June 14th high at 1.1852. On the other hand, a close below support exposes the 50% midpoint of the Fibonacci extension at 1.1400. 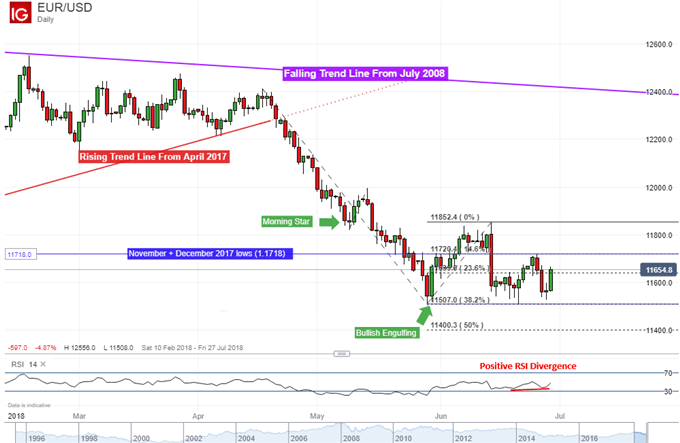