Early into the week, ASEAN currencies are finding themselves appreciating in the foreign exchange market. Their move higher followed a general pickup in sentiment where on Monday, the S&P 500 increased by the most since August 2015. Cooling trade war fears, thanks to US Trade Advisor Peter Navarro, seemed to have boosted confidence. Investors seem to be back in a mood for risk taking where they seek higher-yielding assets.

Going forward, developments out of the white house, which spooked investors last week, can leave Asia/Pacific currencies vulnerable if the mood suddenly sours again. Although Treasury Secretary Steven Mnuchin said recently that he is “cautiously hopeful” that China will reach a deal to avoid $50 billion in tariffs. Chinese Premier Li Keqiang said that the two countries should continue maintaining negotiations. We will see what happens.

Looking at the economic calendar, keep an eye out for the incoming February Hong Kong trade data. This is because for Singapore Dollar and Philippine Peso traders, Hong Kong is a major trading partner of the latter respective countries. Exports are expected to rise just 7.0% y/y, this would be less than January’s 18.1% increase. Lower trading activity in HK might have negative implications for the aforementioned currencies.

Later, Chinese Manufacturing PMI will cross the wires this weekend. China is a major trading partner for countries like Malaysia, Indonesia and Singapore. This means that economic conditions in the former country could have knock-on effects for the latter ones. With that in mind, a better-than-expected outcome could boost currencies like the Indonesian Rupiah or Malaysian Ringgit. Traders will have to wait until next week’s market open though if volatility is expected.

USD/SGD Technical Analysis: Trying to Make Progress to the Downside 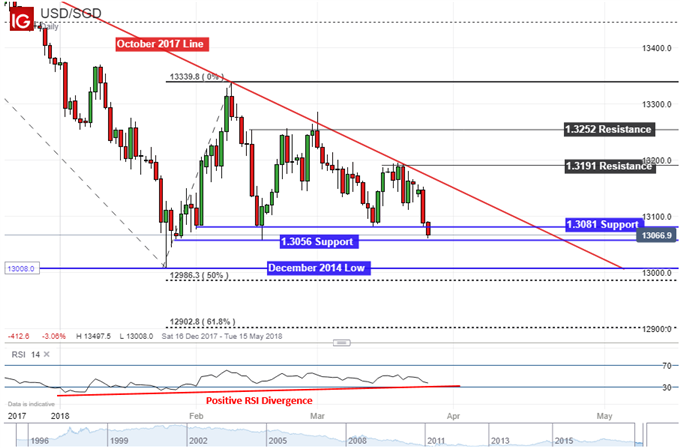 On a daily chart, USD/SGD seems to be pushing to the downside. However, Monday’s close brought it down to a stubborn horizontal support line at 1.3081 which has now held up for a fourth time. The next target seems to be another support line around 1.3056. A push below that exposes the December 2014 low at 1.3008.

For those looking at Singapore Dollar strength against its US counterpart, be mindful that positive RSI divergence has been accompanying USD/SGD’s descent since the beginning of this year. This suggests that downside momentum might be ebbing.

In the instance that USD/SGD reverses, immediate resistance appears to be the descending trend line from October 2017. A push above that will expose resistance around 1.3191, or the mid-March highs. Should USD/SGD clear that, the next target will be resistance at 1.3252 which held up through the second half of February. 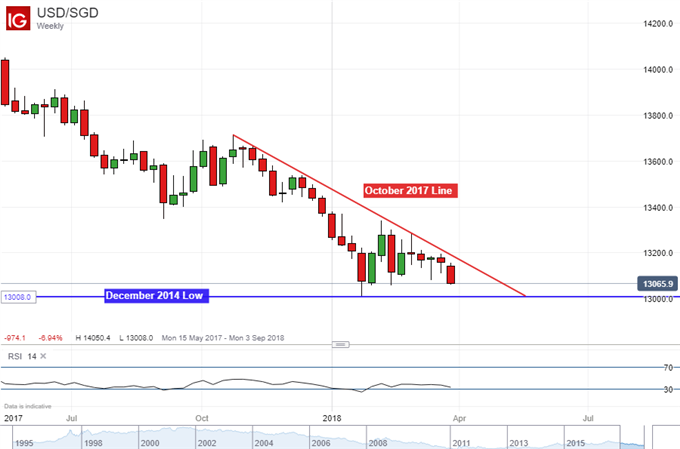 On a weekly chart, you can get a clearer picture of the “October 2017 line”. Keep a close eye on RSI here as well, positive divergence could emerge here if we get a close below the January lows.