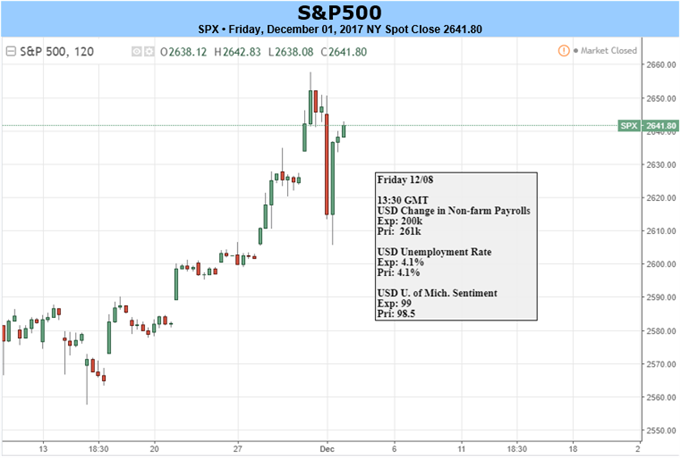 On Friday, markets were struck with significant volatility when it was announced that President Trump’s former national security adviser, Michael Flynn, pleaded guilty to the FBI for previously lying about involvement with the Russians. This will certainly be on the market’s mind heading into next week, potentially putting a damper-effect on any news related to a Tax Bill proposal. As far as ‘high’ impact data releases are concerned, Tuesday we have ISM Non-Manufacturing/Services and on Friday the bigger data-set of the week in the November jobs report. The economy is expected to have added 198k jobs during last month. For release details, check out the economic calendar.

The S&P 500 (and Dow) was in ‘blow-off’ mode for most of the week. As we discussed on Friday, the market action got wild as we saw a large rise in the VIX on Thursday while the market was well up over 1% on the day. Very unusual activity, indeed, and smacked of price instability. It comes at a very interesting juncture given the overhead trend-lines we have on the intermediate to long-term time-frame. (For full details on this, check out Friday’s commentary.) Next week we expect price action to heat up as the push-pull between both sides of the market carries out, especially given Friday’s very volatile headline-driven session. It looks as though sellers could gain the upper hand in the days ahead as the market is overdue for a pullback and at the same time showing signs it wants to do just that. Looking to the 2600-vicinity as a source of sizable support. It would seem a consolidation at this juncture will be best case. 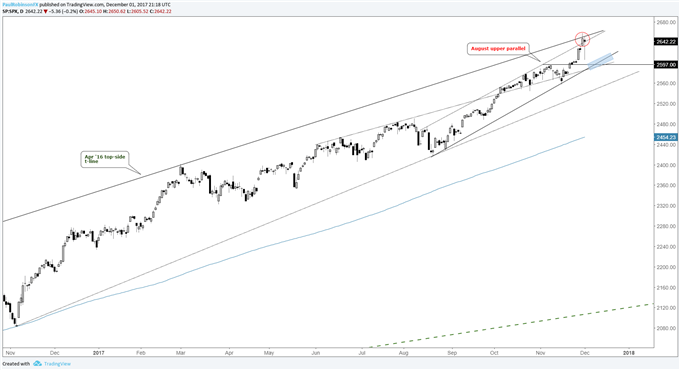 On Friday, the DAX was taking it on the chin, recovered, but then sold off into the close on the Flynn headline. As far as ‘high’ impact data releases, there are none on the calendar for next week. Risk trends and euro fluctuations will be on traders’ minds.

The DAX was trying to put in a bullish reversal-day to end the week after breaking down well below 12900 before the Flynn news hit the tape. The headline sunk the index into the close of the week and back below key support. Objectively, though, the DAX cash index didn’t have a chance to recover with U.S. equities (the futures did, however). In any case, should we see a continuation of Friday’s breakdown we’ll have eyes on swing-high in July at 12676 and then the trend-line running up from the low in June 2016. The 200-day MA arrives right in the vicinity of trend support and will likely strengthen it should the market sell-off to that point just above 12500. To turn the market posturing back bullish some work will need to be done. The recently volatile trading range is trying to resolve itself lower and will require a break firmly back above 13200 to change this outlook. 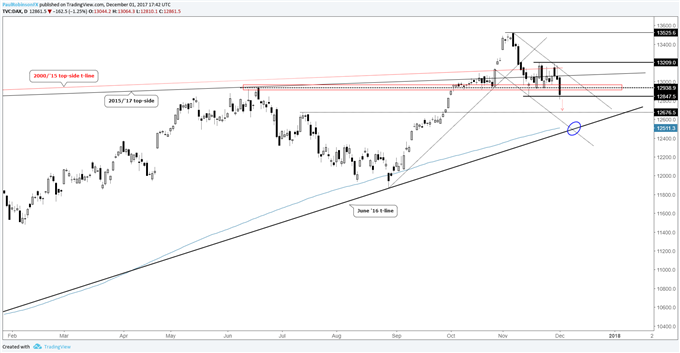 As was the case with the DAX, the FTSE also fell victim to headlines out of the U.S. It, too, was heading for a much better close on the Friday. The only high impact data release on the docket is slated for Friday, with the release of the November 12-month BoE/TNS Inflation data. The market will be focused on general risk trends, ‘Brexit’ headlines, and further drama unfolding out of the U.S.

The FTSE caved hard from Wednesday through Friday before getting an intra-day bounce from big support in the 7315/7290 vicinity on Friday. This was negated by news and the market will start the week trading somewhere around this key threshold. Further weakness below support will quickly bring into view the April trend-line passing under the September low, currently around the 7250-mark. Should ‘risk-off’ become aggressive 7196 and then big support down around 7100 could come into play. The 7100-area is a very big level of support given its significance starting over a year-ago. Turning the picture bullish will require a good deal of work at this point, but holding strong between 7250/7315 would be a start. The short-term trend won’t become favorable until we see a substantial bounce higher and hold on any dip. 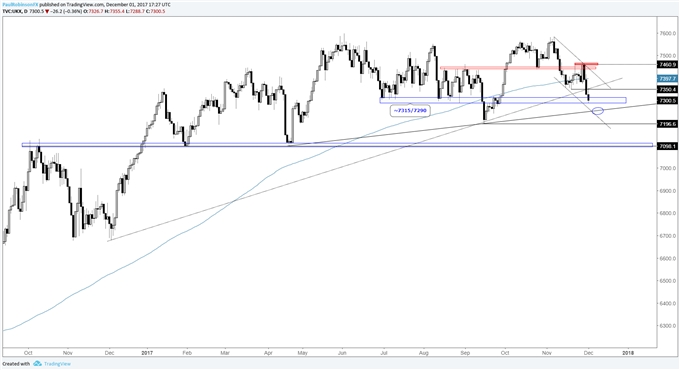