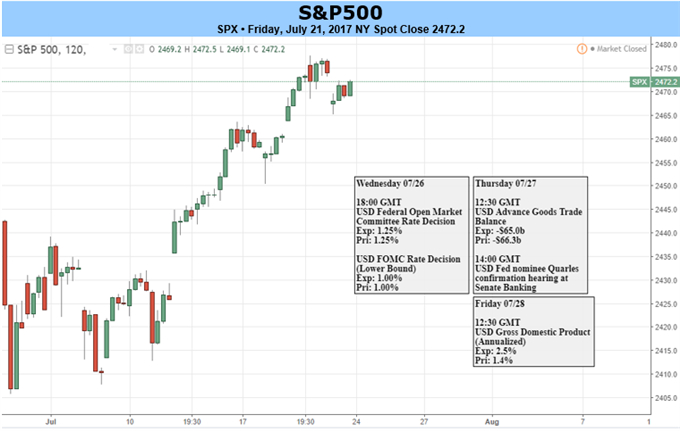 Last week, was a relatively uneventful one with fundamental catalysts in short supply. This coming week we have the FOMC rate decision on Wednesday, but with expectations set that the Fed will keep rates steady attention will be on any language changes in the policy statement. Yellen has held steady on the hawkish side but with the S&P 500 trading in record territory and even more-so the US Dollar Index selling off to eleven-month lows, markets aren’t taking Yellen and Co. too seriously. Markets will be looking for signaling in regards to the September meeting. (We’ll be covering the FOMC announcement live, you can sign up here to join.) Other ‘high’ impact data for the week include Durable Goods Orders and Advance Goods Trade Balance on Thursday and then Q2 GDP on Friday. For details, please see the economic calendar.

Technically speaking, the market is suspended in air between record highs at the November slope line and the March top-side trend-line it had no issue breaking on through on Wednesday. A small dip back towards the June record high at 2354 or period of consolidation around current levels would do the market some good in being able to gather steam for forging out new record levels later-on. It’s a tough spot from a risk/reward perspective given the lofty levels were at, and without a dip or consolidation we’re left in a position of patience in picking our spots wisely for long entries. As far as being a seller, interest won’t be there until we see strong down-side price action suggesting it’s the new path of least resistance; and even then, we’ll be cautious as sharp down-moves have been bought relatively soon after.

What key factors are driving global markets this quarter? Check out our Q3 Forecasts!

Last week brought traders a spat of much-desired volatility in the German index. The ECB made no changes and while Draghi was on the dovish-side the sharp rally by the euro following the ECB sparked a big sell-off in the DAX. More follow-through was seen on Friday as the market clearly doesn’t like the strength we are seeing in the euro. Looking ahead to next week, eyes will be on the Fed and any gyrations they may cause in U.S. equities; if a major move occurs in the S&P on Wednesday look for that volatility to spill over on the open Thursday. The calendar isn’t very heavy, with the only ‘high’ impact data set to be released is German CPI on Friday. See the economic calendar for details.

The DAX made a significant lower low from last month and in the process closed inside the gap from the first round of the French elections. Friday’s close was right at the neckline of the head-and-shoulders pattern we’ve been discussing as of late. The close inside the gap likely means the neckline will break upon a gap-fill down to 12048. Not far below the gap-fill lies the April swing-low at 11941, and then the 200-day at 11795 before seeing a possible measured move (based on the height of the H&S formation) down to ~11645. If the neckline isn’t firmly broken (seems unlikely given the gap) then an alternate path may need to be considered.

Last week, the Bank of Japan met and did as expected – nothing. As a result, we saw no volatility out of the Japanese benchmark. Looking ahead to next week the only ‘high’ impact data event on the radar is CPI on Thursday. Keep an eye on U.S. markets and how they react to the FOMC on Wednesday. For a run-down of all data releases for the week, please see the economic calendar.

Turning to the chart, the Nikkei is holding steady above the 20k mark and within the confines of a low-angled channel. A top-side trend-line running down off the 6/20 high is bringing price action to a point of convergence by forming a triangle. This could be set to resolve itself this coming week. The path of least resistance is higher, so a bullish break of the top-side trend-line would likely carry the index higher with the least amount of contest. A break lower will require slicing through support all way down to sub-19500. 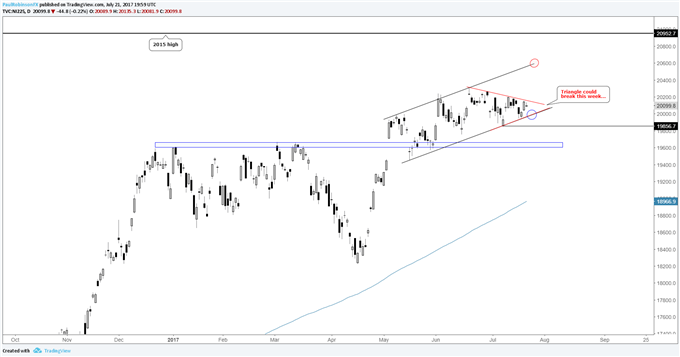