- Bitcoin (BTC) recording double-digit gains and more may be on the way according to one investment bank.

The value of digital currency heavyweight bitcoin hit a near two-week high on Thursday as worries over a potential split in the cryptocurrency continued to ease. And according to a technical note from investment bank Goldman Sachs, BTCUSD could beat the June 12 high of $3,000. In a client note sent earlier this week, analyst Sheba Jafari said that her minimum price target was now $2,988 with a potential upside of $3,691.

Thursday’s price surge also happened despite Coinbase, one of the largest digital exchanges, warning that they will suspend trading, withdrawals and deposits four hours ahead of a potential hard fork on August 1, 2017. The exchange added that they would not support any new blockchain or associated coin if a hard fork occurred.

A look at the dailyBTCUSD chart shows that the recent double-high on July 12-13 has been broken decisively, leaving the Fibonacci retracement of the My 12 – June 12 rally at $2668 very much in sight

While BTC dipped slightly early on before pushing higher, life in the Ethereum space has been characterised by wild swings as the digital currency slumped then jumped. Early on in the European session, ETH was dogged by reports that smart coding company Parity had issued an alert warning of vulnerability in its digital wallet with around 377,000 ethers at risk. And this latest hack follows on from an attack on CoinDash earlier in the week when around $10 million worth of ethers were stolen in an ICO. 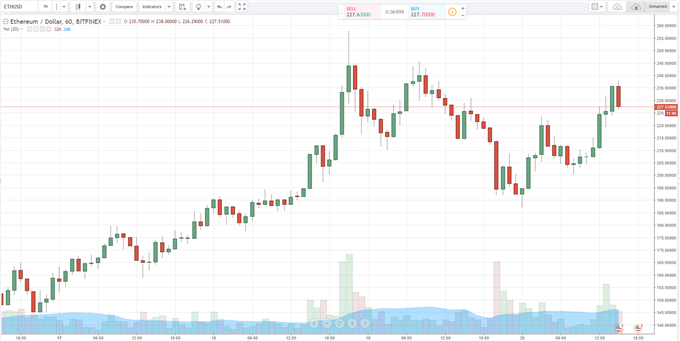