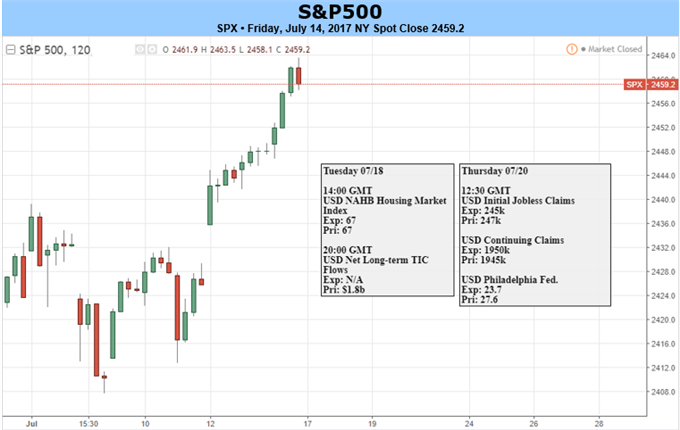 Last week, we had Yellen testimony, political noise out of Washington, and several key data releases on Friday to keep the market busy. Looking ahead to this coming week, there are no ‘high’ impact data releases slated for release. But these days you never do know what headlines could come out of Washington. For details on economic data releases, check out the economic calendar. General risk appetite and a raft of earnings releases from major S&P companies will likely be first and foremost on investors’ minds.

The market moved to a new record close on Friday. How do we trade a market which just broke out to new all-time highs? Chasing isn’t advisable, and especially not when there is resistance just ahead. The bottom-side of the November slope will quickly come into play, and is also in near confluence with a trend-line extending over from the March 1 high across the prior record high set in June. We’re only looking at 7 or so handles from Friday’s close before we are there. If the market can hold above the prior record high and not trade back below Friday’s low then it will be postured for higher prices, but may at first struggle to print new levels with the beforementioned lines standing in the way. 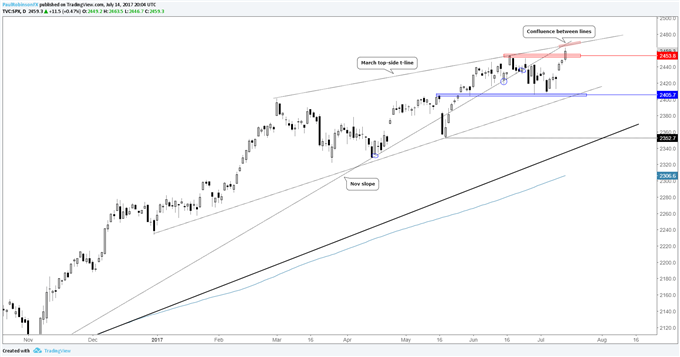 In the week ahead we have ZEW survey data due out on Tuesday for Germany and the Euro-zone along with the ECB Bank Lending Survey, but the big event of the week is the ECB meeting on Thursday. No major policy changes are expected but the market will be looking for signaling on what the central bank’s intentions are with its asset purchase program. Any material reaction in the markets is likely to be most felt in the euro and rates, but if the euro has a large one-way move look for the DAX to react in opposite fashion. For other ‘low’ and ‘medium’ impact events, see the economic calendar.

Last week, the DAX was set up precariously as it traded under resistance surrounding 12500 and just above the French election gap. But then it sprung higher on Wednesday, which pushed the index to another area of resistance just below 12700. Range levels carved out during periods in May and June are providing resistance as the new week begins. The big risk is this – a right shoulder of a three-month head-and-shoulders develops. We discussed this in detail on Friday, but the pattern won’t have full validation until it breaks the neckline (which is also right around the April gap), so while a topping scenario is certainly on the table it will require proper price action to validate. U.S. equities are strong, with the S&P 500 trading into record territory; so on that, through a generally healthy appetite for stocks a bearish bias may be put to rest, and the DAX will continue on higher to test (or break) its own record levels. Next week could certainly be a pivotal one. 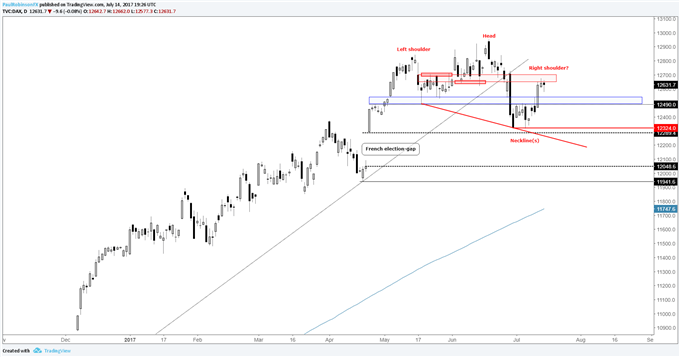 The Bank of Japan meets on Thursday which will be wrapped up by the BoJ’s governor, Kuroda, speaking at a press conference beginning at 6:30 am GMT time. Expectations are for the central bank to make no changes to its current monetary policy nor for Kuroda to say anything which will have a material impact on the market. But as per usual, manage risk as if anything can happen. For the full docket of ‘low’ and ‘medium’ impact events, please refer to the calendar.

From a technical standpoint, the Nikkei has been one of the more difficult indices to get a handle on. Choppy trading has generally dominated market conditions for the better part of the year so far. Once above 20k back in early June it looked like a clean shot to the 2015 highs at just under 21k, but price action has been anything but clean. Since the April to May rip the index has been working its way higher in a channel, and as long as it stays within this channel the overall bias is bullish but with muted expectations. A drop below the lower parallel and 7/7 low at 19856 would cast a bearish cloud over the Nikkei and likely lead to probing of lower levels. If global appetite for stocks perks up (U.S. stocks are in good shape) we could finally see the 2015 highs come into view at some point. 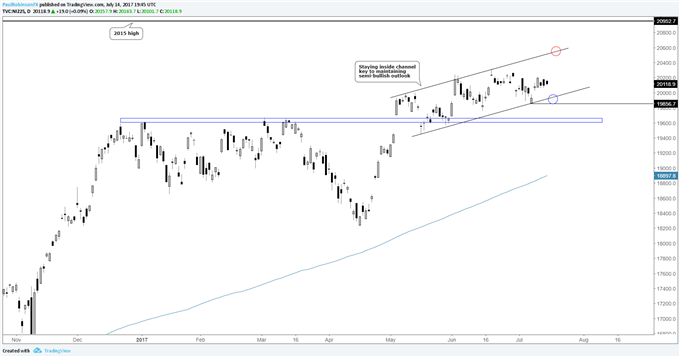