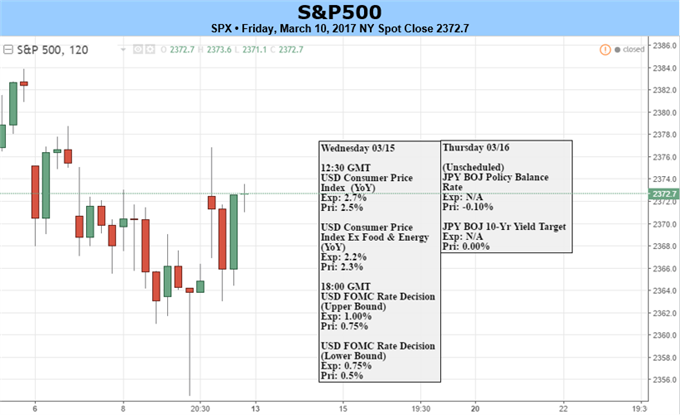 Global equity indices ended neutral to slightly off for the week. The ECB met on Thursday and held on their path for monetary policy as expected, with Mario Draghi saying nothing to spark any significant volatility in European markets. The U.S. jobs report on Friday showed the U.S. economy adding 227k new jobs in February, compared to market expectations of 200k. U.S. index futures initially reacted higher in pre-market trade but then weakened a bit once the cash markets opened. Looking ahead to next week, we have a few important economic events, with the FOMC rate decision front and center on Wednesday, and to a lesser degree the BoJ on Thursday.

In the U.S., all ‘high’ impact economic events are slated for Wednesday outside of the UofM Confidence Survey on Friday. Wednesday kicks off with the February Consumer Price Index (CPI) and Advance Retail Sales figures in the earlier part of the day, but markets are unlikely to react much with the FOMC rate decision later in the day. The market is pricing in a nearly 100% chance of a 25-bps rate hike, so barring a 0 or 50-bps move, attention will be on the language of the Fed and any forward guidance.

Turning to the charts, the S&P 500 gradually declined into the Feb ’16 trend-line which has passed through price action and acted as an inflection point on several occasions in recent months. The market very nearly came to the 2/24 day low, as well. The reversal on Thursday from support is somewhat encouraging for keeping the trend pointed higher. With another smallish decline or move side-ways the trend-line off the November low could come into play in conjunction with the Feb ’16 t-line. We will look to this as support this coming week; and if the market should drop below both lines of support and the Thursday low of 2354, we’ll abandon our neutral to bullish bias in favor of more weakness.

The big event out of Japan will come on Thursday, with the BoJ meeting. Expectations are for a fairly benign outcome, with the central bank not expected to make any changes to current policy. However, with that said, as per usual, expect the unexpected and manage risk accordingly.

Thus far this year, the Nikkei has been a laggard among major global indices, with all its gains effectively coming on the first day of trade in January. It’s been consolidating since, and while it had a false breakout from a symmetrical triangle to start the month, it’s poised to make a run at higher prices from a slightly different variation of the pattern – an ascending wedge. The target over the near-term is the 20k mark, which isn’t just a psychological level, but an important swing-high created back in 2015 when the Japanese index traded up to 20012. The depth of the wedge points to a more sanguine outcome, as the measured move target (MMT) is about 900 points higher, or 20300 from Friday’s close. Keep an eye on USDJPY, the two run together, and while not in lockstep in terms of performance the correlation is generally quite high (current 21-day correlation = 54%). 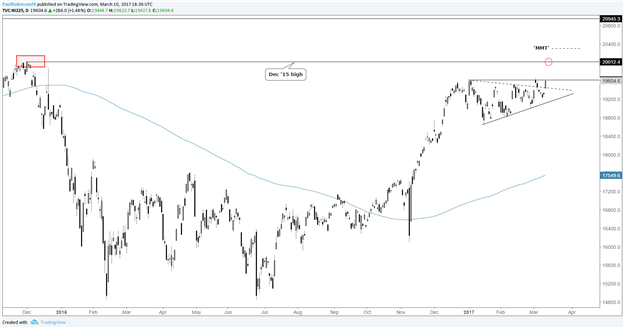 There isn’t a whole lot of key data this week out of Germany or the Eurozone, with the only ‘high’ impact data slated for Tuesday when the German ZEW Survey will be released. The market will likely focus on how risk markets perform surrounding the FOMC and BoJ meetings.

Turning to the techs: The DAX is hanging on by a thread to key trend-line support rising up from the December swing low. The trend-line was thoroughly tested to end February and taken to task once again this past week; this makes it the ‘line-in-the-sand’ for longs. The convergence of top-side and bottom-side trend-lines is creating a rising wedge scenario, which could lead to an explosive move one way or another upon triggering. We’re getting close. A top-side break of overhead trend-lines originating from peaks in 2016 would likely lead to a test or better of the 12391 record highs set in 2015. Conversely, a break of the wedge to the down-side, which will also involve a break of the all-important December trend-line, could lead to a rush of selling as the market is caught ‘leaning the wrong the way’.