Again, this week the DAX put the December trend-line to the test, teetering on the brink of breaking it over the course of the past two sessions. But so far, so good. The outcome from yesterday’s ECB meeting was relatively benign and thus had limited impact on financial markets – namely the euro and European equity indices.

With this week’s hold of the trend-line rising up from the December swing low, further importance has been added to its presence since the last test at the end of February. It’s our ‘line-in-the-sand’ as far as we are concerned. A close below the trend-line and the most recent swing low at 11918 would quickly switch us from bull to bear.

Running with the notion of higher prices, what lies ahead? Those ‘pesky’ top-side trend-line running higher off a pair of peaks in 2016 still remain in the way of reaching record highs near 12400.

We’ve made mention in passing about a potential pattern development, but now that we are reaching towards its maturity it’s time to take it more seriously. A rising wedge is quickly closing in on full development; it should be there next week. These patterns are known to lead to explosive moves after price action spends a period of time coiling up. A rising wedge forming after an extended move higher (like now) can lead to a sharp decline should it trigger to the downside. Often times these formations in the context of a maturing bull-run are considered a bearish development, but not necessarily so. A break above the top-side of the wedge would also involve a breakout above the beforementioned 2016 trend-lines, which would be the opposite of bearish. A breakout would be viewed as the market’s opportunity to reach and exceed the 2015 record highs.

For now, we are running with support acting as, well, support. It is until it isn’t. But the DAX will soon be facing off with resistance in the form of the Feb high of 12082 and then the top of the rising wedge/2016 trend-lines. As far as the rising wedge goes, we will go with which ever direction it breaks – a pattern to react to, not predict. 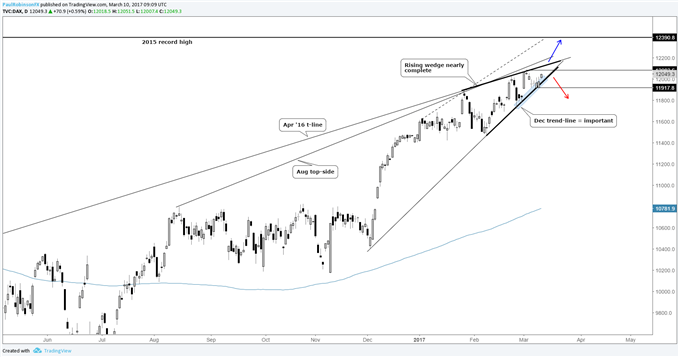