- GDP/USD hit a one-month low on Tuesday on Brexit uncertainty.

- Disappointing UK borrowing figures maintain the pressure on the Pound.

The British Pound is under renewed pressure this week as Brexit fears coupled with Britain's public sector debt hitting a record high heighten fears of another big move lower for the currency.

GBP/USD hit a one-month low of 1.2311 Tuesday after Scotland’s First Minister Nicola Sturgeon roused fears among traders that the UK’s Brexit process will be rocky and uncertain. She said Scotland will try to stay in the EU’s single market even if the UK decides to leave. Also yesterday, UK Prime Minister Theresa May signaled her backing for a transitional Brexit period, which would avoid the in-one-day-out-the-next cliff edge that worries many in the markets.

On the calendar side, early today came disappointing UK borrowing data for November, showing that, although the amount borrowed was smaller than in the previous month, the national debt hit a new record high of £1.655 trillion ($2.04 trillion), equivalent to 84.5% of GDP. This could suggest the beginning of a period where spending replaces natural economic growth, reversing the efforts to bring down debt over recent years.

Data released Wednesday also provided more evidence that UK consumer spending continues to show resilience in the face of Brexit fears. Figures from the CBI for the November 24 to December 13 period showed 51% of retailers reported that sales volumes were up, compared to 16% that said they were down, giving a balance of plus 35%. That was better than the previous month's performance and beat economists' expectations of a slight slowdown.

A European Union court ruling later on Wednesday on a proposed trade deal between the EU and Singapore again threatens to illustrate the difficulties the UK could face in the future. The European Court of Justice will decide on whether Singapore needs approval from all member states to get a trade deal. If it does, it implies the UK will similarly need to negotiate trade deals with 27 individual countries, which could scupper the prime minister’s hopes of signing a full Brexit deal in 18 months after she formally triggers Brexit talks using Article 50 of the Lisbon Treaty by the end of March.

In corporate news, Lloyds Bank also announced it is to buy the credit card company MBNA, which indicates the company is confident about continued UK consumer strength.’’

Generally, the British Pound remains under pressure (particularly via EUR/GBP and GBP/JPY today),though GBP/USD is currently trading at around 1.2380 in Wednesday trading as it digests these political, economic, and financial developments ahead of the holidays. 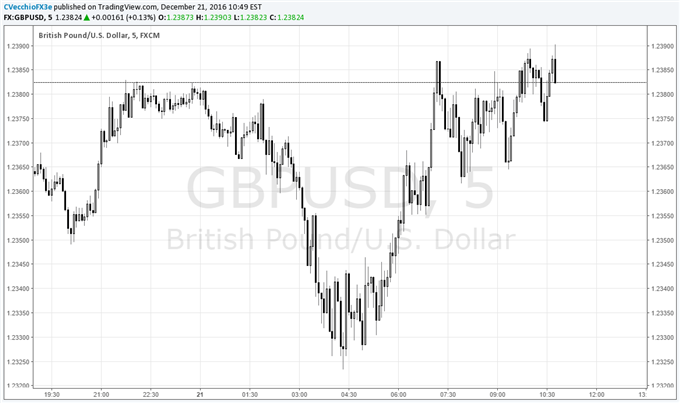 Looking ahead, UK GfK consumer confidence data are out Thursday, although, like the CBI data, they are not top tier enough to have the potential to lift the Pound if they too beat estimates.

EUR/USD At Risk of Retreat Below 1.05 Key Level
Advertisement