Brexit Briefing: British Pound Under Pressure as May, Sturgeon Clash

- UK Prime Minister Theresa May says if Scotland were to become independent it would no longer be in the EU. Scotland’s First Minister Nicola Sturgeon wants EU market access and more power.

- The British Pound, caught in the cross-fire, is under pressure.

Both UK Prime Minister Theresa May and Nicola Sturgeon, who heads the devolved Scottish government in Edinburgh, set out their Brexit positions on Tuesday – and their visions could hardly have been more different.

May signaled her backing for a transitional Brexit period, which would avoid the in-one-day-out-the-next cliff edge that worries many in the markets. However, questioned by Members of Parliament on the Liaison Committee, she also said that if Scotland were to become independent it would no longer be an EU member. She said too that she sees no need for the Scottish government to hold another independence referendum.

That’s a very different view from that of Sturgeon, who heads the pro-independence Scottish National Party. She said she wants Scotland to stay in the EU’s single market after the UK leaves the bloc and that she will press for more powers to protect Scotland’s interests. She was speaking after the publication by the devolved government of a paper entitled Scotland’s Place in Europe, which includes the option of independence from the rest of the UK.

Against this background, as predicted by DailyFX, UK assets were mostly weaker on Tuesday. GBPUSD fell for a second successive day, while EURGBP climbed for the second day running and the yield on the 10-year benchmark UK government bond moved higher. The exception was the FTSE 100 index of the largest London-listed companies’ share prices, which was barely changed. 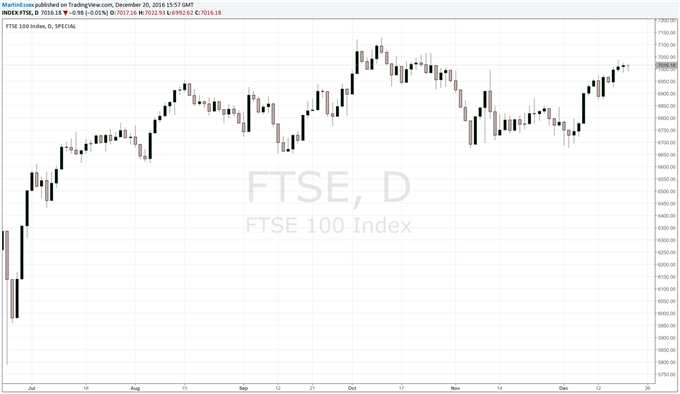 Meanwhile, there are still few signs of the UK economy suffering from Brexit. The latest Distributive Trades Survey from the Confederation of British Industry pointed to buoyant consumer spending in the fourth quarter of the year.