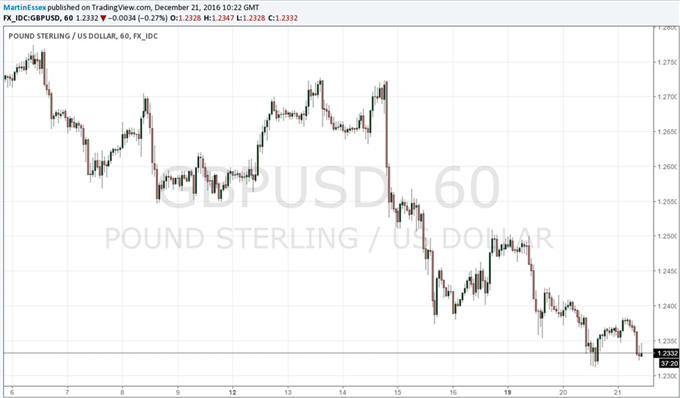 - GBP/USD holds steady after UK public borrowing figures even though they miss expectations.

GBPUSD was stable on Wednesday despite news that UK public sector net borrowing (PSNB) hit £12.2 billion in November; higher than both the £11.6 billion expected and the £4.3 billion recorded in October, when it benefited from a strong tax take. Excluding the banking sector, PSNB was £12.6 billion, also higher than both the £12.2 billion forecast and the previous £4.8 billion.

On the day Chancellor of the Exchequer Philip Hammond released his Autumn Statement on November 23, the UK’s independent Office for Budget Responsibility revised upwards its borrowing forecasts for the current financial year. The OBR estimated that the public sector will borrow £68.2 billion during the financial year ending March 2017; a reduction of £4.0 billion on the financial year ending March 2016. The improvement in the public finances in November leaves borrowing on track to meet the OBR’s Autumn Statement forecasts for the current fiscal year.

The currency pair was trading at 1.2342 half an hour after the figures were released, barely changed from its level immediately before the data. It has fallen from a recent high of 1.2775 on December 6 but, as the New Year approaches, there’s a possibility that it could now rally on profit-taking.