Trading Opportunities of 2016: This is Finally the Year that Stock Prices May Tumble

In the six years of ZIRP-fueled gains after the Financial Collapse, there have been no shortage of calls for stocks to ‘crash’ or ‘meltdown’ under the premise that the recession in 2008 (triggered by the Financial Collapse) was cut short by the deft movement of the Federal Reserve’s emergency-like policy. This was essentially based on the expectation around business cycles, and the fact that economies ebb and flow in a somewhat organic manner. And just like the pendulum of a clock, the further you pull on a backswing, the more velocity it carries moving forward. In the minds of many, the Federal Reserve has been holding back the proverbial pendulum for the better part of six years and when this thing starts its swing in the other direction: look out.

While this all might sound really attractive, it’s not a trade. These are just ideas. And that’s what so many of these short-calls have lacked over the past five or six years; tradeable information and a logical mannerism for actually trading that theme in a manner that doesn’t centralize around ‘hope’ and ‘guessing.’ Stock markets were continuing to climb and continuing to put in all-time highs: Any short calls in a market that’s continuing to bubble higher are, at best, a guess.

But something peculiar has happened this year: We’ve seen down-side volatility come back in a way that we haven’t seen since 2011. And in 2011 as QE2 was coming to an end, equity markets began selling off for fear that the global economy wasn’t yet ready to withstand a non-QE environment. But after a brutal July and August, the Federal Reserve announced Operation Twist on September 21st 2011, and stocks catapulted higher and continued to run for the better part of the next four years, in which the S&P essentially doubled in value (from a low of 1,073.90 to a high of 2137.1). On the below chart, we’ve denoted this period in the market when QE2 came to an end and before Operation Twist was triggered from the Federal Reserve.

It’s the second red box on the above chart that makes this a trade-able setup. As the Federal Reserve tapered asset purchases in October of 2014, equities began to pull back on the same fear that we had in 2011: That the global economy likely wouldn’t run as smoothly without the support of the world’s largest Central Bank. But during that ‘Taper Tantrum,’ we heard from numerous Fed members that ensured the world that a lack of QE or tapering asset purchases would necessarily lead directly into higher rates. The S&P rallied from a near-term low at 1,818 to set a new all-time high at 2,137.10. But throughout much of 2015 the world struggled with the idea of the United States finally raising rates. And while this struggle around US rate hikes was taking place, even more troubling developments popped up as commodities sold off in an inglorious fashion while China began to face significant headwinds. This is like a perfect storm of risk that presents significantly more problematic factors than we had in 2007. And this time, the Federal Reserve doesn’t have the same type of firepower since they’ve spent the last six years building a $4.5 trillion portfolio. That is what is different this time: the Federal Reserve has already expressed a desire to ‘normalize’ policy, and we’re not going to get the same element of support from the world’s largest national Central Bank. So the next time we get a shock-factor, like a taper tantrum, don’t expect to hear statements of ‘looser for longer’ in the same way that we’ve become accustomed to over the past 6 years.

As we’ve spent much of the year looking at that prospect of a less-forgiving monetary environment out of the United States, the S&P has continued to put in a series of lower-highs, respecting that 2,137.1 top put in earlier in the summer. Coincidentally, this is but 1.5 handles (S&P points) away from the 61.8% extension of the Financial Collapse move, which could be another indication of a top already being in place. To trade a reversal in the S&P going into 2016, traders can look to place stops above that top. In the effort of avoiding getting ‘wicked’ out of a trade should those previous highs become tested, traders can look to nest that stop above 2,150, which is the next near psychological level after the 2,137.1 high.

On the profit target side, traders can look to the Fibonacci retracements that have played out with a strong degree of consistency in the 4th quarter of this year. This Fibonacci setup can be found by marking the 2,137.1 top down to the ‘China Black Monday’ low of 1,833.50 on August 24th. After that low was set and as the S&P came screaming back, we’ve seen considerable resistance and support at each of these intervals. And because they’ve provided such consistent support on the way up, they can serve as very opportunistic targets on the way lower. The below chart illustrates the setup: 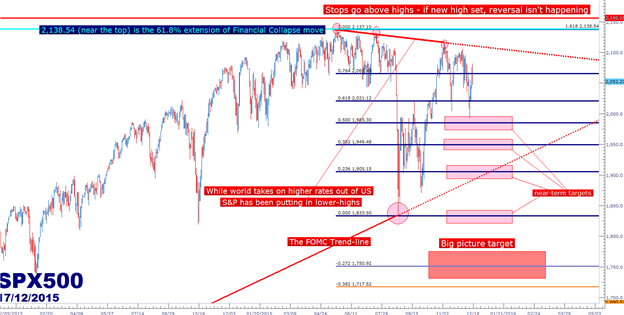 See the next Top Trade Opportunities in 2016: If a Base is in, EURGBP Could be a Juicy Long