One of the most popular Wall Street quotes came from famed investor Warren Buffett:

We looked at static levels in our first article in the series, and moved on to look at more subjective forms of analysis through Fibonacci and Price Action.

We then showed traders how to manage risk using Support and Resistance, and then how to trigger and initiate positions.

In this article, we’re going to investigate the topic that many traders spend the rest of their careers attempting to optimize: Position management.

These two emotions are a constant in a trader’s psyche, and this even shows up in The Number One Mistake Forex Traders Make.

In this research study, we saw how traders take such huge losses when they’re wrong while getting very small winners when they’re right. This was so pronounced that in some cases, traders can be winning two out of three times (66% success ratio), but STILL lose money.

A natural question after seeing such a glaring deficiency is ‘who is managing these trades?’ But think about it for a moment – do you think that these traders went into positions saying ‘I’ll lose $2 or $3 if I’m wrong but I’ll be happy with $1 if I’m right.’

While this may have happened from one or two new traders expecting to get a 90 or 95% winning percentage; but more likely is that many of these traders entered a position without a plan. They entered a trade based on hope; thinking that some catalyst would equate to a price movement.

Think about this from your own perspective: It’s just human nature to see a small gain and get afraid that prices will reverse on you. That feeling of excitement of seeing a winner can turn to despair as a trend moves against your position.

Many traders will follow their gut-instinct and close out the position. This is being fearful when, in-fact, this trader should be greedy. Their analysis has proven correct. They have a profit in the position and all of their hard work has proved sufficient up-to-that-point; yet the close out the position after a small gain? After all, nobody ever went broke taking profits, right? Not so fast…

Think about the opposite of this scenario: Imagine that you open your trading platform and notice that a position has made a massive move against you. Once again, human nature takes over as most human minds will begin negotiating and plotting. ‘I’ll let this trade work back to my entry price and then I’ll close it out; and I’ll never trade without a stop again.’

Or perhaps something along the lines of ‘I know there is an ECB meeting later tonight, and that presents a good opportunity for prices to make their way back… I think I’ll just wait it out.’

Well, this is when a trader wants to be fearful. The position did the opposite of what was expected: The analysis behind the trade has proven incorrect, and the very act of staying in that position is being greedy when, in-fact, fear should be significantly more prominent.

Traders need to strike a balance between Greed and Fear

Taken from The Greed-Fear Continuum

How to Use Support and Resistance to Handle Greed and Fear

Many traders will spend their entire careers attempting to get ahold of their own emotions, which is something that can probably be said for many adults in this world.

In trading, the consequences of failing to do so can bring on significant economic hardship. If you just follow your emotions and ‘gut-instinct’ you likely won’t be trading for very long as no human being can tell the future; whether a position has already been triggered or not.

The very act of being in a trade doesn’t make it any more likely that you’ll be able to forecast future price movements. In the situation in which the position moves against the trader and the they hold on in the trade hoping, pleading, or maybe even praying for prices to come back to their original entry price; well their analysis up-to-that-point has been incorrect. Why would you want to ‘throw good money after bad?’

And if your analysis has proven correct thus far, why would you want to take off the entire position? What if prices move further in your favor? If prices do continue doing what they’ve been doing, you’ve just left money on the table in one of the situations in which your analysis did work out properly.

Greed and fear can be addressed with proper planning. The trader needs to plot their exits for the trade before they ever consider the entry. This means that when any trade is placed, the stop is placed along with it. This is the trader’s lifeline – this is what allows them to stay alive and trade another day even when their analysis proves incorrect.

The very act of having a stop should begin to help the trader as they define the line-in-the-sand with which they’ll use to stop the bleeding should the trade idea not work out properly.

The trader can then use support and resistance to plot profit targets and exits if the position works out in their favor. The most simplistic permutation of such an action would to be to place a limit along with the stop when entering the position.

With this method, the trader can look to enforce a favorable risk-reward ratio by placing a limit at least as large as the initial stop distance.

After the Trade has been Triggered

After the trader has initiated the position and placed a protective stop, they still have options in the management of the position.

As we had discussed previously, the competing prospects of greed and fear will often become obstacles for most traders, especially while in a trade. Why not use trade management to try to address this potential issue?

When traders have a small gain in a position, they’ll often be fearful of watching that winning trade turn around on them to become a loss. So, many of these traders will just close the trade to take a smaller profit target rather than letting the position work in the manner they had intended.

But once again, this is where traders want to look to be greedy. Their analysis has worked out thus far, and the trade has shown a profit… but this fear is a very real human emotion.

Rather than just closing the trade out and taking all of the profit off the table, why not try to ‘have your cake and eat it too?’

The trader can look to ‘scale out’ of the position by closing a portion of the trade; leaving the rest on to move to the original profit target objective. That way, if prices turn-around, the trader has, at the very least, taken profits on a piece of the position so they have something to show for their investment of time.

Scaling-Out of positions can allow traders to capture more upside 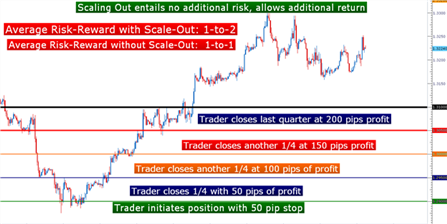 Taken from How to Scale-Out of Positions

And traders can further look to address this fear by moving their stops to their original entry price. The break-even stop allows the trader an element of comfort in the fact that should prices reverse, their stop order has been adjusted so that they shouldn’t face a significant loss on the position (or remainder of the position if the trader has begun to scale out of the trade).

If the position continues moving in the trader’s favor, many options become available. They can continue to scale out of the position at progressively larger profit intervals.

Alternatively, as the position works in their favor, they can look to add to the positions with additional entries. This is often called ‘scaling-in’ and affords the trader the opportunity to build a position as the trade idea prove more and more correct (by moving in their favor). 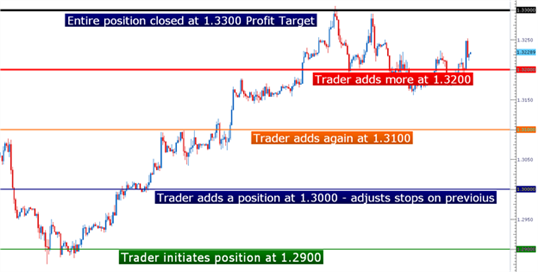 Taken from How to Scale-In to Positions