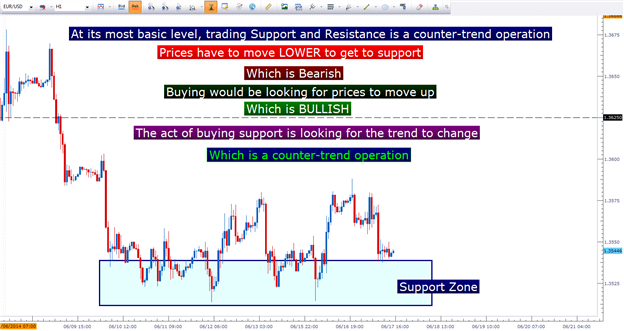 Pragmatic Usage of Support and Resistance

In our last three articles, we’ve discussed the topic of support and resistance.

In our first piece, we showed traders how to identify static levels of support and resistance using tools like Pivot Points and Psychological Whole Numbers.

In our second piece, we Looked Down the Rabbit Hole of Fibonacci.

In our most recent article, we integrated price action as a validator as well as an additional method of Support/Resistance identification.

Now we’re on to the fun stuff – learning how to actually use support and resistance in a trading approach. We’ll cover this topic in-depth over our next three articles. If you’d like to be notified upon each article’s availability, you are more than welcome to join my distribution list completely free-of-charge with the link below:

Think about it for a moment – if you’re going to go long in a market after support has been met, prices have recently come down to get to that support level, right?

So, the very act of you buying is going against the grain; at least the most recent grain as prices have been coming down and you’re looking for prices to move up (in the opposite direction of the recent price action).

This is, by nature, risky because you’re expecting something to change. If that change doesn’t happen, and if the trend continues in the way that it has been moving (lower), then you’ll be wrong and you’ll have a losing position on your hands.

This is, in-and-of-itself, not all that much of a bad thing. But the way many traders, especially new traders approach the situation can bring massively damaging consequences. And that is entering the trade without a stop and expecting that change to just take place. So if the change in direction (trend) doesn’t take happen, the trader sits on a losing position that just continues to eat away at their equity until they get to a point with which they can’t allow it to bleed any longer.

This is a major mistake in planning. Price action is unpredictable, and a trader should have their exits plotted before ever even thinking of the entry; and this is where Support and Resistance can bring significant value.

Support and Resistance with Risk Management

At its very root, support and resistance analysis shows us areas where prices may reverse. As mentioned, price action is unpredictable; but this provides a theory or idea that traders may be able to look for price direction to change.

It’s when prices don’t respond by moving higher off of support, or lower off of resistance that this prospect becomes especially costly.

If a trader places an order to buy after a currency pair has hit support, and if prices continue trending lower; the trader is in a losing position. But if this trader hadn’t placed a stop, the loss on the trade can become especially outsized as the trend continues moving against them.

This can lead to massive losses when one is wrong. And just a few of these massive losses can lead to the downward spiral of The Number One Mistake that Forex Traders Make; which is averaging enormous losses relative to smaller wins, so that even if the trader is, on average, winning 2 out of 3 positions (66.6% success ratio), they can still be losing money.

The thesis of The Number One Mistake that Forex Traders Make is to look for a profit target or reward that is at least as large as the risk amount on the trade. So, if the trader is risking 1% of their account equity on a given trade idea, they should look for at least 1% on the reward side should that trade idea work out properly. Or if the trader is risking $150 on the entry, they should look for at least $150 if they are right.

With a strong system of support or resistance in the trader’s arsenal, risk management can be made very simple by placing a stop on the opposing side of the price level. 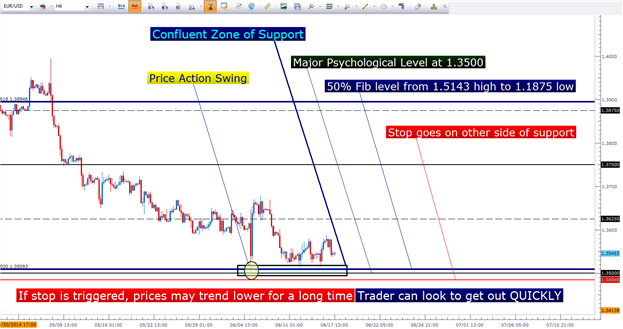 So, if a trader is buying off of support, they can place a stop underneath that support level so that if prices continue trending lower and do not reverse, the trade can exit the position quickly. This enables the trader to avoid those situations in which the near-term trend continues to bleed away their precious equity.

Or, conversely: If a trader is selling at resistance, they can place the stop just above resistance so that should prices continue trending higher (and not reverse), the trader can close out the trade and look for greener pastures elsewhere.

Place the Stop that’s Best Suited for You

This way, if prices don’t react in the manner anticipated by the trader – the position can be closed with a minimum of damage. But is that to mean that if support is a mere 3 pips away that the trader should place a stop 3 pips away upon entry?

Probably not – as just a slight move lower to test support could trigger the loss on the position.

Traders are often best-served by placing the stop on the other sideof support so that the stop isn’t triggered unless the actual support level becomes violated. I call this ‘wiggle room’ but there are a ton of other names for it: Think of it as a cushion that requires support to be legitimately broken before closing out the trade.

But this begs a bigger question, as traders usually have more than just one support or resistance level to use in their analysis, especially if they’re looking at static levels such as pivot points along with Fibonacci and Price Action. That question is which level should be used for stop placement?

There isn’t one ‘right’ answer to this question. Conservative traders usually want to allow the trade more room to ‘work’ and would likely look at wider stops and levels that are further away from current price action; while more aggressive traders will usually opt for tighter stops placed around closer support and resistance levels.

There isn’t one ‘right’ answer because each trade idea is going to work out differently and price action is always unpredictable.

By placing the wider stop and taking a more conservative approach, the trader can look for a larger winning percentage since more ‘wiggle room’ is being given to each entry. These trades simply have more room to oscillate before the position is closed.

As I said, there isn’t one ‘right’ answer because each trade idea will work out differently and there are so many factors to account for that the probabilities of success are simply incalculable with only these few variables given.

Most important is placing stops and managing risk in a manner that is comfortable and conducive for you: Because if you’re a conservative trader/investor and attempting to use aggressive risk management, you’ll likely see adverse results that won’t feel very comfortable while trying to improve your trading plan/strategy/approach.

In our next article, we’ll take this premise of using support and resistance for risk management a step further as we evaluate entry methods and protocols.