The USDCHF has been off the radar for most of 2012. The pair has been quietly consolidating between the January 8th high at .9594 and its current standing low of .8930 formed on February 26th. This movement is in stark contrast with its rapid 2529 pip advance in the last quarter of 2011.As the pair fails to form new highs or lows, traders will look for opportunities to spot breakouts of support / resistance levels to take new trending entries. 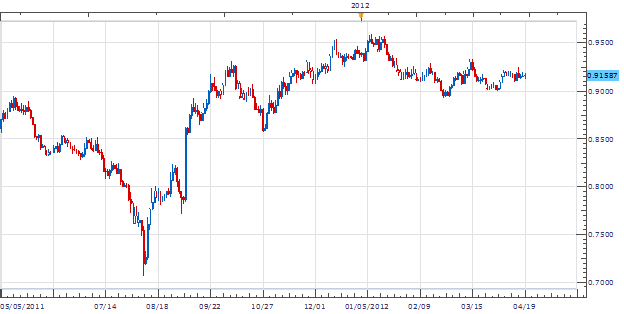 Zooming the graph in to a USDCHF 8Hour graph we can see the creation of a symmetrical triangle pattern. This pattern is very similar to the graph traded on the April 6th edition of Chart Of The Day on the EURGBP pair. As price is reaching resistance, we can set entry orders and look for a fresh breakout to new highs. Currently our last test of resistance was on April 16th at 92.50. We will look for a break above this level when executing our trade.

Limit orders can be found by measuring the size of the triangle patter. First, we need to compare the highest high (.9594) and lowest low (.8930) of our pattern. The difference between these two points is 664 pips and would be the maximum profit potential for a breakout scenerio. Once a limit target is set, we can then use a positive Risk/Reward scenerio of our choosing. It is important to note, that stops should remain under support, which is currently the resistance line of our triangle. 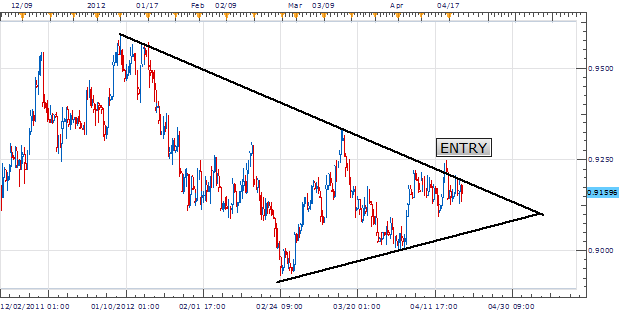 My preference is to buy a breakout of our triangle over resistance. Limits should look for a minimum 600 pips profit, with stops set above new support keeping a 1:2 or better Risk / Reward ratio.

Alternative scenarios include prices remaining in the interior of our triangle prior to breakout.