Bias: Bearish Cable on Trendline Break As DXY Extends Into 2017

While the G10 FX focus has turned to EUR/USD turning towards and likely below parity (1.00), traders should keep an eye on Cable’s potential for further downside. Through most of Q4 2016, Cable traded bullishly against the US Dollar Index (DXY) until mid-December, when GBP/USD broke below its short term Bull channel.

Much of the move lower has been USD-led as the breakdown below Bullish channel occurred when the December FOMC announcement allowed markets to credible see how the Fed may hike 3 per year through 2018. Since the announcement on December 14, 2016, the US Dollar has continued to appreciate as USD/JPY pushed to near 119 and EUR/USD hit new recent cycle lows below 1.04 at 1.0361, and may well continue toward parity if little changes with the interest rate picture across G4 central banks.

In 2017, we will have less speculation regarding what a Brexit will include, and a better understanding of how the BoE will need to act as negotiations get started under PM Theresa May. The talks around the Brexit are expected to begin at the end of Q1 2017 when PM May has pledged to trigger Article 50 of the Lisbon Treaty to get the discussions with EU leaders underway.

The combination of anticipated tough Brexit negotiations and USD pulling away from other major central banks could act as a windfall for this bearish Cable trade. Regarding negotiations, it is expected that EU leaders will look to make an example out of Britain once Article 50 is triggered to discourage the upcoming votes from EU members in 2017 from opting to leave. Additionally, there are multiple signs developing that DXY may be hitting its stride (i.e. could consistently extend) as we’re a mere month away from what is presumed to be a USD Bullish U.S. Presidential administration under Donald Trump. 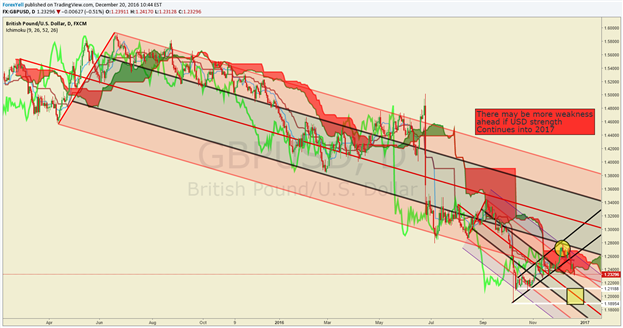 The long-term chart is showing the long-term trend lower in Cable that ticked higher after the Flash-Crash to 1.19 in early October. The two bearish channels have done a fine job of framing price action, which recently hit multiple levels of resistance. The smaller channel is drawn around key pivots post-Brexit.

What is impressive about the recent corrective high at 1.2775 is the confluence of resistance. The three components of resistance were the shorter-term Andrew’s Pitchfork upper parallel, the Daily Ichimoku Cloud, and the channel resistance.

Since trading at 1.27745 during the opening range for December, we’ve traded aggressively lower on the DXY rally and subsequent bond bubble burst on the cyclical rebound in inflation and growth combined with pending policy.

The downside target on the chart above is the 2016 low close of 1.2118 following by the intraday low of 2016 of 1.1905 at the hands of the Flash Crash of early October at the hands of light liquidity and threats of French President Francois Hollande on a hard Brexit and tough negotiations.

While not pictured on the chart above, we’re now breaking below the 50-DMA at 1.2416, which could show we’re about to see acceleration. The view of a bearish breakdown will be in question if we break above the resistance points of 1.2487, the November 25 high, and 1.2509, the December 16 high.

Shorter-term traders can also utilize the support/ resistance map below to gauge how spot is reacting to the Bearish view presented.