The FOMC announcement to raise rates on December 14 was wholly expected, but a steeper than expected Dot plot over the coming years went a long ways in convincing market participants how the Fed is diverging monetary policy from the rest of the world. During the press conference after the rate announcement, Fed Chair Janet Yellen mentioned that she deemed Fiscal Policy as unnecessary given the employment market strength.

While she provided the disclaimer that she wasn’t trying to weigh in on policy recommendations from President-Elect Donald Trump, there appear to be worries that inflation could rise more aggressively than forecast in Fiscal Stimulus follows a historically aggressive monetary policy. Such a move and subsequent inflation readings may indicate a more hawkish Fed, which will increase the cost of borrowing the global reserve currency.

We’ve noted that the US Dollar looks poised for aggressive strengthening when it broke the bull flag consolidation pattern. Since breaking above the channel, the price action of DXY has been distinctively impulsive, which shows a desire to bail on fighting USD strength in the current market. The fundamental factors mentioned above also seem to favor that DXY will have a difficult time seeing a strong sell-off if all else remains in the DXY counterparts. 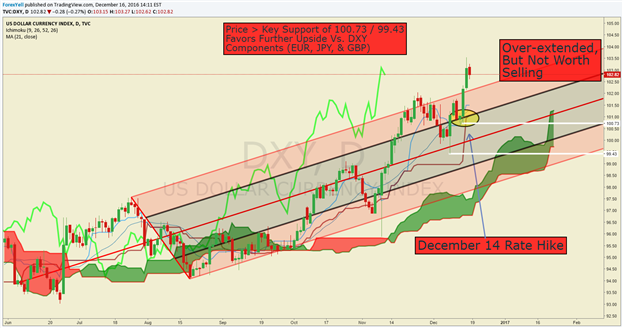 With this week’s price action, DXY has broken to levels not seen since 2003. While some may see this as an opportunity to “sell high,” we would not be comfortable with open short-exposure on DXY even at elevated levels. Looking to the other chart components of DXY, Ichimoku & Price Action Pivots, we’re failing to see credible evidence that a downturn on the DXY could be developing.

Additionally, the candlestick on Wednesday shows a Bullish Key Day with an intraday low of 100.73. Despite the “over-extension,” it’s difficult to build a credible bearish thesis given the strength of USD and the weakness of the DXY counter-parts. The subsequent price action pivot low worth watching is the December low that took place during the ECB at 99.43. A patient trader should wait for a close below 99.43 before looking to trade a turn in DXY.

As long as the price holds above the two levels mentioned above of 100.73 and 99.43, the Ichimoku Cloud will continue to shows two largely Bullish signals in that the price is above the Cloud as well as the 9 & 26-day midpoints and the Momentum Line (bright green lagging line) is above past price.

While these are elementary views of utilizing Ichimoku, they keep our focus higher until price and momentum reverse. Lastly, we have seen a strong break above the Opening Range High for December (101.59), which we would also take as a strong sign that the trend is resuming higher as the technical indicators we’ve analyzed above have favored, and the Bears continue to lighten their positions.

Should a longer-term top be developing, we would look for a break below the Opening Range Low at 99.43.