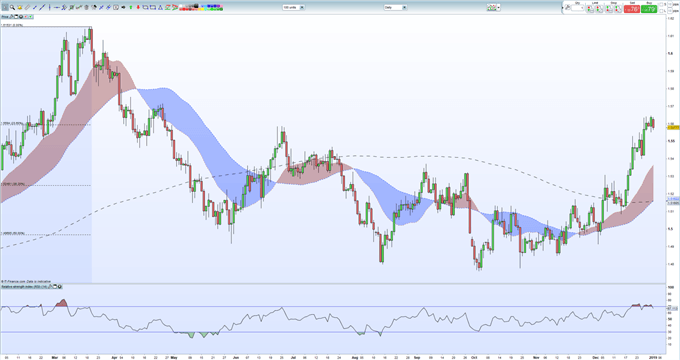 We entered a short EURCAD position yesterday and have exited today with both our target prices met. While the move may have more to go, the speed of the downside move in the last 24 hours will keep us on the sidelines for now.

We look to go short of EURCAD with a tight stop as the pair starts to move out of overbought territory, using the RSI indicator at the bottom of the chart. A lot of the recent uptick in EURCAD has been due to a weak Canadian dollar on the back of plunging oil prices. With this market now stable, and with recent Eurozone data highlighting ongoing economic weakness, the fundamental backdrop suggests a short EURCAD position for a short-term trade. The Bank of Canada also meets next week – all monetary policy settings are expected to remain unchanged – so we look for a short time frame for this trade ahead of the meeting.

On the technical side, as well as being overbought, the pair struggled to break through the 23.6% Fibonacci retracement level with a great deal of conviction and is likely to move lower. We go short at the current spot price around 1.5580 and set our stop loss just above the recent 9-month high at 1.5650. We target the December 26 low at 1.5400 and the 20-day moving average at 1.5365.

IG Client Sentiment Datashows how retail investors are positioned in a range of currencies and asset markets.

What is your view on EURCAD – bullish or bearish?? You can let us know via the form at the end of this piece or you can contact the author at nicholas.cawley@ig.comor via Twitter @nickcawley1.