EURUSD Overdue for a Technical Break

We have opened the new trading year with some unusual FX volatility that is likely a byproduct of the unusual liquidity and seasonality conditions. Not all of the world’s major financial market centers were open for trade on January 3rd as some countries (including many in Asia) observed the New Years day holiday on the Monday. That partial drain of speculative participation likely compounded the typical turbulence that comes at the very open of the year. Year-end conditions typically see large changes in portfolios for rebalancing, accounting and strategy adjustment purposes. Naturally, the Dollar tends to play a big role in this capital movement. And went the current reverses to start the New Year, we can see equally abrupt activity.

Across the Dollar-based majors, we could see the bullish charge behind the Greenback – though there was notably less traction with emerging market currency crosses compared to the developed world majors. This unreliable charge has made some interesting technical adjustments for the likes of the AUDUSD, GBPUSD and USDCAD; but I am most interested in EURUSD. This pair was on the verge of a bullish breakout out at the end of last week/month/year when it crossed above the 50-day simple moving average for the first time in 76 trading days. That said, I was not at all convinced of the move given it was happening in the Bermuda triangle of liquidity. The swift reversal Monday shows what we are really dealing with. Now, this large -0.8 percent drop doesn’t offer any more credibility for intent of trend than the move on December 31st, but this one represents a check back into range. 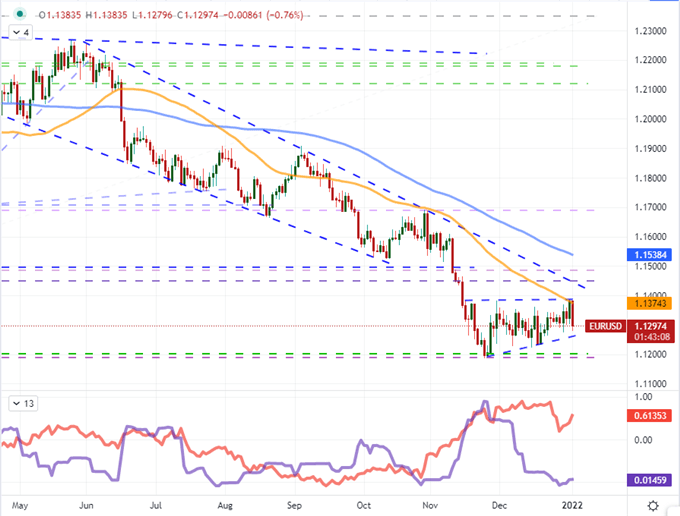 We don’t yet have the market backdrop to determine whether the next committed trend from this benchmark cross is going to bullish or bearish, and range trading is a viable strategy so long as the boundaries hold. The range I will be watching is 1.1400 to the upside and 1.1200 as support and we are presently dead in the center of that span. For potential, I would be more interested in playing the range off resistance given the prevailing trend and given there is an ascending triangle with a floor near 1.1265 – a break of which could override even the strong Fibonacci confluence at 1.1200.

While there is strong range conditions to consider, the eventual – and inevitable given enough time – break from this congestion will interest me far more. The 30-day ATR (average true range as a volatility measure) and same duration historical range percentage suggest breakout pressure is high. Should we hold to the prevailing EURUSD bear trend, a break of 1.1200 will likely find serious hesitation around 1.1000 where trendline support dating back to 2000 lands – not to mention it is a round number. It may not ultimately stop the market, but it will slow its progress. Alternatively, breaking 1.1400 is a move back into a range established over years. The absolute upside is 1.2200; but I prefer to play to milestones along the way at 1.1500 and 1.1700 among other levels. I see this as a hybrid range and breakout strategy benefactor rather than outright in either, and certainly not trend trading. 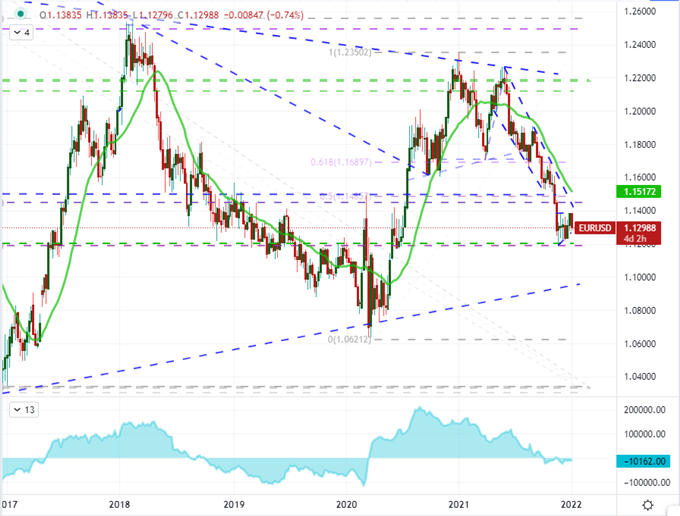