There have been numerous examples in the FX and capital markets as of late where a static-state complacency has pushed already-extended moves to relative extremes. That is both exceptional pressure behind bullish appetites (as with the S&P 500 and Nasdaq) and bearish (gold).

In the FX market, we have seen much the same build up on coasting. The Dollar was a great example of this a few weeks back when the the DXY secured a break of a 12-month long inverse head-and-shoulders pattern. As suggestive as the technical move was, the advance was increasingly divergent from the fundamentals. That disparity led to the snap back that killed a medium-term technical trend and led unexpectedly to a shorter term reversal. There is likely still value to be found in the Greenback's indulgence over the past six months, but it is important to choose a counterpart wisely.

I took a poll to gauge which pair traders found most appealing if the Dollar were to continue its slide, and no surprise that the EURUSD garnered the greatest interest. However, the Euro itself a bullish charge doesn't sit well with me. The currency is up a frankly ludicrous 11 consecutive trading days on an equally-weighted basis, and it has little business to carry that much enthusiasm.

When we consider an exchange rate, we should endeavor to pair the best possible option for the currency in the pair we intend to hold a long position as we do the short that counterbalances it. Following an unexpected thawing of rhetoric from the EU's chief Brexit negotiator on the progress of the divorce, the Sterling jolted higher across the board. And after months of building fear of a crash out 'no deal', there is plenty of relief rally that could be ahead so long as politicians don't torpedo the progress. This makes GBPUSD a particularly appealing candidate to express the Dollar slide as the Pound's lift can amplify or carry the move itself. I took a long position after the break around 1.2990 with a generous stop of approximately 140 points to cover the recent congestion low. 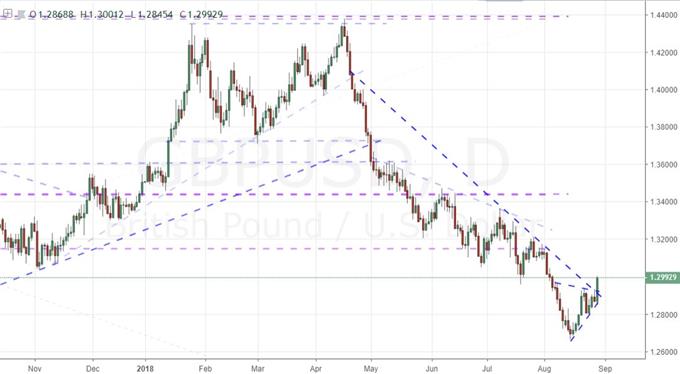 In the Cable, the Pound offers more opportunity on a fundamental and independent technical basis than the Dollar - as the Greenback has already exacted some degree of retracement and the catalysts for its build up and subsequent slide are still under dispute by the the broader market (hence so many conflicting perspectives on why it is doing what it is doing). If the Pound continues its climb, there are many crosses that are appealing, but I am partial to counterparts that can add the greatest contribution. The Swiss Franc is just such a counterpart. This currency is not so much its own impressive driver, but rather presents an counterpart that is often willing to act as a neutral soundboard. WIth that in mind, the technical extension on GBPCHF is particularly exceptional. It is always important not to pick bottoms, but this is a risky call at a turn that I feel is worth the risk/reward. I took a long position on the jump near 1.2650 and placed another accommodative stopat 1.2450 to account for recent volatility. 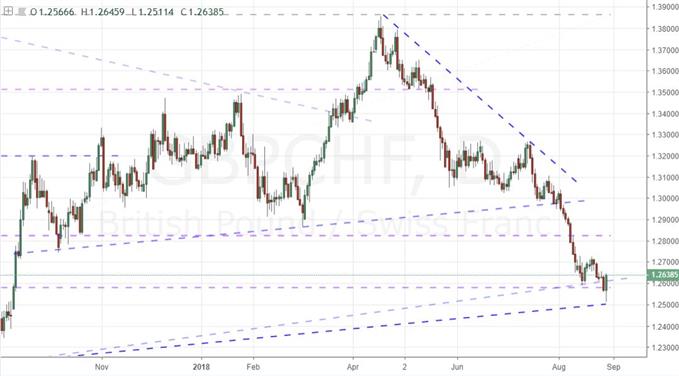 In looking at the Swiss Franc in relief, there is an exceptionally strong one-sided move that seems to break from its safe haven convention. I believe this may signal a speculative stretch that could soon be at risk of correction, with a snap back that can be made more imminent with the return of liquidity and volatility expected with the transition from the Summer Lull starting next week. Choosing counterparts is crucial here - just as with the Dollar - but there could be plenty of options. 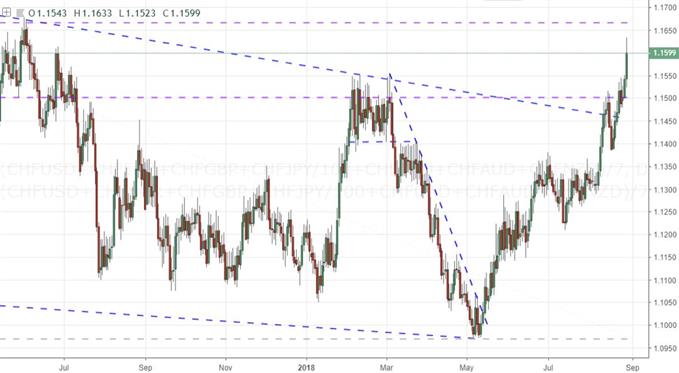 Another currency that deserves attention for its remarkable stretch considering it is running astray of the systemic fundamental theme of 'risk trends' is the Australian Dollar. This currency has earned a substantial portion of its depreciation owing to recent political uncertainties, its position in the trade wars and the RBA's pressure on its status as a carry currency. However, this stretch is likely overdone and could be soon spurred to recovery with the proper spark (there is a lot of the docket next week). So I will keep tabs on this currency for opportunities when the timing (event catalysts) are right. 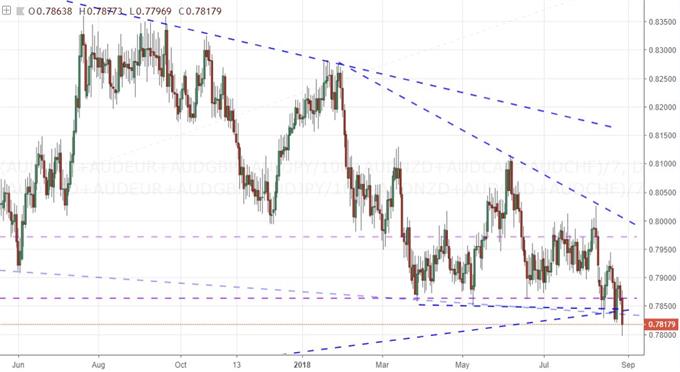 Keep tabs on my daily market analysis via the Trading Videos and through the intrday updates I do on the Real Time News feed. You can find all my content in my Author Page on DailyFX.