The “pro-risk” New Zealand Dollar has been succumbing to selling pressure as of late, particularly against the “anti-risk” Japanese Yen. Fears around the deadly coronavirus emanating from central China have caught investors off guard in thinner trading conditions. Stocks saw a synchronized decline across the world in Asia, Europe and North America. NZD/JPY thus had its worst day (-1.31%) since early August on Monday.

In the immediate sense, a sudden disruption in the world’s second-largest economy as the government restricts regional travel poses as a risk for future revenues. That the Wuhan Virus is also occurring during the Lunar New Year exacerbates this concern. Softer-than-expected Chinese manufacturing PMI could further dent market sentiment on Friday as the data will be reported during the outbreak’s growing momentum.

Down the road, fears around the coronavirus could be contained as governments step up efforts to prevent further outbreaks and a greater insight about mortality rates are known. The risk for sentiment is that a deepening selloff in equities triggers other sector vulnerabilities. These include corporate debt in the United States or uncertainty about future progress in trade talks during a presidential election year.

All eyes are on the Federal Reserve this week even though interest rates are expected to be unchanged. Investors are arguably focused on the central bank’s repo operations which have led to a swelling in its balance sheet. If plans of an unwinding of their liquidity-boosting efforts are expressed in further detail, that may be a trigger to further declines in the S&P 500. That would likely further pressure NZD/JPY lower.

Using a majors-based New Zealand Dollar index to paint a broader technical picture, the currency may be at risk to weakness in the medium-term. This NZD index averages Kiwi Dollar’s performance against the US Dollar, Euro, British Pound and Japanese Yen. It appears to be on the verge of extending a downside breakout through rising support from October – red line on the chart below. 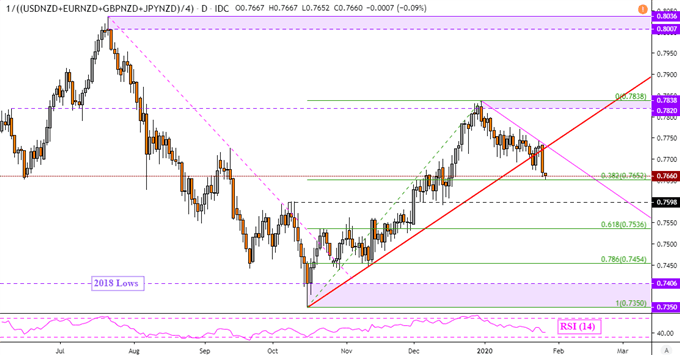 Focusing on NZD/JPY, the pair also broke under key rising support from last year. Prices took out the psychological barrier between 71.73 to 71.99. NZD/JPY’s drop on Monday paused on the January 8th lower wick at 71.24. A daily close under this price opens the door to reversing the key uptrend that took prices from 66.32 to 73.53 during August through December 2019.

From here, bearish continuation places the focus on the 38.2% Fibonacci retracement at 70.78. That level stands in the way towards former resistance which previously held at 69.68 to 70.03 – see chart below. Further declines then expose the November low at 68.88. Overturning the bearish technical warnings likely entails a push higher through 71.99 as prices potentially climb back above the rising trend line. 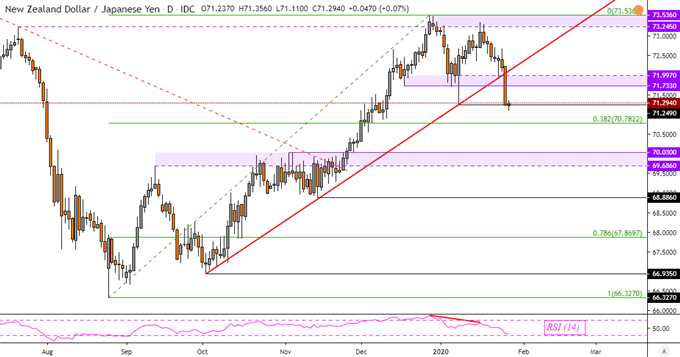