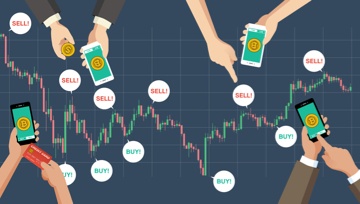 Risk management is at the core of any good trading plan, without having a sound set of principles to follow a trader is doomed to fail. We outline rules and factors to consider when customizing a risk management game-plan right for you.

RISK MANAGEMENT IS PARAMOUNT TO SUCCESS

Risk management is one of the most important aspects to successful trading, but far too often it’s overlooked. Job #1 for a trader is to always keep yourself in the game. A sound strategy and the discipline to follow it will go long way towards ensuring you stick around.

If you are in the learning stage, your objective is to keep losses very small until you figure things out. Adhering to sound risk parameters early-on will go a long way towards building a foundation for later on when there will likely be more at stake.

For the seasoned trader, your goal is to avoid digging unnecessary holes and of course avoiding the risk of ruin.

Maybe you have a workable strategy or better, but perhaps you are inconsistently applying rules related to risk management and this is having a negative impact on your ability to grow.

How much capital you risk on a trade is dependent on your own risk tolerance.

This varies from trader to trader, but it is vital that you trade with a size that doesn't impede your ability to make good decisions. Trading with too much size is often times the culprit for poor discipline.

Recommended by Paul Robinson
Traits of Successful Traders
Get My Guide

TRADING SIZE BASED ON PERCENTAGE AT RISK

It's a good idea to think in relative terms rather than absolute. Think of what percentage of capital you should risk per trade, not how many pips or points or lots sizes you want to trade.

Your trading size will be dynamic when taking this approach. Let’s say you risk 1% per trade, the trade size will be twice as large on a trade with a 50 pip stop versus a trade where the stop is 100 pips away.

If you keep your trading size dynamic in this case your risk will stay the same. Conversely, if you think in terms of fixed lot sizes, then over time the risk will vary and so will your results. If you think in fixed pips/points, your stops may be placed illogically when compared to your analysis.

For example, let’s assume you have an average win/loss ratio of 1:2. If you risk 50 pips on trade #1 and make 100 pips (2x your risk), then you will be ahead by 100 pips. On trade #2 you risk 100 pips and it hits your stop, you will lose 100 pips. This will result in a net of 0 between the two trades if you traded the same number of contracts for each trade.

However, by taking a dynamic approach and adjusting your trading size to fit your percentage per-trade-risk you will have a profitable outcome in the same scenario outlined above. Let's say you risk 1% (50 pips) on trade #1 and make 2% (100 pips), and then risk 1% (100 pips) on trade #2 and lose, you will still come out ahead +1% (50 pips). It’s a simple example, but the principle should be clear.

YOUR 'RISK-PER-TRADE' SHOULD BE IN A RELATIVELY Narrow RANGE

Perhaps you are extremely confident on an idea and want to risk a little more than usual, that is fine as long it doesn’t vary too greatly from your lower confidence trading size.

A HIGH WIN PERCENTAGE SHOULDN’T BE THE PRIMARY GOAL

Your primary goal should be to find trades which give you an edge and offer an asymmetrical risk profile.

Risk/reward should be around 1:2 or better. That is, you should seek to be rewarded twice as much as your risk. Risk one unit to make two units.

Too many traders, though, get hung up on having a high win percentage, which is understandable to a degree – it’s human nature, people don’t like to lose, but that is part of the game. It is better to have a 35% win rate with a 1:4 R/R ratio, than a 65% win rate with a R/R ratio of 1:1. It is easier to identify quality risk/reward opportunities than it is to be right all the time.

When determining how much to risk on a trade you have to consider the fact that you will inevitably have a string of losers, and how long that string will be is often dependent on your trading style. For example, breakout/momentum strategies typically have lower win rates, but high risk/reward ratios. On the other hand, a range or mean reversion strategy will have a higher win rate, but lower risk/reward profiles.

It’s quite possible you could have 10 losers or more in a row, and with that said, losses can pile up quickly. One needs to factor in the total string of losers and how big it could potentially be (this ties into account management which we will discuss soon…)

Trade frequency is an important factor to consider. On one end of the spectrum, if you hold trades for several weeks, you trade with far less frequency and thus can risk more per trade. While on the other end, if you are a day-trader, then your risk-per-trade needs to be much smaller as losses can pile up in a very short period of time.

A ‘hard stop’ is simply a stop-loss which is entered into the trading system, versus a ‘soft stop’ where you have a pre-determined level in mind that you will exit should it get triggered.

Three reasons to use a 'hard' stop. One, you don’t need to be sitting in front of your screen all the time, or while you are away wondering what is going on with your position. Two, there is an element of discipline instilled by having that ‘line-in-the-sand’ drawn ahead of time. Three, you never know when an unforeseen event will happen and you get caught holding the bag.

Risk-per-trade is just one element to a good risk management plan. You also need to protect the overall account by considering a couple of broader factors. These obviously circle back around to per-trade-risk, but from the perspective of looking at the whole.

This is an overlooked factor which can sneak up on a trader quickly if not careful. If you are trading several markets that are highly correlated, trading size per position needs to be adjusted to reflect such.

For example, if you have three long JPY positions, then it is prudent to treat that as one larger position and assume all three trades could hit their respective stops at the same time. The same goes for negatively correlated markets, such as the dollar and gold.

If the two are trading in opposing directions (which often times they are) and you are, say, long the dollar and short gold, then the risk of the two moving favorably or unfavorably together is high. Again, you want to consider the total risk across all positions at any given time.

HAVE A MAXIMUM DRAWDOWN NUMBER IN MIND

When trading isn’t going well, at what point do you temporarily pull the plug? You need to set a limit as to how much is too much.

Drawdowns are an inevitable part of trading and understanding how to handle them is crucial to maintaining your capital. This, like trade size, varies from trader to trader. Is it -10, -15, -20%? The point where you say, “You know what, I need to take a step back before things get out of control.”

The first step when a max drawdown is hit, is to take a step back. Get out of the fire, so to speak. You will immediately feel relief by doing this. It’s only after you’ve gotten yourself away from the screen that you can gain some clarity and see what is going wrong from afar.

Once you’ve identified the problem and put in a fix(s), don’t come back all at once. Ease back into trading with a much smaller trading size, 25-50% of the norm. The objective is not to make all your money back right away, but rather to restore confidence and build some momentum. Once you are starting to feel confident then increase your trading size back to a normal level.

For existing positions, if based on technical analysis, then holding around a major announcement is ok if you are fine with the added risk. Just make sure to have your protective stop in place and adhere to it. If the event is very near and a trade triggers, it is a good idea to hold off on executing until after the event.