After a strong two-day rally in US equities, the largest since 2020, driven by rebalancing flows associated with the end of Q3 and a surprisingly lower than expected JOLTS openings report, today the S&P 500 opened with a gap to the downside but managed to trim losses in the last hour of trading. The fundamentals of the economy show that the U.S. may not currently be in recession, suggesting that the FOMC is not about to pivot just yet, dampening demand for risk assets while bolstering the US dollar and bond rates.

U.S. Treasury yields rose across the curve today. The two-year paper was up 4 basis points to 4.14%, while the 10-year note jumped 13 basis points to 3.75%, after briefly dipping below 3.6% earlier in the week. The US dollar tracked the rise in yields after having suffered its biggest drop in more than two years yesterday, with positive news from the economic calendar pushing these two assets higher.

A better-than-expected ADP private payroll figure and slightly higher-than-anticipated ISM Services PMI had investors pondering whether the Fed will pivot soon. The ISM services PMI is one of the best forward-looking metrics for the U.S. economy, as the services sector accounts for more 60% of GDP. Today’s data does not argue for a slower pace of monetary policy tightening. If anything, it confirms the resiliency of the economy, which is consistent with recent rhetoric from the San Francisco Fed president that suggests that the aggressive tightening cycle will continue.

At the closing bell, the Dow and the S&P 500 lost 0.14% and 0.20%, respectively. While eight of the eleven sectors of the S&P fell, the energy component led some gains. Crude oil prices jumped more than 1.5%, taking WTI futures to $87.89 at the time of writing. OPEC+ members decided to cut production by 2M bpd based on quotas and announced that the next meeting will be in December, around the time the EU price cap on Russian oil comes into effect. The move comes despite the U.S. administration’s efforts to persuade against supply cuts to avoid inflaming inflation. Companies such as Schlumberger, Halliburton and Exxon Mobil advanced.

Focusing on the Nasdaq 100, the tech benchmark also dropped. At the open, the index was sharply lower but was able to erase some of the losses, ending the day down 0.08%. Tesla shares weighed negatively on the Nasdaq after Elon Musk announced he will go ahead with the purchase of Twitter at the original price of $54.20. Earlier this year, Musk sold more than $14 billion worth of Tesla shares to fund the deal before announcing that he would walk away from the buyout. After yesterday’s change of heart, Tesla investors became fearful that the decision will weigh on the stock. TSLA shares fell 3.46%

From a technical perspective, after the S&P 500 hit a fresh year low on Friday, the bulls were able to break above the 3660 level in the last two sessions, but are now finding resistance at 3805-3807, where there is confluence with the 38.2% Fibonacci level. If the bulls are able to maintain control, the next resistance level is located near 3845 as seen in the daily chart. However, if sentiment favors the bears as more economic data is released, the level to watch on the downside is 3723. 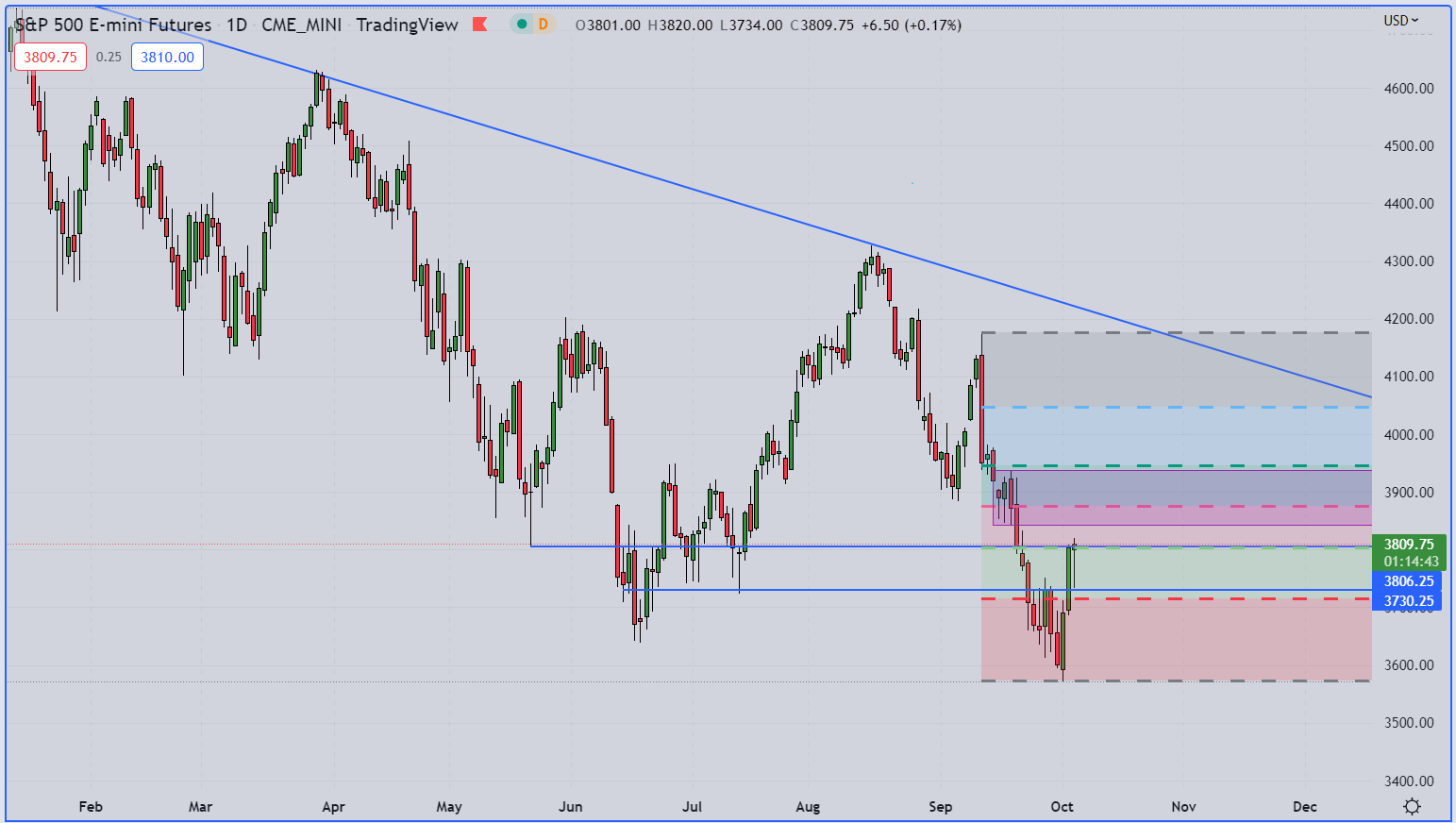 Looking ahead, all eyes are on tomorrow's weekly jobless claims, which will lead into Friday's September NFP figure. For the nonfarm employment number, the market is expecting an increase of 265,000 jobs, down from a gain of 315,000 in August.