Japanese Yen Marches Lower vs. US Dollar, Less So Against Chinese Yuan and Crude Oil

The Japanese Yen continues to weaken against the US Dollar as it approaches technically significant levels amid a lingering threat of intervention by local authorities.

On Wednesday, Japanese Finance Minister Shunichi Suzuki said that they were increasing the frequency of their detailed checks of market moves.

Japan’s Vice Finance Minister for International Affairs Masato Kanda has previously indicated that stealth intervention is an option. The implication is that the Bank of Japan (BoJ) could be directed to sell smaller amounts of USD/JPY to avoid a ‘noisy’ price move.

This would be consistent with Japanese officials consistently messaging that excessive, one-directional and volatile currency moves are not desirable.

Bank of Japan Governor Haruhiko Kuroda has repeatedly maintained that the bank is committed to keeping monetary policy at an ultra-loose setting. This is the opposite of most other central banks, which are tightening aggressively.

The most significant ally of the BoJ in their accommodative stance is the People’s Bank of China (PBOC). China also faces significant growth concerns and are consequently maintaining relatively loose policy.

China is Japan’s largest trading partner, with around 22% of Japan’s imports and exports going between the second and third largest global economies. The Chinese Yuan has been appreciating against the Yen and this will ultimately contribute to Japan’s economic prospects.

The US accounts for 18% of Japan’s exports but only 10% of their imports. Again, a higher USD/JPY will eventually boost the bottom line for the land of the rising sun. Japan runs a trading surplus with the world and a lower currency overall is to their benefit in the long run.

The problem lies in the energy sector with Japan relying on imports to power the nation. Fuel exporting countries represent 16% of imports. This is the part of the economy that Japanese officials are concerned about when examining the exchange rate.

Energy prices have calmed down somewhat since the Russian invasion of Ukraine but remain at elevated levels. A lower Yen would appear palatable to both of Japan’s Ministry of Finance (MoF) and the BoJ, but only if energy importers have enough hedging in place

Looking at WTI crude oil as a proxy for energy pricing, we can see that when it is priced in Yen the price paid is notably lower than where it was in June. A higher USD/JPY may not be as detrimental as initially perceived. 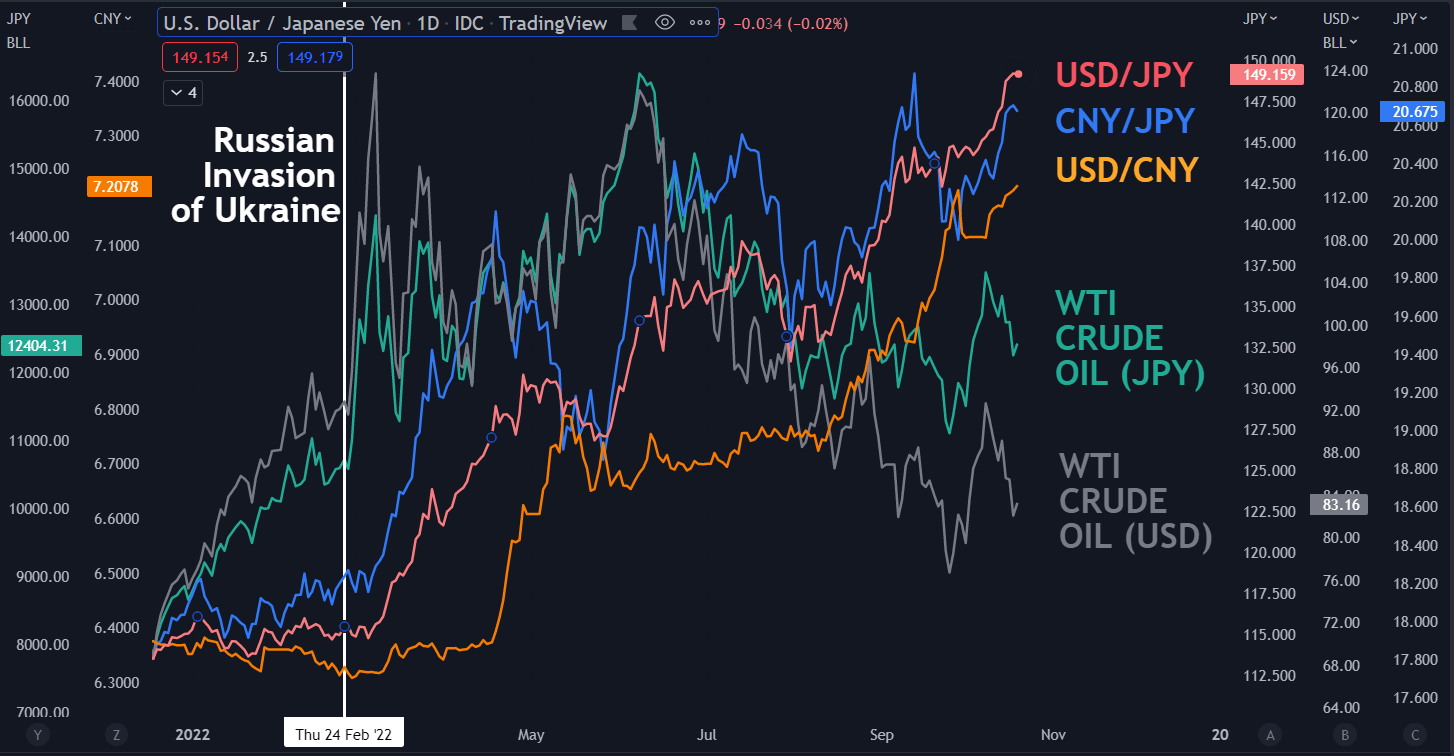