Japanese Yen Gained After BoJ Hinted Intervention, What Could this Mean for USD/JPY?

The Japanese Yen gained 1.08% against the US Dollar on Wednesday, which is a notable achievement given JPY’s persistent depreciation since 2021. What was the cause of this move? Reports crossed the wires that the Bank of Japan conducted a rate check, opening the door to market intervention for the first time since 1998. Traders were spooked. Should they be?

Prior to this event, various Japanese government and monetary policy officials have been offering verbal jabs against the currency for some time. Physical action was absent. At the end of the day, the BoJ remains in a very different position compared to its major peers. The central bank continues to implement ultra-loose policy: interest rates are negative, quantitative easing persists and yield curve control remains.

Meanwhile, virtually every other major central bank has been tightening policy. This rising divergence between them and Japan is what is likely weighing against the Japanese Yen. All you have to do is look at government bond yield spreads to capture the story. Wednesday’s move might have been seen as officials taking the next step to help tame the Yen.

Funny enough, a push for intervention could also be interpreted as a sign that the Bank of Japan might keep policy loose. Former board member Goushi Kataoka mentioned that at the earliest, a BoJ policy shift might come by the middle of next year. It seems that in the interim, the government may have to use other measures to help hold up the Yen.

Historically speaking, the Bank of Japan wasn’t always successful with intervention. From about January 1999 through April 2000, the central bank intervened to sell the Yen at least 18 times (with some help from the Fed and ECB once) to help stop its appreciation. The currency still gained. Granted, that was an example of when the Yen was too strong, but a central bank needs credibility to be effective.

On the daily chart, USD/JPY is eyeing a near-term rising trendline from August. Negative RSI divergence is present, showing that upside momentum is fading. That may open the door to a turn lower. A breakout under this line would expose the 100-day Simple Moving Average (SMA) which could reinstate the dominant upside focus down the road. Otherwise, clearing 144.99 exposes the 1998 high at 147.65. 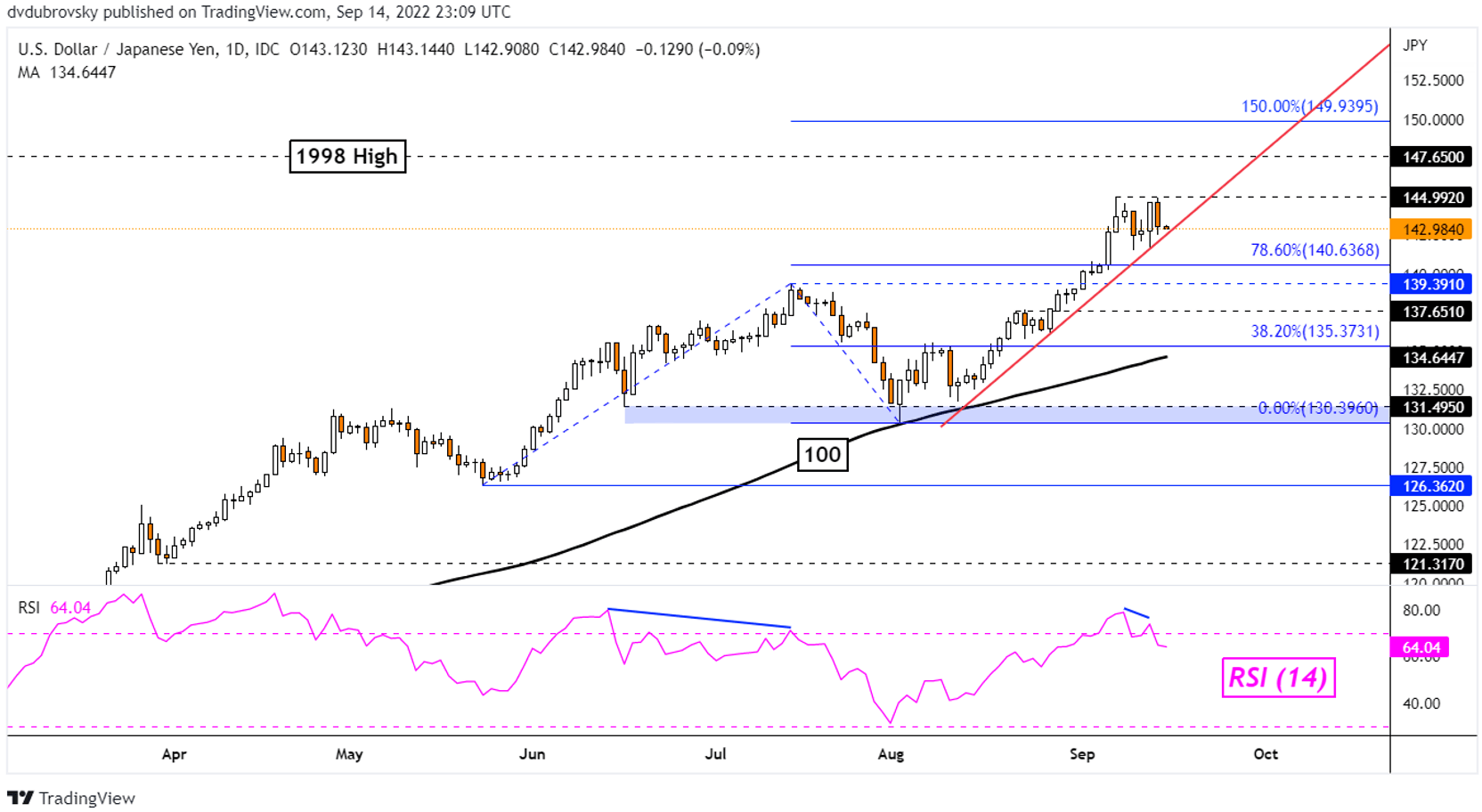