Most Read: USD/CAD Rangebound Ahead of Important Canadian Inflation Data

According to the Conference Board, consumer confidence in December rose to 108.3 from a reading of 101.4 in November, ending the run of back-to-back monthly declines. The Present Situation Index saw a broad improvement increasing to 147.2 from 138.3 last month while the Expectations Index based on consumers’ short-term outlook for income, business, and labour market conditions showed improvement to 82.4 from 76.7. Consumer’s assessment of current business conditions improved with 19.0% of consumers stating business conditions were “good,” up from 17.8%. The labor market also received a favorable view with 47.8% of consumers saying jobs were “plentiful,” up from 45.2%.

The improvement in both the the Present Situation and Expectations Indexes can be attributed to a favorable outlook from consumers regarding the economy and jobs while inflation expectations have hit their lowest levels since September 2021. Consumers were also less pessimistic about the short-term business conditions outlook in December with 20.4% of consumers expecting business conditions to improve, up from 19.8% while 19.5% of consumers expect more jobs to be available, up from 18.5%. 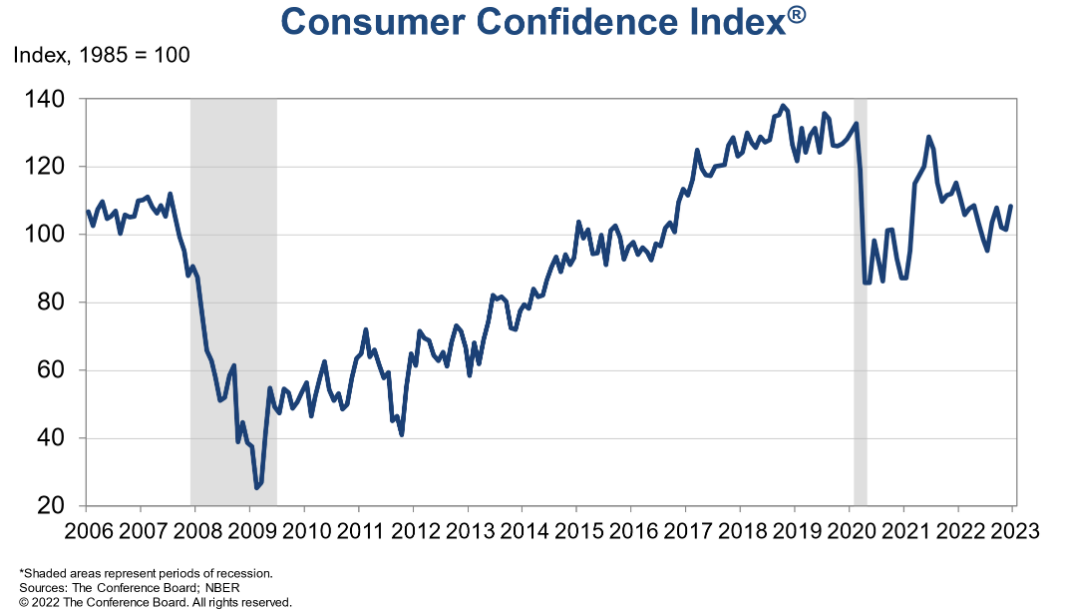 Plans to purchase big-ticket appliances and homes continue to cool in line with yesterday’s housing data. US building permits tumbled 11.2 percent from a month earlier to an annual rate of 1.342 million in November 2022, the lowest level since June 2020. This comes as a result of rising rates affecting both mortgage demand and activity as cost of living remains high.

The US CB Consumer Confidence is a measure of the degree of optimism surrounding the country's economic activity as well as the consumers own financial situation. It serves as a great guide for consumer spending. This report is highly regarded by the US Federal Reserve and serves as a key data component of monetary policy decisions. A higher-than-expected points to greater consumer optimism which should translate into a positive for USD.

Initial reaction was a spike higher before the index continued its decline with the dollar marginally weaker across the board. The Dollar Index (DXY) much like markets has been in somewhat of a range since the start of the week. There is a real possibility we finish the year around current price as the only ‘major’ FX drivers until the New Year is Friday's Core PCE data which could see volatility and whippy price action. However, unless we get a major consensus miss i don't think it will have a major impact on dollar pricing ahead of the new year. This would be in line with the dollars seasonal trend for December as we approach January, a month which has seen the greenback rise in each of the past four years.