The Australian Dollar recovered going into the end of 2022 as the US Dollar peeled back from its astonishing run higher on the back of a Federal Reserve that got tough on fighting inflation. The RBA faces a similar but different conundrum on rates but still has a few things in common with the Fed that could impact AUD/USD.

The underlying fundamental picture of the Australian economy is as robust as it has been in generations. The question remains as to whether this translates into a higher exchange rate.

Both the RBA and the Fed have taken their feet off the outsized rate hikes that were seen through the second and third quarters of 2022. While inflation in both countries remains uncomfortably high, it appears that there is a perception among the banks that they have done enough heavy lifting for now.

The lead-lag effects of monetary policy on the economy are well documented and it might be reasonable for them to see what impact their tightening has had before taking any further drastic actions.

In reality, RBA actions have had very little impact on AUD/USD. US Dollar gyrations have dominated proceedings in FX markets lately, which is not surprising given that it is the volume it trades, and it is the reserve currency of the globe.

With that in mind, the Fed’s decision might be crucial for the direction of the Aussie Dollar. All board members of the Federal Open Market Committee (FOMC) have stated that rates will need to stay high for a period. The market is looking for rate cuts from them in 2023.

Fundamentals Ignored for Now. That Could Change.

The backdrop for the Australian economy is solid overall for now. The unemployment rate remains near multi-generational lows, the trade balance is sweeping literally billions of dollars into the domestic economy each month and nominal GDP remains elevated. Some indicators are showing signs of faltering under higher interest rates such as retail sales and building approvals.

Prior to the Ukraine war, Russia accounted for 0.3% of Australia’s trade despite the autocratic state being the 8th largest economy in the world. This is because Australia and Russia compete in the global economy with many of the same exports. Wheat, gold and copper would head the long list.

International sanctions have curtailed Russian exports, and this has boosted Australia’s trade balance to the tune of AUD 11.4 billion on average each month through 2022 according to the latest data.

The potential of China re-opening in the first quarter could further add to Australia’s bottom line.

The dynamics in AUD/USD have been governed by US Dollar convolutions in previous quarters that are largely weighed by Fed policy and the expanding and narrowing of the interest rate differential.

The local economy may face headwinds with the RBA’s tightening starting to pinch. They will not meet again until the first week of February. The bank will have a more accurate quarterly CPI reading by then and that could play a larger role in their deliberations.

Meanwhile, exporters continue to buy Aussie Dollars at a discount and pump money into the economy. The physical buying of AUD is being outweighed by negative sentiment and perceptions of value for now. 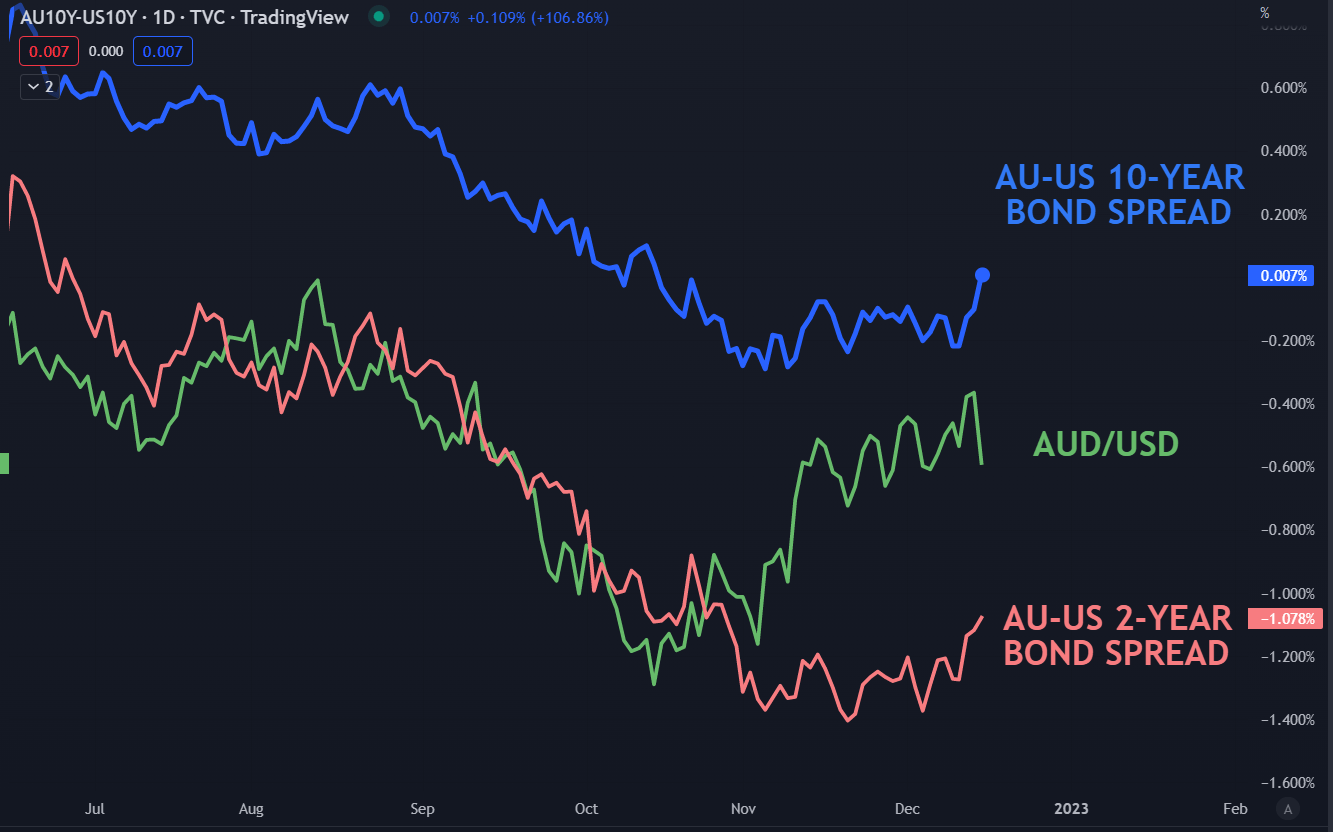