See how retail traders are positioning in AUDUSD, USDCAD and other Dollar-based majors using the DailyFX speculative positioning data on the sentiment page.

I am a believer in technical analysis. It is the technique I began my trading career with and it continues to serve as a quantitative guide in a frequently convoluted backdrop. However, there are certainly practical limitation as to what a chart can reflect about the future. General market conditions in the financial system, disruptive event risk and systemic cross current themes can all render the most impressive technical pattern obsolete with an unforeseen development. That is the cautionary perspective with which I approach AUDUSD.

By all accounts, the technical picture for the Australian Dollar - US Dollar exchange rate is practically pristine. Following a 13-month bear trend which has been shaped by an easy to discover descending trendline resistance that happens to now coincide with the 200-day moving average around 0.7050, there is a two-month consolidation pattern that is taking on the qualities of an inverse head-and-shoulders pattern. That is define by a low, lower low and higher low and point of reversal usually defined through a shorter trendline resistance labeled the 'neckline'. The levels are in and the market is stretched. For many, that is all that is needed to pursue the trade. 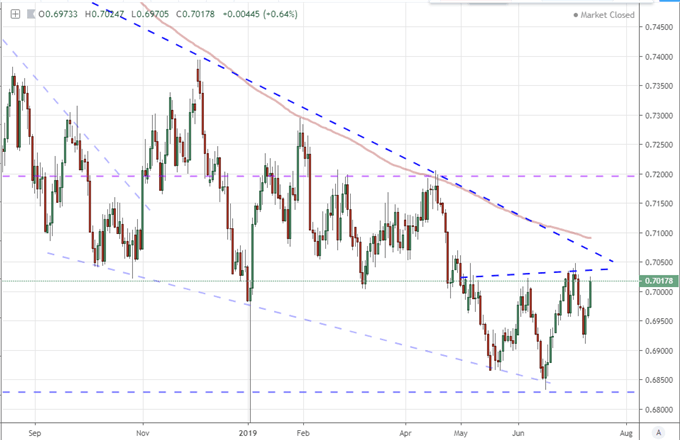 There are serious issues to consider with this possible reversal staging. First and foremost, if you believe that speculative appetites will just take over with the chart-based accelerants in place; I urge you to look across the market for similar patterns of late. You don't have to look very far. USDCAD had developed an inverse head-and-shoulders pattern itself. Yet, when faced with the bullish 1.3150 break to complete the pattern, the pair instead dove and crashed through the pattern's low to unravel the pattern without supplying genuine confidence of a trend extension.

Another prominent and relevant technical picture that misled was the DXY Dollar Index. The Greenback itself had run a 13-month bull trend that established difficulty with follow through in a double top at 98.35. A few bouts of bearish charge, and market moved to pressure the floor of the rising channel which happened to coincide with the 200-day moving average (sounds familiar). After the break below 96.35, the currency almost immediately stalled. It loitered in a controlled range until a bullish wind carried it back into the range that took so much time and pressure to clear. If the benchmark for the world's most liquid currency can't convert congestion to trend, be mindful of setting your expectations for one of its lesser major pairings. 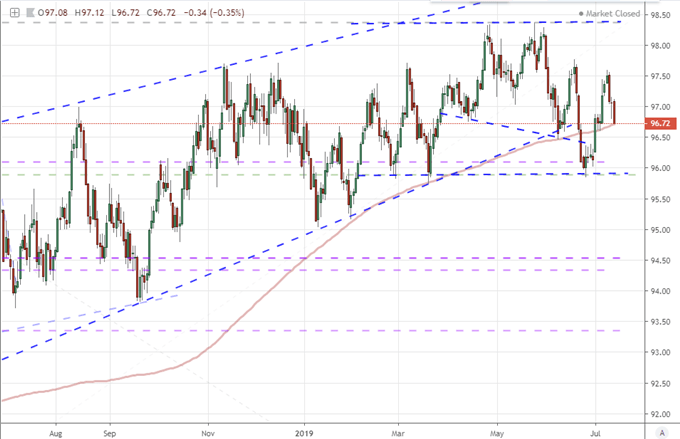 Where Will the Dollar Find its Motivations?

The first problem facing AUDUSD is the limited capitulation of the US Dollar. While the is plenty to work off of over the coming week, it doesn't carry the systemic influence that we would expect is necessary to overcome the inertia that plagues this market in general. This past week, Fed insight proved effective at supplying enough dovish anticipation that the S&P 500 hit a new record high. And yet, the currency struggled to keep pace with the fundamental chatter. It is a problem if the most readily available and promotional fundamental cannot carry its own momentum. Trade war blowback and general economic growth capsizing are also possible contributions to watch out for, but that is not nearly as direct as what we had before. 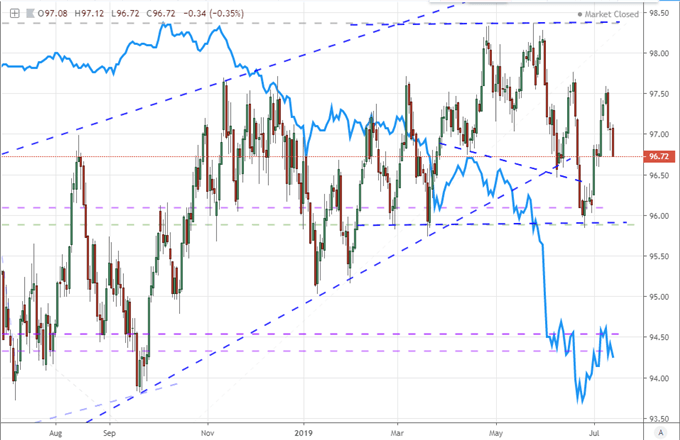 The Leveraged Risk of the Chinese Connection

From the Australian Dollar's side, there are a few pieces of data that stand out on the economic docket. The only truly reliable market-mover (when providing a meaningful surprise) is the employment update. This data has a tendency to deviate from forecast and to send the AUD reeling. Further having, only one major event to prepare for means there is less competition for attention which can curb hesitation owing to traders waiting for the next wave to crash. Far more interesting to me as a spark for the Australian Dollar is the release of the Chinese 2Q GDP on Monday morning. These two countries are intrinsically connected owing to Australia's heavy export reliance on its larger neighbor. Given the shape of the technical pattern, a meaningfully better-than-expected economic performance would be the best bet for a break higher on the pattern, but that is very unlikely. In fact, if there is a beat, it will likely be met with as much skepticism as relief. Consider that if you have serious designs for AUDUSD, which we focus on in this quick take weekend video. 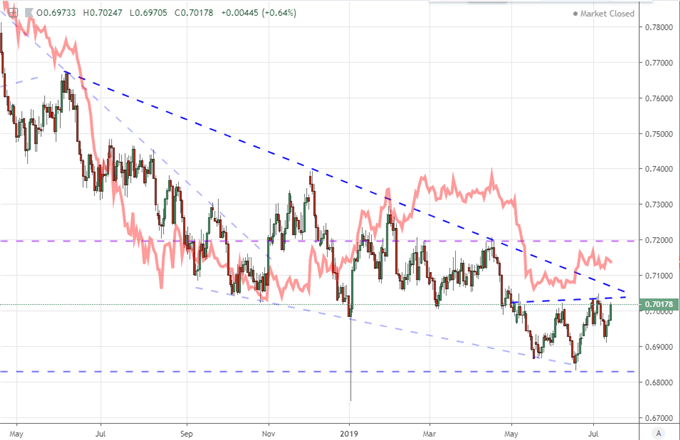