See how retail traders are positioning in AUDUSD, USDCAD, USDCHF and USDJPY along with the other major Dollar-based majors using the DailyFX speculative positioning data on the sentiment page.

In the previous quick take video, we took a closer look at USDCAD - a pair that arguably faces some of the best potential among the major FX pairs to generate volatility despite the constraints in liquidity that we face with holiday conditions. The pair I wanted to look at in this brief review is a somewhat related cross with some similar fundamental inclinations but that enjoys substantial conditional changes that can present more medium-term opportunity should the proper technical and fundamental strings be pulled.

Chart of USDCAD Overlaid with USDAUD in Red (Daily) 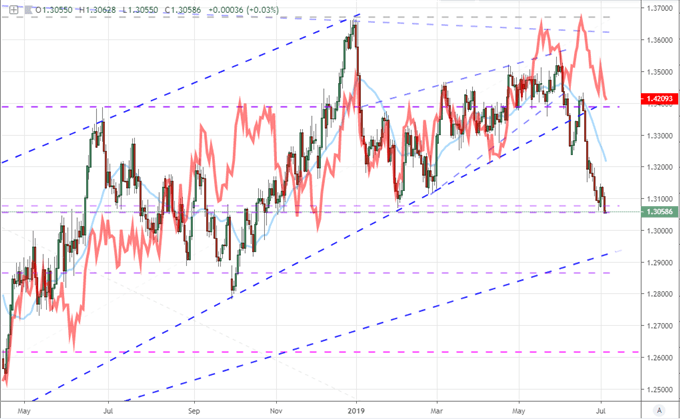 AUDCAD is the kind of secondary cross that few traders keep in their regular rotation when looking for setups in the FX market. That said, there are some significant advantages to the less familiar pairing. When we look to the likes of EURUSD, GBPUSD or USDJPY, there is a notable lack of significant momentum to be found among these most liquid pairings. That is in large part due to the overwhelming influence of messy yet systemic themes. For the Dollar, it is hard to determine whether Fed cuts, economic restraint or trade wars will take a greater roll in directing the benchmark. The ECB's dovish inclinations with a new President coming in and US President Trump's regular complaints about the second largest currency keep the Euro unbalanced. And, the Japanese Yen seems to be a one-tracked mind for reflecting risk trends - though it is on a very different course from other such benchmarks like indices.

For AUDCAD, there are certainly higher-level fundamental issues for which we need to keep track, but many of those themes are deflated for importance or totally offset. For trade wars, Australia is more significantly exposed to China while Canada has a deep correlation to the United States, but they do not suffer the same anchor for sentiment as a USDCNH, USDCAD or AUDUSD. Far more substantial in tipping the scales for AUDCAD is the contrast in monetary policy between the RBA and BOC. Nearly all major central banks are in some phase of dovish, and these two are no exception. The RBA cut rates this week, but the Aussie Dollar was little moved. The BOC is due to weigh on rates next week, but there is almost certainty of no change and relatively little speculation of cuts this year. That can lead to a bias whereby a surprising dovish perspective can leverage a greater (bullish AUDCAD) response than the alternative.

There is a similar skew in potential when it comes to the technical side. The Aussie Dollar has struggled versus most pairs and the Loonie has enjoyed some moderate strength recently. AUDCAD has combined these influences to a tumble to very significant support. We have a range floor that is both a Fibonacci from a more-than decade-long range and the trajectory born out by very explicit reversals from previous years' swing lows. Support is far more influential than resistance. 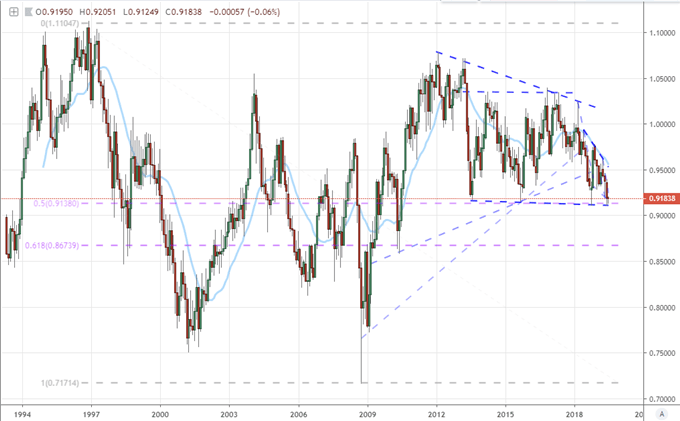 On a shorter time frame, the pair has held to an overt range these past two week of 1.9100 to 1.9200. The swing low from mid-June doesn't do justice to the actual weight to the floor. The cap over this same period is far less substantial. There is a 20-day moving average in immediate proximity and the range of highs through the second half of June offered plenty of opportunity to draw the market's attention. If I were being charitable, we could also consider 1.9200 a 'pivot' whereby previous reference to the level as support can add a little more influence. Ultimately, the break for this pair sets a 'path of least resistance' to a bullish resolution. That offers a technical bias that reinforces the fundamental. It doesn't assure we ultimately realize that bullish break; but if we do, it seems as if it will offer the more meaningful conclusion. 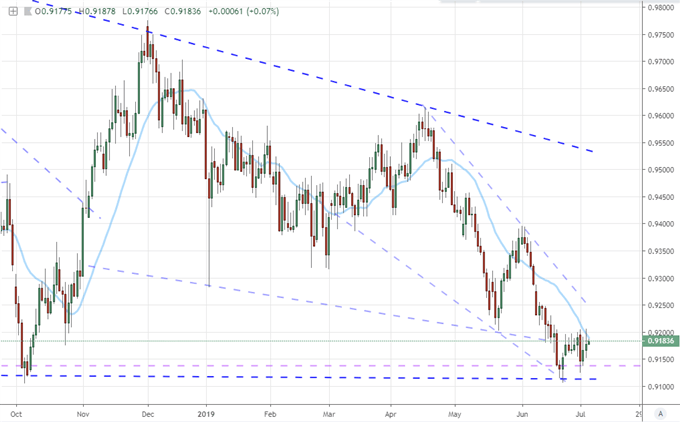