What If Critical Fundamental Threats Evaporated and Markets Still Dropped?

Unresolved Issues Can Stabilize the Market Via Hope

It seems counterintuitive, but the presence of unresolved fundamental threats to the financial system can sometimes help stabilize the market. The greater the breadth, the more stopping power they can tap. Why would the possibility of further escalation of a trade war, say, help suppress a market's sense of panic? When the underlying market's bias has been set to one specific bearing for so long - as it has with a decade-long bull trend - it can be difficult to shake participants to deleverage even if they are looking at imminent risk. When there is a systemic threat hanging over the market and speculative interests have already started to adjust to the more disastrous possible scenarios, there soon starts to arise a question: 'what if the full scope of this crisis never materializes'? What portion of the market's retreat to that point was based on that particular threat triggering a crisis of confidence versus the influence of any number of alternative concerns? It is impossible to quantify exactly what portion is forward speculation and what is 'realized' fundamental weight. That said, since such themes tend to command the bulk of the headlines; traders tend to put greater emphasis on its potential influence and subsequently believe it can be the trigger for a recovery by simply clawing back the losses incurred to that point.

Chart of the USDCNH (Daily) 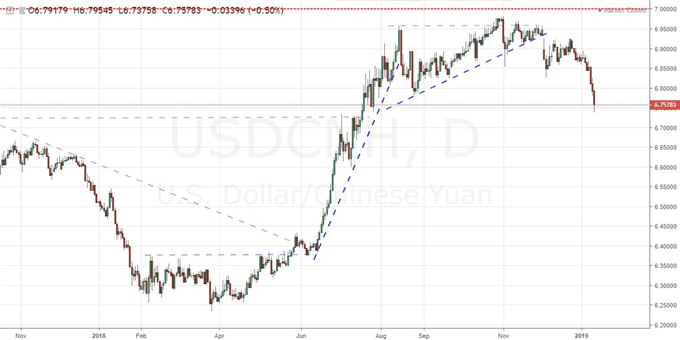 When Reality Sinks In

There are not doubt many traders out there that have thought to themselves recently: if only the Federal Reserve were forced to step on the breaks or the US government shutdown were to end, we could return to record highs. You may even be one of those people. Is it possible that one or multiple of the systemic themes that we keep track of clears and a sudden and pervasive bullish view sets in once again? Yet, that would be the outlier scenario. More likely, alleviating one of the pressure points will leave other more-inflexible issues to fill in the gaps of our attention. End the US government shutdown and a closer look at US GDP will show that it was slowing before this external trouble added additional trouble. See the Fed's monetary policy ambitions come to a complete stop and watch as the market starts to question why. Now, after it becomes clear that the possibility of a targeted fundamental resolution will not jump start speculative appetite, the market is left with the stark recognition that the foundation for a genuine market recovery may never be realized. At that point, with the probabilities leaning more towards a scenario of drawn out stagnation with the acute risk of a spark of panic stalking the perimeter of traders' minds, people will want to withdrawal before someone yells "Fire!" in a crowded market. 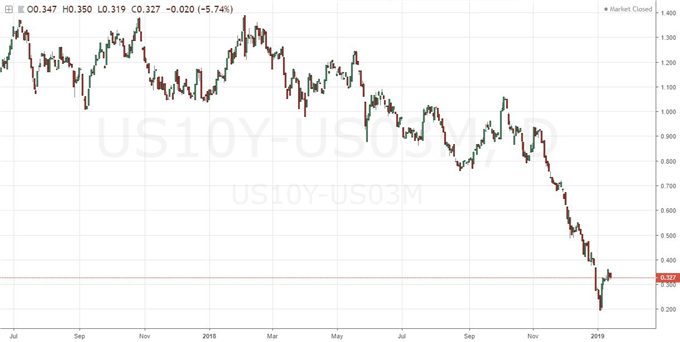 Some of the Most Prevalent, Systemic Risks

We hinted at some of the more high-profile thematic threats that exist for the global markets above. The US trade war is perhaps the most recognizable and wide-reaching fundamental threat. For months the relationship strain between the US and China worsened with projections coming to terms with the notion that they were likely only to deteriorate further. Recently, however, we have seen that barometer shift a little. Rhetoric from Chinese and US officials was starting to take on a more traditional tenor of optimism - even if actual progress wasn't register. Reports that President Trump wanted a deal done to help prop up capital markets is more than believable. It is unlikely to be resolve this week, but a fix may not be too far away. If this saga were to come to a close and markets continued to flounder, it would more distinctly trigger deep concern. In contrast, the US government shutdown is far more recent and targeted to the US. Tying the record for a furlough, the slow erosion of GDP and highlight of political gridlock would weigh sentiment and credit ratings. It is likely that this impasse breaks, but afterwards, the 1Q GDP impact will be registered and sentiment will only be worse off. Finally, there is monetary policy. Fed policy in particular has a dual nature between tightening that leads to dread of a pinched off speculative run while a sudden retreat from hikes triggering fear that a crisis is necessitating an about face. Keep an eye on all of these issues. And remember, if they are resolved and markets don't start climbing afterwards; be ready for concern to arise from the deep. We focus on this in today's Quick Take video. 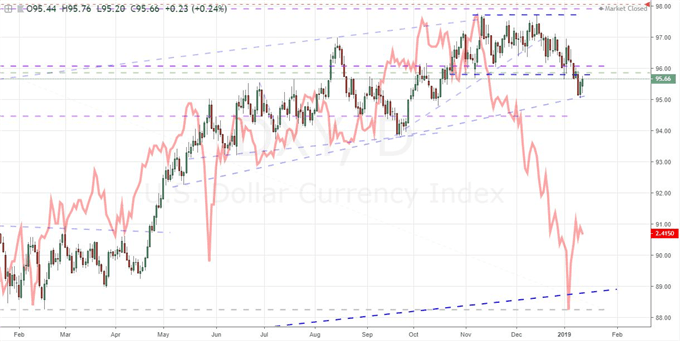