Evaluating the Drive Behind EURUSD’s 1.1300 Crash to Assess Follow Through

Large speculative futures traders continue to shed exposure to a record net long Euro position near the start of the year, but how far will the bloodletting continue? How are the short-term retail FX traders positioning in EURUSD? See retail traders positioning on EURUSD, other FX majors, indices and more on the DailyFX sentiment page.

The Technical Break and an Appetite to Not Ask Questions

In a market full of remarkable moves - both for intensity and technical progress - it was still difficult to miss EURUSD's dive. Perhaps it is the fact that this exchange rate could be argued to be the most liquid asset in the global financial system or that it stands at the crossroads of so many key fundamental themes, but key developments for the FX benchmark remain top concern. It was difficult to miss the technical marker surpassed Monday. The double bottom EURUSD established in two successful rejections in August and at the end of October were themselves relatively weak guidelines. More remarkable was the general state of congestion between the currency market's two top players. Nevertheless, the easy sheering through support at 1.1300 this past session pinged on most FX traders' radars. Now trading at lows not seen since June 2017, a rudimentary reading suggests bears are renewing their push. That said, momentum depends on intent. Technical interests alone will not carry this pair to an easy extension of 2018's stop-and-start retracement of 2017's remarkable advance. Looking below, the 61.8 percent Fibonacci retracement of the 2017 advance is just below 1.1200; but I would ascribe the same level of weight to that floor as I did to the one we just cut through. If there is a bias favoring bears, though, they will seek out any motivation to keep clearing levels below if it remains bearish or levels like this Fib to hold and turn if bullish. Conviction is key.

Speculation and Catalysts that Focus on the Pair

As universal as the EURUSD may be, there are relatively few clear fundamental themes or events that can hit the pairing rather than just one of the individual currencies. That said, there may be one such specialty threat in reports Monday that the Trump administration was circulating a Commerce Department draft suggesting progress on the country's bringing back pressure on Europe via auto tariffs. The two economic powerhouses came to an agreement some months ago not to further pursue taxes against each other so long as they continued to negotiate. However, the US President's discontent with progress on his multi-front global trade war and specific consternation with Europe for circumventing renewed Iran sanctions and levying critiques over his 'America first' initiative may very well lead to his scrapping the deal. If this proves to be true (there is reportedly a meeting with among Trump's trade team Tuesday), then it can very well leverage a 'which country is worst positioned' situation like we have scene through USDCNH. As much potential rests on this particular risk, it is not as currently productive as simple speculative positioning. Net speculative futures positioning measured by the CFCT's Commitment of Traders (COT) report has shown a dramatic retreat in a record net long Euro positon and the deepest net short in overall Dollar exposure to significant swings in the opposite direction over the past six months. Speculative momentum can build upon itself - regardless of the reasoning. Yet, we need to also consider at what point effort balances and value is balanced. That is not particularly clear for EURUSD. 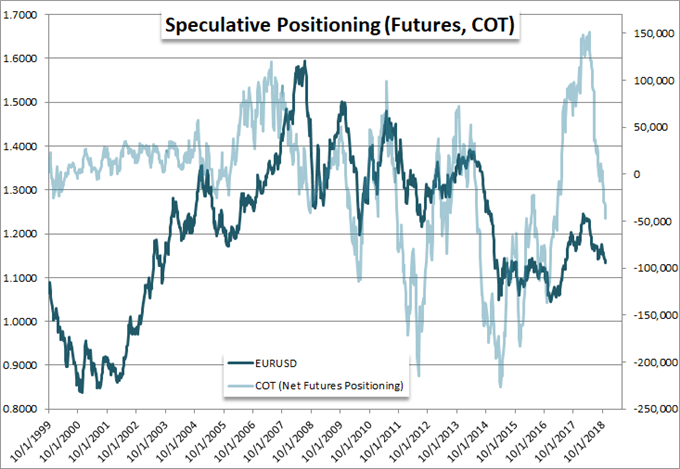 The Individual Pain and Appeal of the Dollar and Euro

If we are going to find the source of motivation for EURUSD to continue to bear wave of otherwise stall, we should look to the individual components for fundamental guidance. Follow through is a question of intent, and there is plenty of opportunity given the perspective of each of these majors. From the Dollar's perspective, there is plenty of stress points but none of them seem particularly pressing. There are no high profile data points or 'regular' events on the United States' docket this week. That said, the Federal Reserve's extraordinary divergence in global monetary policy norms, the Trump administrations pursuit of trade wars and the effort to diversify away from the USD for reserve purposes are all long-term threats to its stability. If the markets chose to pay attention to these issues, it could certainly drive the Greenback to significant losses, but why now? For its own part, there are plenty of systemic issues underlying the Euro including the ECB's own dithering on monetary policy to the point they have painted themselves into a corner but the more pressing concern is one of existential crisis. Italy is due to resubmit a budget proposal today (Tuesday) following the European Community's outright rejection last month. Given the government's position that it will not budge on plans to boost spending, this is not looking to be a very promising step towards negotiations. Where an equally-weighted Dollar Index did advance, it wasn't nearly as impressive in its progress as the EURUSD-leveraged DXY. A similarly distributed Euro picture though offers the biggest drop in three months to a five month low. We consider what could be driving the Dollar and Euro moving forward in order to assess the momentum EURUSD may find in today's Quick Take Video.

Chart of an Equally-Weighted Dollar Index 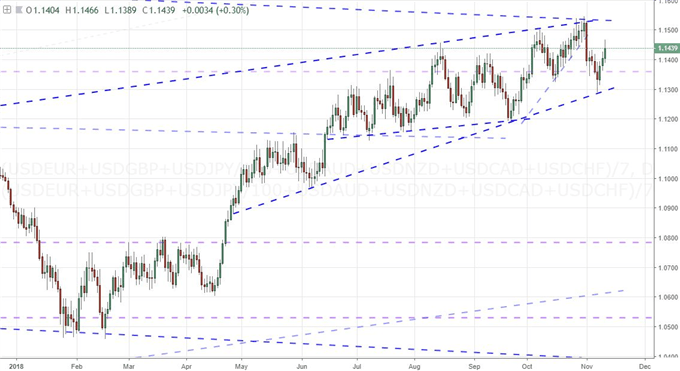 Chart of an Equally-Weighted Euro Index 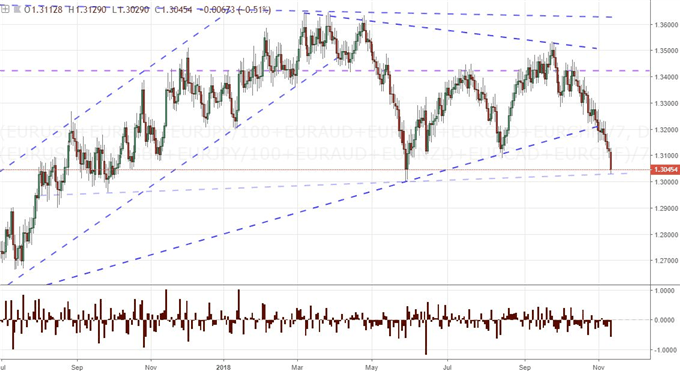