Preparation for Trading and Investing Around Next Week’s Election Fireworks

See my views on the more systemic risks and the shorter list of opportunities the Dollar faces in the fourth quarter forecast that I wrote with Strategist James Stanley. Find the outlook for the benchmark and many other currencies, indices and commodity on our Trading Guides page.

Keep Politics Out of It...

It seems counter-intuitive, but when you are evaluating the influence that politics can have on the market, it is important to keep 'politics' out of the equation. By that, I mean that we need to keep our personal bias on candidates and social policy out of the assessment. Prevailing market prices are the culmination of positioning for speculative and practical needs. Views on candidates, parties or policies are based on personal beliefs and thereby deviate wildly from person to person. That is the antithesis of the collective view that culminates in a prevailing market price. For most, successful trading involves removing emotion from the equation as thoroughly as possible. Politics are in many ways the personification of those emotions. If we can strip away more of the irrational and personal elements of this tumultuous market theme, what we are left with is a charge of volatility and perhaps even the contribution of a more systemic trend. 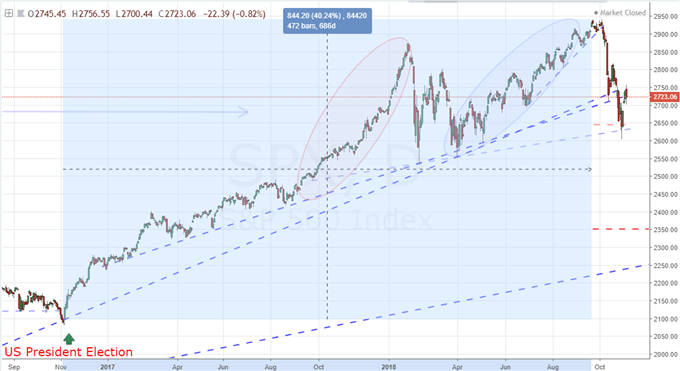 The Real Risk from This Election is Uncertainty

Not all elections represent the same threat and potential. The upcoming mid-term elections for the United States (Tuesday, November 6th) carry substantial risk. This is in part due to the backdrop of politics in the United States these past two years. In November 2016, Republican candidate Donald Trump unexpectedly won the presidential election and ushered in a policy that centered on incredible change in the established norms. The markets do not like uncertainty, but they certainly enjoy policy commitments that support economic growth and speculative reach. The Trump administration's vows of tax cuts, infrastructure spending and regulatory rollback were received favorably by the speculative ranks through the next 15 months. Yet, at a certain point, the promises started to clash with reality. The vows of growth were not bearing short-term fruit, but the pursuit of global trade wars did lead to economic and capital market disruption while tax cuts raised the forecasted trajectory of national debt. The conditions that have evolved over time are tenuous with propensity for volatility and draw regular attention to the market's excessive enthusiasm.

Anticipation from the Dollar and Risk Assets are Set Too Low

Regardless of the ultimate outcome for this week's highly-anticipated election, there is no scenario where all risk fades to the background and in turn supports a straight-line recovery in risk assets. Uncertainty is the unofficial definition of risk in the financial markets, and the myriad of possible outcomes from the election will result in some degree of ambiguity over the future. The 'best case' outcome from this event for reducing uncertainty would be a Republican-led outcome for both houses of congress to align with President Trump's agendas. Again, that is not to say these are better candidates, a better party or better policies; but it would be easier to push forward an agenda under those circumstances. Nevertheless, Donald Trump's proclivities to announce sudden and dramatic policy changes that can affect growth and international trade do not make this a safe outcome. According to polls, the higher probability is for a mixed Congress to pose a roadblock to the President's more unpredictable policy calls. Should the Democrats when both houses, the situation would be even more troublesome with the Legislative branch proving a constant stymie to the President's volatility. Regardless of the ultimate outcome, the impact on the Dollar and risk assets (like the S&P 500) can be substantial. And, such risks are heavily undervalued in the Dollar's and S&P 500's prevailing prices. Such anticipation leading into an abstract event is obvious, which amplifies volatility but sidetracks market run. Further, given the change in bias that is developing following years of escalating risk exposure, this could pose another source of instability for complacency-led speculative build up. We discuss the importance and potential market impact of the upcoming US election in this weekend Quick Take video. 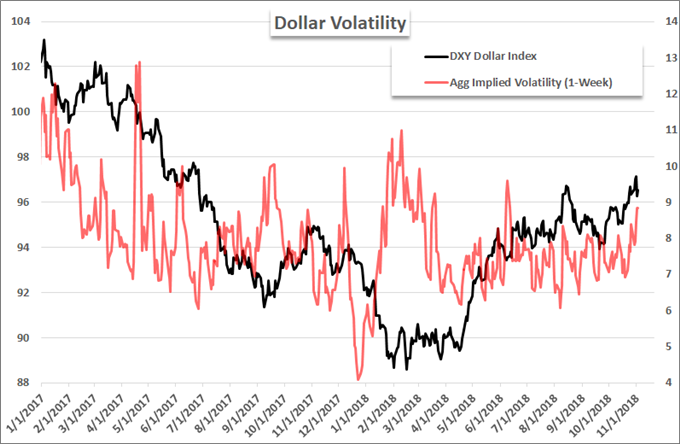