See my views on the more systemic risks and the shorter list of opportunities the Dollar faces in the fourth quarter forecast that I wrote with Strategist James Stanley. Find the outlook for the benchmark and many other currencies, indices and commodity on our Trading Guides page.

Know What is Driving the Market to Determine if It Continues

There is little denying the remarkable move from the US Dollar this past session. From the most popular, trade-weighted DXY Index, the biggest drop in four months was an inconvenient turn following a tentative technical bullish breakout. This was essentially the reflection of the EURUSD which provocatively lost traction at August's swing low of 1.1300. Does a technical alignment offer any greater conviction to its next move? Or perhaps the defining feature is intensity. If that is the case, an equally-weighted Dollar index saw the largest single-day tumble since March 14, 2017 - and its technical backdrop wasn't too shabby either. A significant move can be sign of a more systemic move in the making or it can simply reflect a brief spat of volatility that fades as quickly as it appeared. What matters in truly estimating the intent for run is the motivation for the move. Response to a scheduled data release or unexpected news update represents a limited duration charge that would carry trend so long as it taps a much more systemic theme. Yet, if the Greenback's slide draws power directly from one of its deeper wells from the start, the capacity of a bearish reversal can prove far more reliable.

The Systemic Themes at the Root of the Dollar's Bearings

So, if we are looking for the long rudders on the world's most liquid currencies, what is it we should keep tabs on? One of the most productive tail winds the Greenback has drawn on over the past years is the unique appeal of the United States' monetary policy pace. The Federal Reserve is still committing to a tempo of rate hikes (a fourth in December and three in 2019) that no other major central bank can come close to matching. That bearing has eased off over the past few months but it hasn't deflated significantly and certainly not just recently. Perhaps that signal for a shifting backdrop is soon to come. Of course, the Dollar's carry trade status is only one part of the equation. There is also the general appeal of pursuing a carry trade. In a strong tide of risk appetite, the market will seek out any sliver of yield it can possibly find. The Dollar will provide in that scenario with a benchmark range of 2.00 to 2.25 percent. Then again, a sudden rise in fear can throw off the equilibrium established between the market value afforded the currencies and assets relative to the actual return they provide. The concept of risk poses an interesting dichotomy for the currency. While it is an unmatched safe haven in extreme financial fear, it is also a benefactor of robust conditions whereby its yield promotes an advantage. Yet, if speculative trends are too strong, other central banks will start to close the gap the Dollar enjoys (and much of this is speculative anticipation rather than actual yield). And, anywhere in between, the extremes will diminish the currency's inherent advantage. 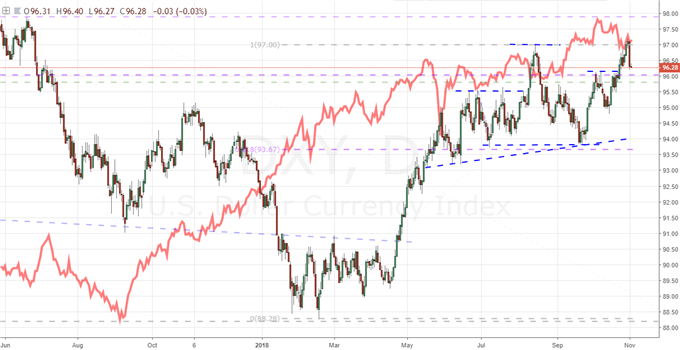 Benefit and Detriment of Being the Most Liquid Currency

If we consider the moderate rebound in risk trends over the past three trading sessions and an improvement (albeit small) in the perception of trade wars, perhaps there was something more meaningful to work with for bears. High level trends can certainly arise from sentiment and monetary policy, but changing those trends is a tall hill to climb. Besides, there may be a more prominent influence at work against the Dollar: its role as a benchmark. The US currency is the world's most liquid asset by far. This can work in its favor as it absorbs safe haven flows and investment assets more readily. Yet, it can also prove a burden under the wrong conditions as well. If the USD is stagnant on its own fundamental merits and its largest counterparts mount rallies, the Greenback can in turn lose ground. That is what happened this past session. The Euro and Yen are the second and third most liquid currencies respectively, but they were choppy and weak respectively. That said, the subsequent two counterparts - Pound and Australian Dollar - posted impressive rallies. The Sterling was catalyzed by a hawkish Bank of England (BOE) rate outlook while the Aussie Dollar found help from local data and speculative appetite. Can this indirect run continue? These events are not well established for trend. Then again, the Euro and Yen could easily swoop in with their own participation. What is driving the Dollar and how should we measure its performance? We discuss that in today's Quick Take Video. 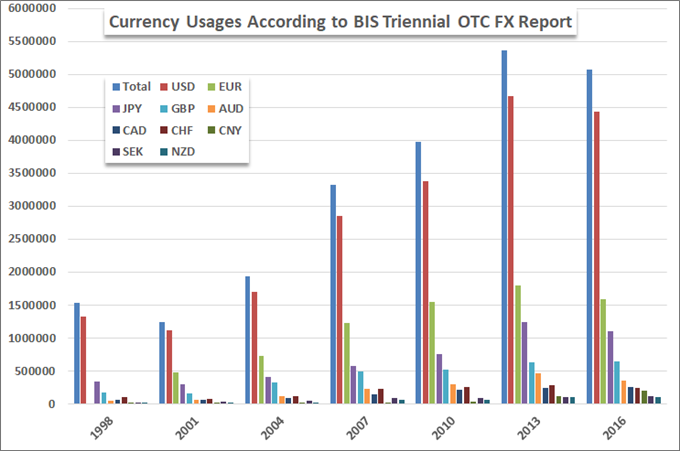