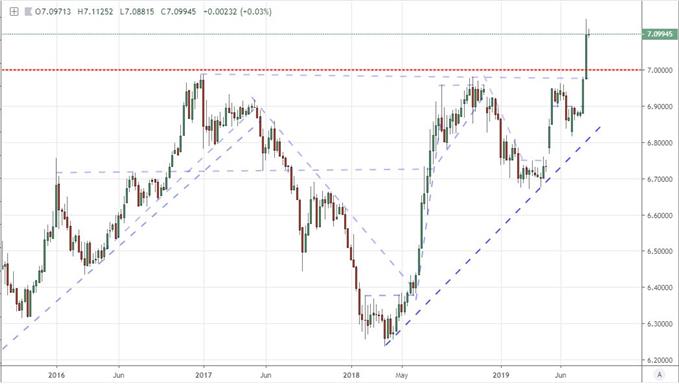 Fundamental Trading Forecast - Would Trump Act to Devalue the Dollar in Trade Wars?

If we are looking for any hidden threats to global market stability as this week progresses, the first place to keep tabs remains the situation with trade wars. Following the previous week's salvo of escalation between the United States and China - the former's President announcing another $300 billion in Chinese goods facing a 10 percent tariff starting September 1st and the later allowing the USDCNH to surpass the closely watched 7.0000-mark - we haven't seen any further 'major' moves by the participants to drive the economic fight forward. That said, the probability of escalation is seen as troublingly high given the progress over previous months and accelerated frequency of such events. We can see the concern lingering in measures of implied market volatility as well as the preserved tension of the Dollar-Yuan exchange rate.

It is difficult and ultimately impractical to attempt to preempt escalation on the trade wars front even if the likelihood of it happening eventually is high. However, we can look to certainly measures that account for the pressure that is building in economic terms. The IMF's warning late last week that China's economy is at risk from the sustained weight brought by US tariffs will register against the run of July statistics that we expect out of China this week. Already, financing and lending figures released Monday morning offered troubling updates, and the market is reasonably sensitive to subsequent updates that register problems. Naturally, this is not simply a US and China detriment, there are other countries that are engaged in phases of their own protectionism, but there is also collateral damage to be felt by the unrelenting economic war between the largest players. 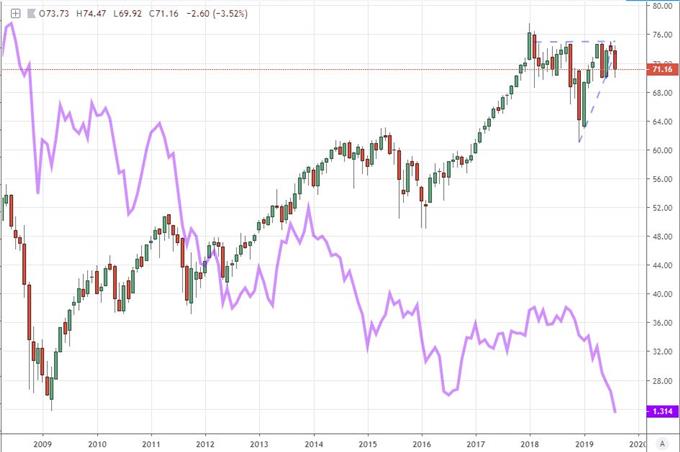 Amid this economic toll, it is worth weighing on the strategy options by the Trump administration. The President is pursuing an aggressive policy designed to exert maximum pressure on China in a bid to change decades-long policy that it deems unfair. However, with the recent allowance for the Yuan to continue its path of depreciation 'as would be expected in fundamental terms', the transmission of effective trade war policy by the US starts to flag. That puts the White House in a difficult position. How does it account for an automatic adjustment to its primary tool? It seems Trump believes one solution is to see the Dollar weaken to neutralize the Yuan, Euro and other currencies' benefit. Hence the pressure brought on the Fed. That said, the central bank is not yielding to the calls from the White House as the group attempts to safe guard its credibility and the stability of the financial system. If the Fed won't answer the President's calls, what can he do to afford the impact he is looking for? Perhaps raise the market's concerns, forcing investors to demand relief from the central bank? It is a dangerous strategy with lots of unintended collateral damage, but one for which this administration may be willing to pursue. We discuss this week's top fundamental themes and events in this week's webinar.