The Dollar picture has continued to be a sore spot for traders as directional bets are easy to fail, quick to reverse. USDCAD is showing lots of weakness and approaching an important long-term form of support. GBPUSD is also at a big long-term trend-line, which makes how it reacts here a key development to watch. EURJPY, like the USD pairs we are looking at today, is trading around an important area of support.

USDCAD weak, about to test trend-line from 2012

USDCAD is currently displaying weak price action as it approaches the 2012 trend-line. It will be an important test, as the current decline on the weekly looks similar to the one that unfolded during 2017. Watch how price action plays out at the trend-line, a hold will keep it afloat while a drop below the long-term threshold will further the notion that we are seeing a redux of the 2017 breakdown from a grinding upward, corrective channel.

Cable is trading around the trend-line rising up from the October 2016 flash-crash low. It breached it on a daily basis, but given the long-term nature of it we need to give it a little room. The trading bias isn’t very strong, but for those trading it from either side it is a big line-in-the-sand to be mindful of. I also discussed a few of the other GBP-pairs at major cross-roads (see video).

EURJPY is firmly testing the trend-line rising up since 2012. Multiple tests are taking shape and so far, it is holding, but not with a whole lot of conviction. A breakdown could have the January flash-crash low just 119 in play, while a hold keeps EURJPY moving sideways for now. 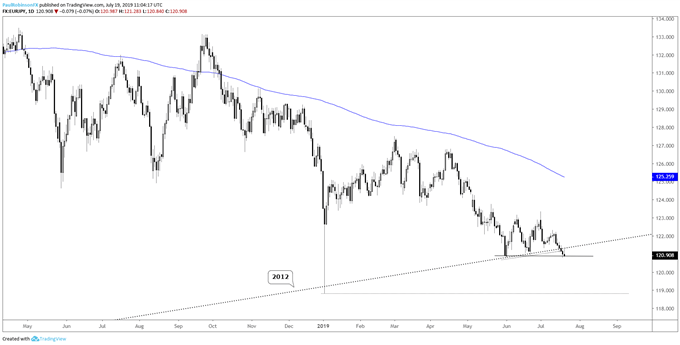