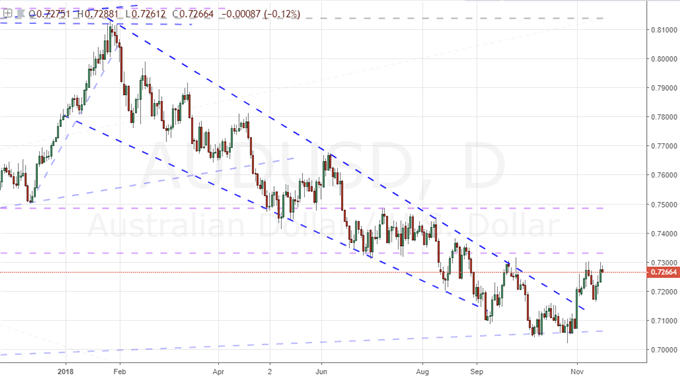 A Review and Outlook of an Australian and Kiwi Dollar Run

A familiar appetite for retail traders to pick reversals is showing through in AUDUSD and NZDUSD exposure. See retail traders positioning on both majors, key Aussie and Kiwi crosses, other FX majors, indices, commodities and moreonthe DailyFX sentiment page.

When I close out a trade, I will always do a personal review of the position to see if there was anything that that can be gleaned to improve upon for future selection and strategy. It is a valuable practice whether the position closed with ak profit or a loss. Most would think there is more to learn from the latter; but learning what is best to draw from in the former and perhaps where luck played more of a role than strategy can be just as valuable. This past week, my long AUDUSD position was cut with a very modest profit taken out on a trailed stop. Looking back, the technical picture was very appealing - and still is today. Fundamental conditions were less of an interference than an outright source of strength. The carry trade appeal of the Aussie Dollar had thoroughly deflated and its sensitivity to risk trends had notably evaporated. As October ravaged US equity indices and other risk assets, the Aussie Dollar was steady and even gained ground. A more reliable buoy for bullish interest was found in speculative positioning (part of what I consider 'market conditions' as a third analysis perspective) which found net speculative futures positioning near its lowest levels plunged in recent years. All told, the scene may have not been perfect, but it was a robust backdrop for a bullish attempt. So, where did my effort falter? Market conditions certainly proved an impediment as risk trends would test the limits of a sidelined carry currency, but the ultimate knock out of the position would come due to my trailed stop. I moved the stop on my position up to a point just past breakeven when the market moved to put it in the money to the tune of approximately 100 pips. Normally, I set the first target on trades equally to the initial risk and then trail up stop on the remainder of the position after booking a portion (half or a quarter typically). That was not the case with this AUDUSD. This was part deviation from an established plan and part impatience.

It is always useful to review a decision to take a trade, but it can be just as fruitful in our efforts to navigate the markets to reevaluate our conclusions not to take a position - particularly when some core elements of a strategy are met. An evaluation of my decision to remain grounded despite my interest in the New Zealand Dollar is reasonable. Many of the points of appeal for the Aussie are similar for the Kiwi Dollar: its carry position was already routed, risk trends were showing less and less sway over its performance and speculative positioning via futures markets stood at an even greater extreme than the one seen through the Australian currency. Net futures exposure hit a record net short that doubled the previous extreme, but that over-reach was starting to ease back. Many of the virtues that drew me to AUD, were present for the Kiwi. The New Zealand unit was perhaps more appealing for its deeper slide and the more aggressive position imbalance via futures. That said, I chose not to double up on a correlated position. How strong is the connection between these two currencies and did I chose the better of the options? That is up for debate, but I could have adjusted for risk such that both could have been pursued without having caused an excessive burden. Looking back, I should have taken a long position on the Kiwi as well according to my criteria and general market assessment. 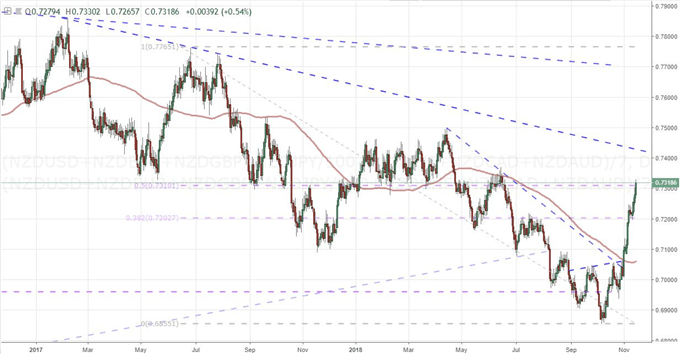 So, What About the Future?

An after action assessment can help isolate lessons that we can implement through our future trading, but it can also serve to re-evaluate a market that met certain criteria and may still qualify as an appealing opportunity. For my long AUDUSD position, the technical picture is still very attractive with 2018's bear trend channel break to start this month still in its infancy. The former resistance of this pattern still holds current support and there is an enormous discount that the market could cover is so motivated. Between the two 'commodity' currencies, the Kiwi has taken advantage the most of the shifting sands of underlying conditions. There is less of a severe discounted behind the currency which could have done more than its fair share to carry the weight behind a continued reversal. Fundamentally, it could continue to defy any risk aversion that arises, but my confidence in its ability to keep up the fight is materially lower, and the onset of holiday liquidity drain heading into next week makes for a distorting aspect to chasing such a trade. For AUDUSD, a re-entry was an option I considered before and it was initially stopped out. Here, the monetary policy position and risk sensitivity are more controlled. If risk trends were to firm and hold, the RBA merely insinuate a hike on the foreseeable future or a mad scramble to reverse, long-term and one-sided moves, the Aussie Dollar would qualify. However, it is specifically the issue with tempo that keeps me out. What are your criteria and cutoff for trade prospects? We look at the Australian and New Zealand in today's Quick Take video.