What is the Trump Administration's Strategy in its China Trade War?

Have questions about global macro themes like trade wars, the US Dollar and Chinese Yuan or anything else trade related? Bring them to the weekly Trading Q&A I host every Tuesday and get an answer. Sign up on the DailyFX Webinar Calendar

There is a line in the movie The Dark Knight where the protagonist's (Batman's) long-time advisor (Alfred) recounts a tale where the pursuit of a rational explanation to a villain’s inexplicable actions seem to escape the logical pursuits of man's typical desires. He warns "some men just want to watch the world burn.” It seems many in the global markets would apply this same anarchic approach to US President Donald Trump and his pursuit of trade wars. There is no doubt that his administration is committed to stirring the diplomatic norms, but assuming there is no strategy at all beyond stoking chaos would be disingenuous while also leaving us ill-prepared for the type of markets we are actually dealing with. If we consider the threats, actions and general focus of the US government in its now-months-long application of trade wars; a reasonable strategy starts to form. And, if we can appreciate what the President's objectives are; we are better prepared to adapt to one of the market's most pervasive and unpredictable drivers. 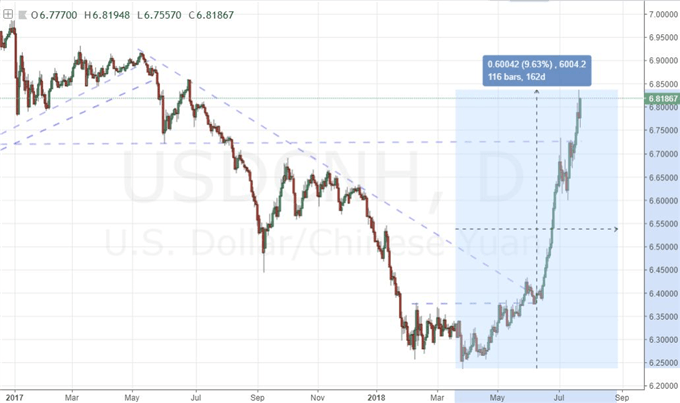 While there is absolutely an aim to the United States' pressure in trade wars, we shouldn't assume the opposite extreme: that there is an exceptionally convoluted objective to the country's efforts. The most likely reason behind the Trump administration's rapidly escalating program to penalize its largest economic counterpart is rather straight forward: to disrupt the unprecedented rise of a competitive global super power and now its stabilization at its lofty positon. The view of a peer with the same reach and heft as the US itself is an obvious threat to the country as it tries to direct the spread of an economic ideology that has helped sustain its rise to astounding influence. This view and its urgency make more sense when we consider some of the President's key advisers: Larry Kudlow and John Bolton, both with their own ax to grind. 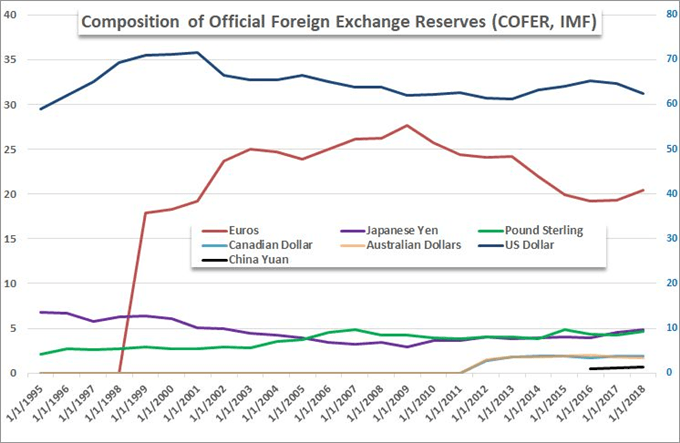 If we work from the perspective that the United States is attempting to secure its exceptional advantage on the global pecking order, we can start to appreciate some of the more explicable moves. In previous decades, China was employing an extreme policy regime meant to amplify its pace of growth and shift control over its bearings into the hands of Chinese leadership. Remarkably control over its own economy, trade and data reported left China in a seemingly unshakable position where it constantly rose through the ranks. That resolute climb however could only last for so long and confer only so much advantage before the country ran the risk of overheating or driving trade partners permanently away with uncompetitive policies. So, China has over the past few years attempted to move away from growth based on exports and questionable lending to focus on more reliable (and socially stabilizing) domestic sources of growth. In this shift, the target for a 6.5 percent GDP was announced and a crack down on financial corruption pursued. Along the way, the risk of an unexpected crisis or recession striking in a particularly vulnerable phase threatens to trigger fear among global investors and trade partners to question appetite for exposure to this Asian behemoth. 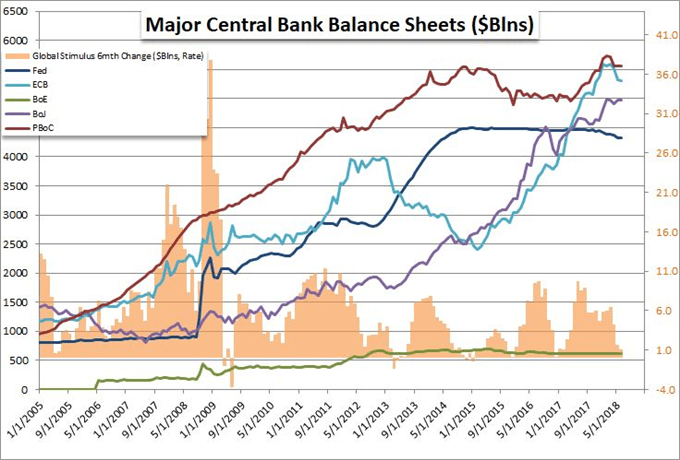 The Rapid Escalation and Next Steps

Considering the Trump administration's aims are to disrupt China's steady transition into a permanent high level player on the global stage, the more recent and inexplicable moves make far more sense. On the tariffs front, we saw a global metals tariff quickly turn to a direct $50 billion tariff target on China which in turn escalated to $200 billion a few weeks ago and now $505 billion (essentially all of China's exports to the US) this past week. What is the point of this accelerated series of import taxes? To ensure the country doesn't have room to maneuver and reduce the pressure being applied. The USDCNH for example has advanced nearly 10 percent over the past four months which helps to significantly reduce trade pressures. At $200 billion, it will be hard to employ a combination of local growth-supporting programs alongside a viable exchange rate manipulation scheme to maintains stability and the objective of transition to local dependency. When we move that figure to $500 billion, it wouldn't even be in the arean of feasible speculation. If we are following this line of logic, there is little chance that the US backs down - or that China won't readily pursue retaliation. that said, China's fuel is not as pervasive as the United States. Further in, China will attempt to recruit support from other aggrieved US trade counterparts while Trump administration's remarks about the uncompetitive dollar could be used as cue to start a messy currency war. If the US were simply working to tax China such that it forces compromise, there may have been measured blowback for America. However, fighting on so many fronts will produce a serious problem; a global range of counterparts that are committed to circumvent the pressure the US represents and subsequently a remarkable discount to the US dollar. We discuss this theme along with its investment/trade potential moving forward in today's Quick Take video.