The US Dollar Index (DXY) posted a reversal bar on a failed attempt to break out, more weakness expected in days ahead; euro to rebound a bit. Gold could bounce a bit, but look for trend to remain down, same with oil (watch important July slope).

As we noted in Wednesday’s session, the US Dollar Index (DXY) looked poised to pull back despite having slightly breached the November high. Yesterday’s reversal on a failed attempt to stay above 95.15 has focus shifted lower towards the trend-line running higher from the April trough. Additionally, around the trend-line is an important inflection point from last year around 94.10 which may come into play as support. For now, more weakness expected.

EUR/USD to rebound more off support

After briefly breaching the January 2017 trend-line, touching off on long-term support, the euro reversed course yesterday to put momentum back in favor of the top-side. It, like the DXY which is it is a large constituent of, has a trend-line running down from April which may cap an advance. More upside looks to be in store, but for now only corrective in nature. 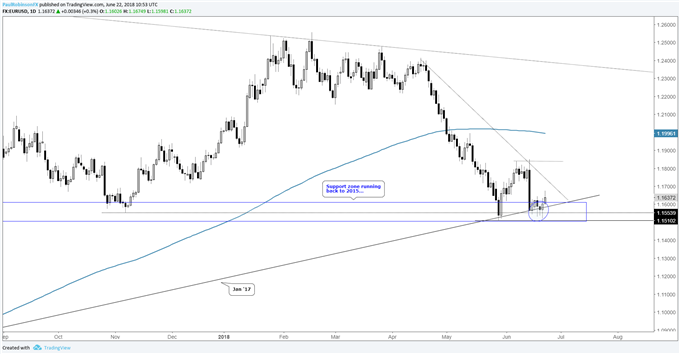 Gold may bounce a bit, but then weaken some more

Gold currently has no visible levels of support to lean on, but given its extended state and vulnerability of the dollar, we may see a recovery try to mount for at least part of next week. It’s at risk of failure though as both downward momentum and lack of meaningful support are in favor of short-sellers.

Looking lower, the April lower parallel may provide support if it is met, but at the angle which gold is operating on, the December 2015 trend-line and December low are likely to come into play as having potential for a big floor, if one is to develop.

In FX land, the GBP/AUD set-up discussed the other day is still on the table…

Gold Daily Chart (Bounce, then down…)

After taking a three-month hiatus as support, the July slope recently came back into play as support and has so far kept oil from declining further. It’s a tough spot for crude at the moment, as it has support at its feet but also resistance just ahead. It appears crude is merely undergoing a digestion of the move off the highs, but until the July slope can break there is still a chance for a stronger bid to come in.

The anticipation on this end, though, is the bounce won’t sustain above 67 and we see a meaningful break of the July slope develop soon. If this is case, the June ’17 trend-line and 200-day (in confluence) are likely to come under pressure.